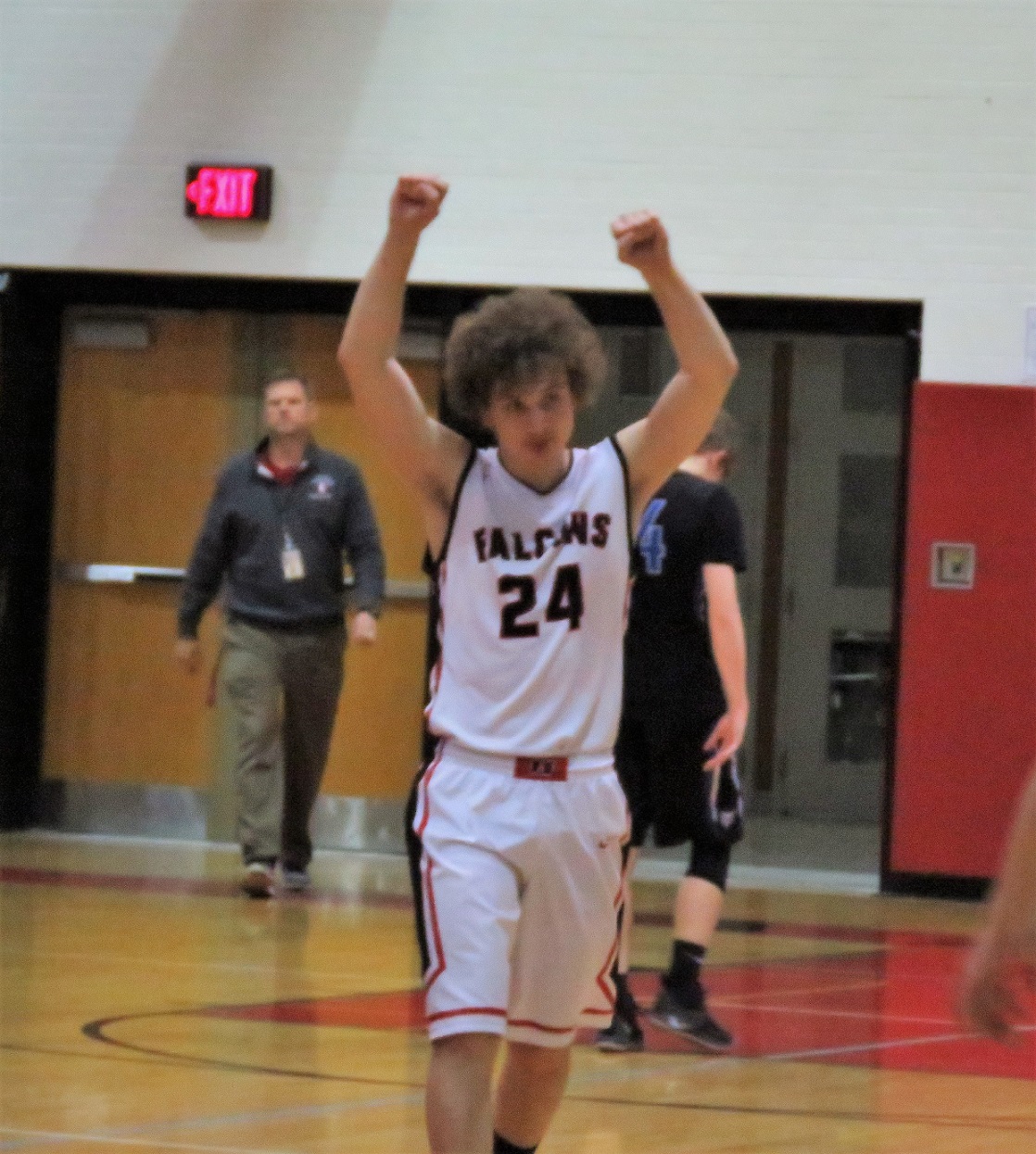 Niagara-Wheatfield senior Zack Stanley lifts his arms up as the Falcons defeat Kenmore West in round one of the Section VI Class A1 playoffs. Stanley finished with 13 points and five rebounds. (Photo by David Yarger)

Wednesday night, the Niagara-Wheatfield Falcons opened its Section VI Class A1 playoff run with a win over Kenmore West, 73-67.

It might not have been pretty at times, but come late February and early March, the key phrase is: “Survive and advance.”

The No. 6 seeded Falcons did just that, as the team used 11 3-pointers to get past the No. 11 seeded Blue Devils.

In the first quarter, after trailing 4-2, the Falcons went on a 12-0 run highlighted by treys from senior Zack Stanley and freshman TJ Robinson.

After back-to-back 3-balls from senior Raejaun Smith, the Falcons led, 20-9. Robinson added another 3-pointer to end the frame, but Ken-West was still in striking distance with the score 25-16, Niagara-Wheatfield.

Offensively, the second quarter was the complete opposite of the first for N-W.

The Blue Devils scored the first 6 points before a Stanley trey, but West’s Dylan James followed that with 6 points of his own to tie things up at 28.

At halftime, the Blue Devils were able to cut the Falcons lead to 31-30.

In the rough second quarter, Smith, senior Davon Ware and Falcons coach Erik O’Bryan were visibly frustrated at the outcome of the quarter. At halftime, O’Bryan said the message was simply to “figure it out.”

“If they can’t get on the same page then we’re going to struggle,” O’Bryan said. “They’re the best of buddies, so it was kind of like a little family fight. Families fight and we forgive and forget and we move on. … We’re family.”

In the third quarter, the offensive game came back to the Falcons, as Robinson and Smith scored for two, then Robinson nailed his third 3-pointer.

Up 38-37, the Falcons then embarked on a 19-5 run. On the run, Smith had 6 points, while Stanley and Robinson had 5, including a streak of three consecutive treys by Stanley, Ware and Robinson.

Ken-West still hung around, though, as James kept the Blue Devils in the game all night long as a force in the paint. James would finish with a game-high 25 points.

In the fourth quarter, after Roman Wright bucket, the Falcons lead was 63-50.

After Ware hit two free throws, Jacob Alvarez nailed a trey for the Blue Devils to tie the game at 65.

On the ensuing possession, Ware found a cutting Smith with a pass towards the hoop, which Smith banked of the backboard and in. And on the next offensive possession following the feed, Ware nailed a game-sealing 3-pointer, making it 70-65.

N-W added three free throws, while West added another bucket, and that was it.

For the Falcons, Smith finished with another double-double – 20 points and 10 rebounds – while Robinson added 18, Stanley netted 13, Ware chipped in 10 and Wright scored 7.

In years past, the Falcons have struggled to get past the first playoff game, but this year O’Bryan said his team expects to make a run in the postseason.

O’Bryan added he felt the Falcons could’ve put the game away early after a hot start, but regardless, he said, “I’d rather have what we had. I’d rather have a good game with the crowd into it and you only get so many. So, I have no problem with these close games.”

The Blue Devils brought a high zone defense to play Wednesday night, and O’Bryan said Ware played it perfectly, setting up his teammates and scoring when he could.

“Davon was really good on being patient and allowing the game come to him tonight,” O’Bryan said. “He was picking it apart just slow-playing it, and that was a big step for him tonight. … Because of him, Rae had his 20, TJ had his 18 and then Zack had 13. … We had four guys in double figures with a 6-point quarter.”

O’Bryan also praised Robinson for his efficiency shooting the 3-ball and said by him knocking down shots, it opens opportunity for Ware to find Smith under the hoop for two, or opens up 3-point opportunities for Stanley, who O’Bryan said, percentage wise, he’s the most efficient.

Up next for the Falcons is a familiar foe: the No. 3 North Tonawanda Lumberjacks.

The rivalry battle is for a ticket to head to the Section VI Class A1 semifinals at Buffalo State – somewhere the Falcons haven’t reached since 2005.

N-W lost two matchups versus NT in the regular season, the most recent a 68-60 loss, where the Falcons had a chance to tie late, but turnovers doomed the team.

O’Bryan said he knows what to expect from the Jacks.

“They’re going to do their 2-3 zone; they’re probably going to play it a little bit high to take Davon away; and we gotta have guys that are gonna step up like they have all year. We’re not scoring almost 70 points a game for no reason – it isn’t one guy. … We just have to remember to trust each other and do those things on the offensive end. … We’ll be ready. I said at the beginning of the bracket, I think they’re the best team in the bracket (Class A1). It’s a very competitive bracket,” O’Bryan said.

With the team having to go through two familiar Niagara Frontier League teams to reach its goal of Buff State, O’Bryan said he received some tidbits from 50-year coach Don Miller, who is around the team for every game.

“He’s always awesome to have on that bench. He goes, ‘You got no scouting; you know both teams.’ He goes, ‘I know it gives you a little sense of nervousness, because you played both. They’re going to try and combat something and come at you, but at the end of the day, you know exactly what they’re going to do and what their personnel is,’ ” O’Bryan said.

The Falcons quarterfinal battle with the Lumberjacks starts at 1 p.m. Saturday at North Tonawanda High School.