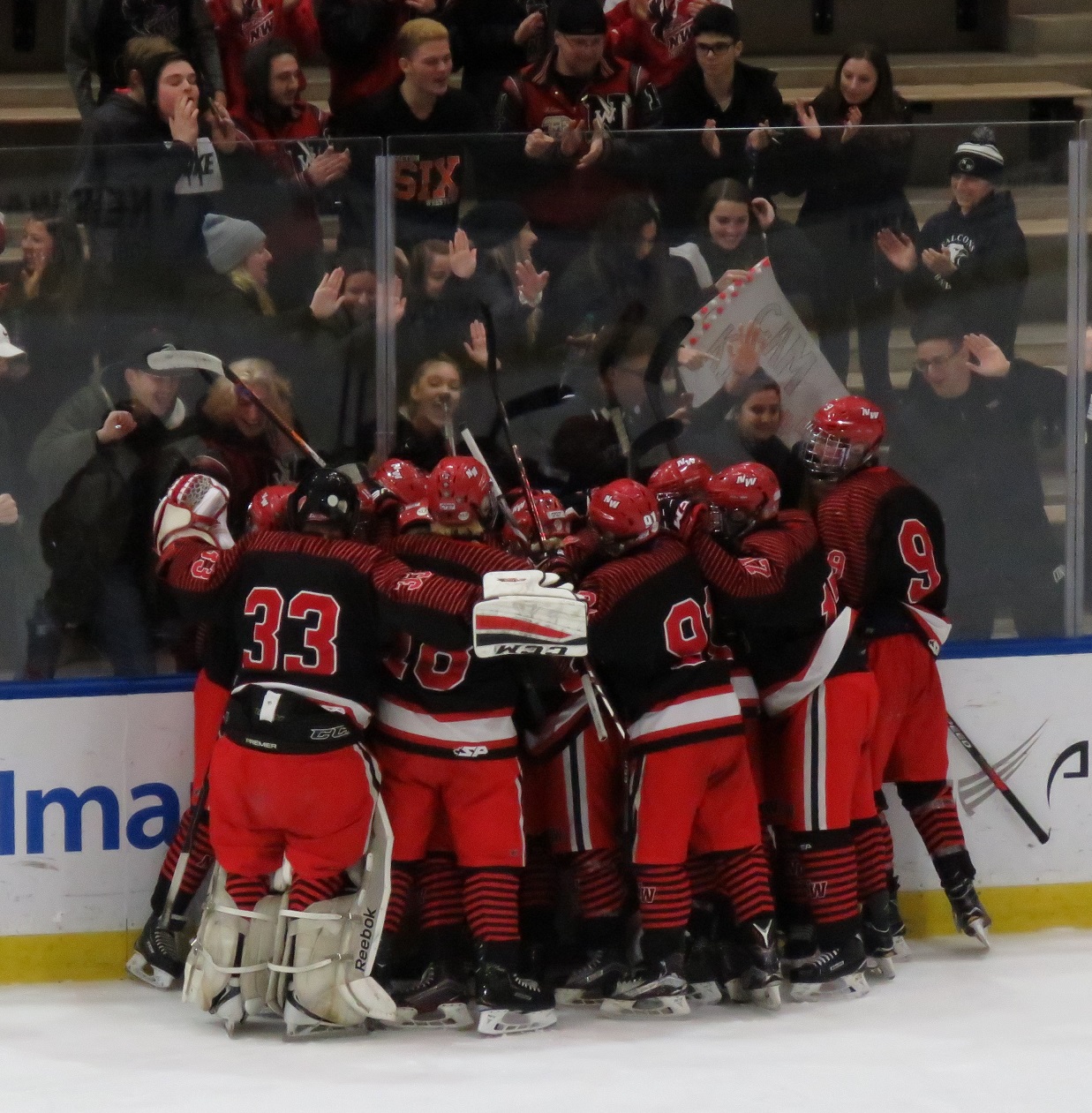 Coming into the postseason, many questioned how far the Niagara-Wheatfield Falcons hockey team could go. Despite a regular season record of 10-10, the Falcons didn't let the number put any dampers on a run to the Section VI large school championship.

The Falcons started quickly with a goal 50 seconds into the game by Ben Shapiro. The sophomore's sixth goal of the season gave N-W an early lead, 1-0.

Lancaster answered around eight minutes later with a goal, tying things up at one.

With the score tied after one period, the Falcons took off and never looked back.

Less than three minutes into the second period, Austin Durandetto's goal from Anthony Delisanti and Tyler Belter gave the Falcons the lead for good.

Ben Foster netted his first of two goals later in the second period and launched the puck the full length of the rink for a shorthanded empty-net goal to seal the deal and give N-W a 4-1 win.

In net, senior captain Peyton Siegmann was stellar once again in another postseason outing. Siegmann's 34 saves helped keep Lancaster off the board after the first period. Siegmann, who was trying to net a goal from his crease with an empty net, also received a point for an assist on Foster's empty-netter.

For the Falcons, the win sends the team to a second-straight Section VI large schools final. Last season the team defeated Williamsville North, 2-0, to  begin a run to the New York state finals.

After a winless January and a regular season that came with its fair share of struggles, coach Rick Wrazin was pleased his boys would be heading back to the finals.

"It feels great. We knew we could do it. We were 10-10, but kind of the whole league was -- everybody was really close down the stretch. … Right now, it's a coin toss every game. Everyone who's playing is pretty evenly matched and they're great games. This was part of our goal coming in and it's great to be back," Wrazin said.

After pitching a shutout in net versus Clarence to reach the semifinals, Siegmann, who Wrazin called a "gamer," said he enjoys the big games and, as a senior, he knows he has to bring his best night in and night out.

"As a junior and a senior, last year, I played good in the playoffs, too. It's all for the seniors. You just got to go hard, give it your all. You never know (when) it could be your last shift, last game, last time playing hockey, so you wanna give it your all for everybody out there, no matter if you're an underclassmen, an upperclassmen. You just gotta go hard every shift," Siegmann said.

The senior goalie added he's received stellar defense from his team and they help make his life easier in net.

"When I mess up they got my back, and when they mess up I got theirs. I mean, its a brotherhood around here. I love it," Siegmann said.

Foster, of his two-goal night, said he was happy to contribute to the Falcons' win.

"It was pretty nice," Foster said. "It's always nice to get a couple goals and help the team win the game."

Wrazin added, "We know he can score. He's a guy that hits the net when he shoots from the point all the time. … He's got some offensive ability for a defenseman and he can shoot the puck."

Foster and Siegmann agreed that getting back to the finals is also thrilling, knowing the ups and downs the team has gone through this season.

"In the beginning of the year, it was a rough start. Nobody expected us to do anything," Foster said. "We came out with a goal (that) we were going to prove them wrong. … We're trying to go back-to-back in this section again and get two in a row."

"We're a playoff team. We always show up in the playoffs no matter what position we come in in the regular season," Siegmann said. "We all show up, we all give it our all for each other. It's a brotherhood, like I said, and we just play like we're family."

Up next for the Falcons is the winner of the Orchard Park and Williamsville North semifinals game. During the regular season, N-W lost both matchups versus OP, and split the season series with the Spartans. Wrazin said he expects another good outing from his team.

The Falcons look to hoist a second-straight Section VI title at 7 p.m. Sunday at KeyBank Center.