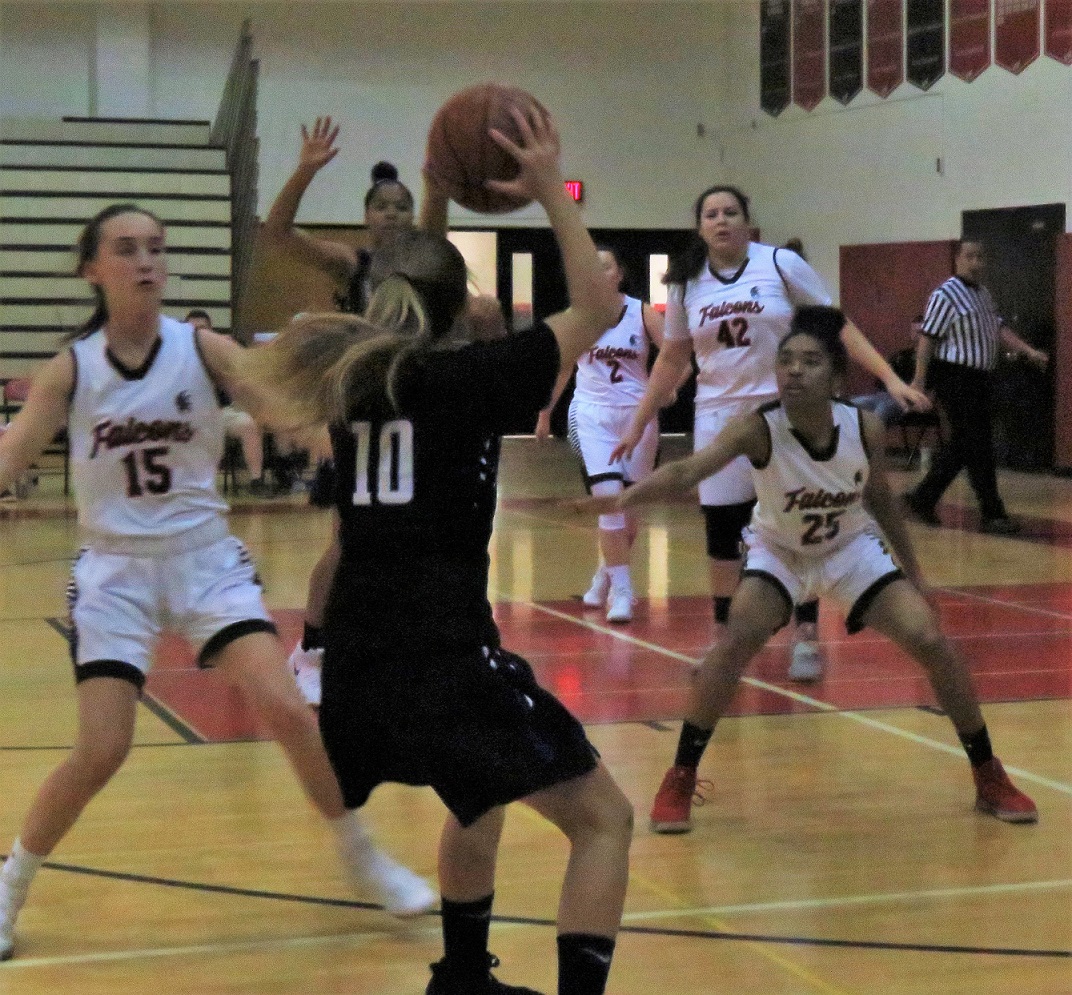 Defense like this from Corin Loughrey (No. 15) and Le'Gary Jackson (No. 25) made life difficult offensively for the Kenmore West Blue Devils. (Photo by David Yarger)

Monday night, it didn’t win a championship, but it helped the Niagara-Wheatfield girls basketball team secure a 45-20 victory over the Kenmore West Blue Devils.

A stifling zone defense put on by Falcons coach Gary Jackson made life miserable for Ken-West, which cause the Blue Devils to shoot a plethora of tough contested shots from behind the arc.

The Falcons got off to a 10-0 lead to set the tone early. The Blue Devil’s first bucket came with 4 seconds left in the quarter.

The second quarter was exactly like the first, as the Falcons held the Blue Devils to two points again and carried a 21-4 lead into halftime.

At halftime, Le’Gary Jackson led all scorers with 6 points, while Sydney Crangle and Mackenzie-Mae Smith chipped in 5 apiece.

The third quarter was much more tightly contested, as the Blue Devils were able to sink multiple shots, including its first 3-pointer of the game. The Falcons still won the quarter, though, 11-9, and took a 32-13 lead into the final frame.

In the fourth quarter, Jenna Bailey nailed two 3-pointers, with the latter stretching the Falcons lead to 27 points – its highest of the night.

West added a bucket to break into the 20s, but the Falcons smoothly sailed to victory, 45-20.

For the Falcons, Le’Gary Jackson led the way with 12 points, while Bailey and Crangle added 9. Additionally, Mackenzie-Mae Smith had 7 points, Elizabeth Beutel tossed in 4 points and Amanda Klettke and Corin Laughrey added buckets.

The win is also a revenge victory for the Falcons, as the Blue Devils defeated the team earlier in the year, 41-33. The victory also increases the team’s Niagara Frontier League record to 6-4 and inched the team to within one game of the third-place Lockport Lions.

Gary Jackson said the win was an important one for the team to boost its sectional seeding.

“Tonight, we’re just kind of building off what we’ve been doing,” Gary Jackson said. “We finally got our confidence and we really needed this win tonight. It’s a big win, because if we win the next two (games), then we move way up in the bracket – we move from around sixth to second (place). So that’s what we’re trying to do right now and make it to the conference (NFL) championship game.”

Of the team’s defense, he said the team tries to imitate the defensive scheme of the Syracuse Orange NCAA team, which plays a tough and lengthy 2-3 zone. With that being said, Gary Jackson said the Falcons’ length plays a huge role in making things tough for opposing offenses.

“We try to use our length, use our arms,” he said. “We got Le’Gary on the strong side all the time with her length, and we rotate really good in the zone. Whenever we rotate in the zone, we think, in our minds, nobody can penetrate our zone.”

“We talked about that, we worked on it in practice. We worked on getting good position for offensive rebounds. Tonight, they did it. Le’Gary did it more outjumping everybody; Mackenzie did it more by getting her body in position and it worked very well for us tonight,” he said.

The Falcons (7-8 overall) are back in action at 7 p.m. Wednesday on the road at North Tonawanda.