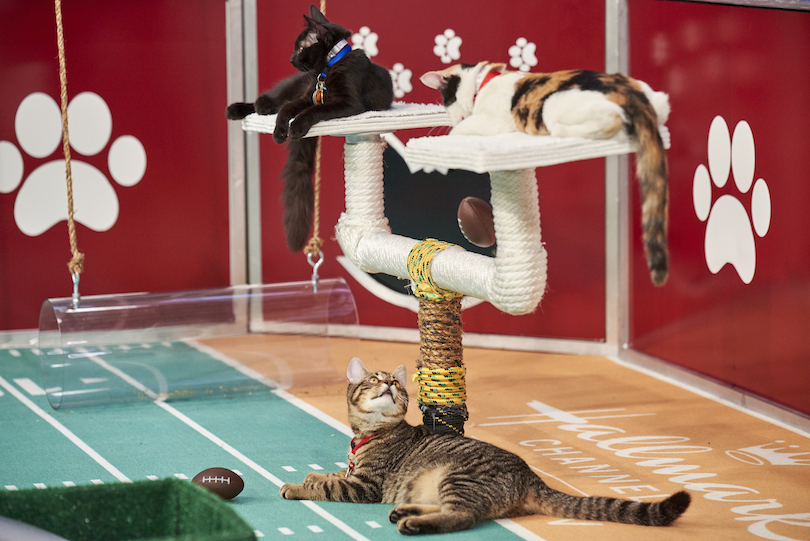 Part of Hallmark Channel’s ‘Adoption Ever After; initiative to showcase beautiful animals available for adoption

Hallmark Channel will present the first “Cat Bowl” tonight, as part of the network’s core philanthropic effort “Adoption Ever After.” The initiative uses entertainment programming to showcase animals available for adoption in neighborhoods all across America. “Cat Bowl” will premiere exclusively on the network at 10 p.m. ET/PT.

“Cat Bowl” is a companion program to the network’s storied pet franchise, “Kitten Bowl,” the first animal competition on television to create awareness for the plight of homeless animals and the joys that adopted pets bring to our lives. The “Kitten Bowl” franchise is responsible for the adoption of more than 25,000 shelter pet adoptions over five years through partnership with North Shore Animal League America and its shelter partners across the country.

“Cat Bowl” will showcase adorable and adoptable adult “cat-letes” as they compete on the gridiron for a special place in viewers hearts. Inspirational stories of senior and special needs cats will highlight the special event.

During each year’s broadcast of “Kitten Bowl,” awareness for pet adoption rises dramatically. Hallmark Channel announced that, with its partner North Shore Animal League America, “Cat Bowl” and “Kitten Bowl” are part of the biggest pet adoption event in the country. More than 500 shelter partners will showcase local animals available for adoption from Feb. 2-16.

TV personality, author and animal advocate Beth Stern is the host for this year’s event from Hallmark Channel Stadium. Stern is joined by Hallmark Channel star Alison Sweeney and “Home & Family” co-host Cameron Mathison for all the play-by-play action. The special will also feature “Where Are They Meow,” stories that follow up on some former “Kitten Bowl” cat-letes such as Jerry Mice, Puma Esiason and last year’s star, Swirl.

North Shore Animal League America and Last Hope Animal Rescue and Rehabilitation drafted the cats for a more heartwarming “Senior Bowl” than has ever taken place on the gridiron.

Hallmark Channel’s “Adoption Ever After” is committed to educating the public about the many rewards of pet adoption in hopes of inspiring viewers to open their homes and hearts to shelter pets.