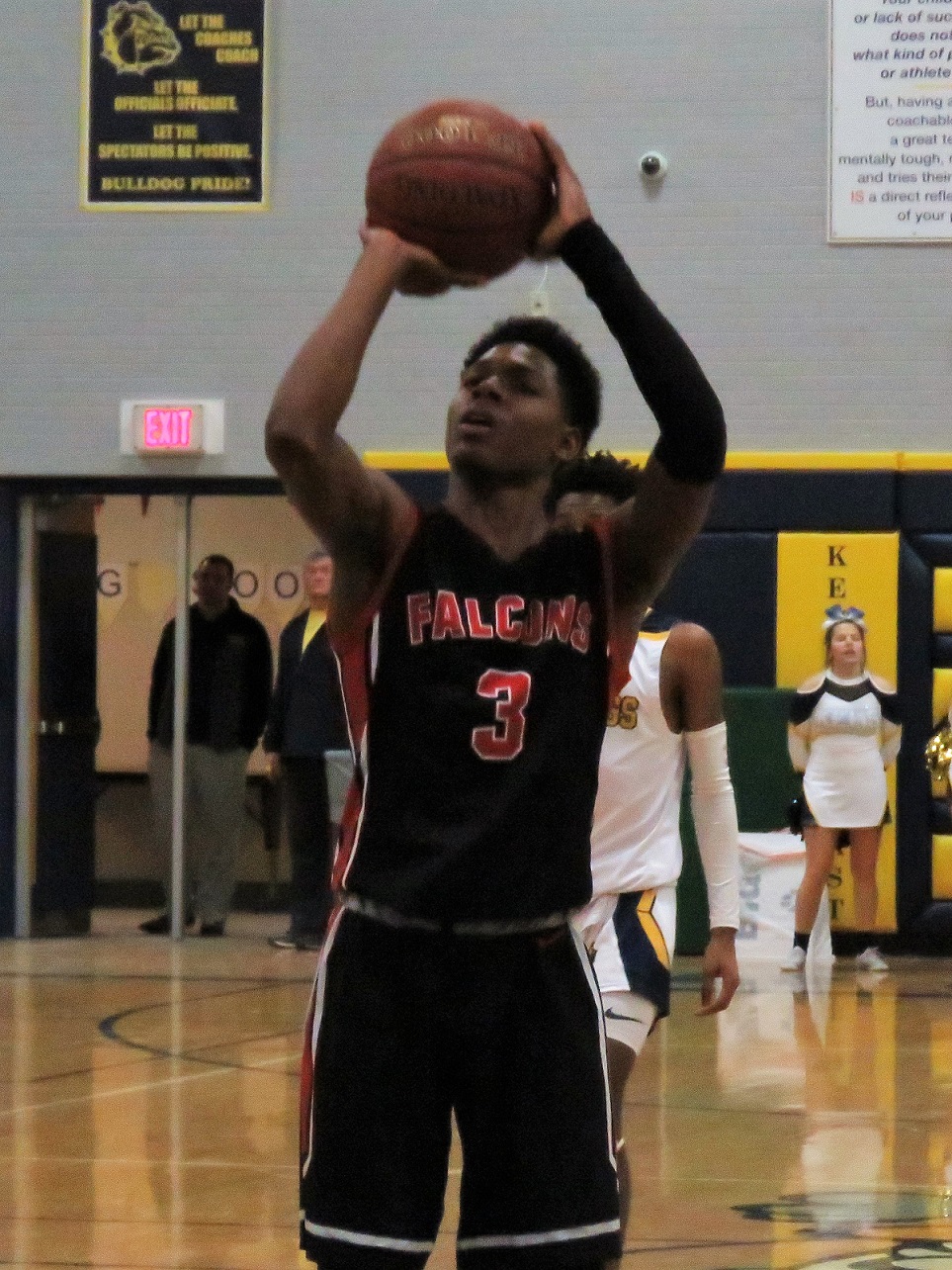 Raejaun Smith sinks a free throw late in the game to help the Falcons secure a victory. Smith had 14 points in the win. (Photos by David Yarger)

Niagara-Wheatfield’s Raejaun Smith would be the first to admit he’s been struggling at the free throw line the past couple games. Despite the struggles, Smith came through when it mattered most for the Falcons.

The Falcons defeated the Kenmore East Bulldogs 71-69 Friday night, in what was a thriller from start to finish.

East got off to a quick 8-0 lead before Smith made the first Falcons basket with 3:24 left in the first quarter.

Down 12-4, the Falcons embarked on a 10-2 run to finish the quarter, capped off by a free-throw line jumper from Ben Salomon that tied things up at 14 to end the frame.

Free throws harmed the Falcons in the second quarter, as the team went a combined 4/9 from the stripe.

Out of the break, East came out firing on all cylinders.

With the score deeming 33-31 in favor the Falcons, the Bulldogs’ Nate Murdie went unconscious shooting the ball.

Murdie scored 13 straight East points, including back to back treys to make it a 44-38 game.

Tuesday, against Grand Island, Falcons freshman TJ Robinson lit a spark into the N-W offense in the third quarter, which helped propel the team to victory. Robinson was at it again Friday night, as he scored 11 of the team’s final 13 points of the quarter.

Down 46-40, Robinson nailed back to back 3-pointers to tie things up.

After buckets by N-W’s Clay Ruhland and Murdie, Robinson finished the quarter with a final 3-pointer, giving the Falcons a 51-48 lead heading into the fourth quarter.

In the final quarter, it’s safe to say it was back and forth.

The game was tied seven times and the lead changed nine time in the final eight minutes.

Ironically enough, N-W would win the game at the free throw line after struggling early in the game, and East found themselves struggling at the stripe.

Down 65-63, East’s Amari Gordon made a bucket, then on the ensuing possession drained two free throws to give the Bulldogs a 67-65 lead.

Ware was quick with an answer, though, as the senior drove the length of the court and sunk a tough and-one layup. Ware drilled the free throw, giving the Falcons a 68-67 lead.

Gordon answered right back with a bucket of his own, making it 69-68, Bulldogs.

On the next Falcons offensive possession, Smith was fouled down low fighting for a rebound and went to the line for two.

After missing over 10 free throws between Tuesday and Friday night combined, Smith sunk two clutch and pressure-packed free throws to give the Falcons a 70-69 lead.

The game was won and lost at the free throw line, as Gordon, who finished with 14 points, was fouled with 7.7 seconds left.

Gordon missed both free throws and the second shot was rebounded by the Falcons’ Roman Wright. Wright was immediately fouled.

After missing the first, Wright came out of the timeout and drained the second nothing-but-net.

On the inbounds, Gordon took the ball the length of the court and found an open 3-pointer for the win at the top of the key, but the shot was off at the buzzer.

For the Falcons, Ware led with a team-high 17 points, while Smith, Robinson, Wright and Zack Stanley added 14, 13, 9 and 8 points, respectively.

For the Bulldogs, Murdie led with 22 points, while D’Anzo Young and Gordon added 19 and 14, respectively.

The win improves the Falcons overall record to 5-6 and Niagara Frontier League record to 3-4. The victory also gives N-W back to back W’s for the first time this season.

N-W coach Erik O’Bryan, who gave high fives to all the Falcons students in attendance following the final buzzer, named a few terms to describe the victory: Outstanding, energetic, and enthused.

“I think we lose that game maybe last year or two years ago, just because of the culture we had. We’re trying to gain that culture back that we used to have. We’re just hard workers. We play together, do what we have to do and at the end of the day it is what it is,” O’Bryan said. “I reminded them, they (East) had a great third quarter, but the score was still 51-48 (in N-W’s favor). It was 28-25 at half. There’s no dent. I just said ‘Clear your minds and focus up and lets go get this together.’ ”

O’Bryan added that the third quarter was like a repeat of past years versus Kenmore East, where the Bulldogs will catch fire shooting the ball. He said it affected the team then, but this year, his team was able to shake it off. O’Bryan also announced how important the victory really was for the team.

“At the end of the day, it’s a road win in the conference and we get another five points for winning tonight and it just increases our rank in the (Class) A1 standings, and that’s all we’re looking at,” O’Bryan said.

Walking out of the locker room, Smith said, “I finally made them free throws,” and O’Bryan found a way to spark some fun out of it.

“We were just joking in the locker room. I came in and we’re all dancing and I go, ‘Hey! Raejaun made free throws!’ and everyone was going nuts,” O’Bryan said with a laugh. “It’s nice to see their faces like that. They work hard. It was a very good high school basketball game and it was very fun to be a part of. Luckily, for us, we made some key plays. We didn’t defend very well, obviously, but, man, we had some key steals or rebounds, though. We just have to continue to get better, but it’s easier to get better tomorrow morning with a win than it is to try and fix it with a loss.”

The Falcons are back in action at 6:30 p.m. Tuesday versus CSAT at home. 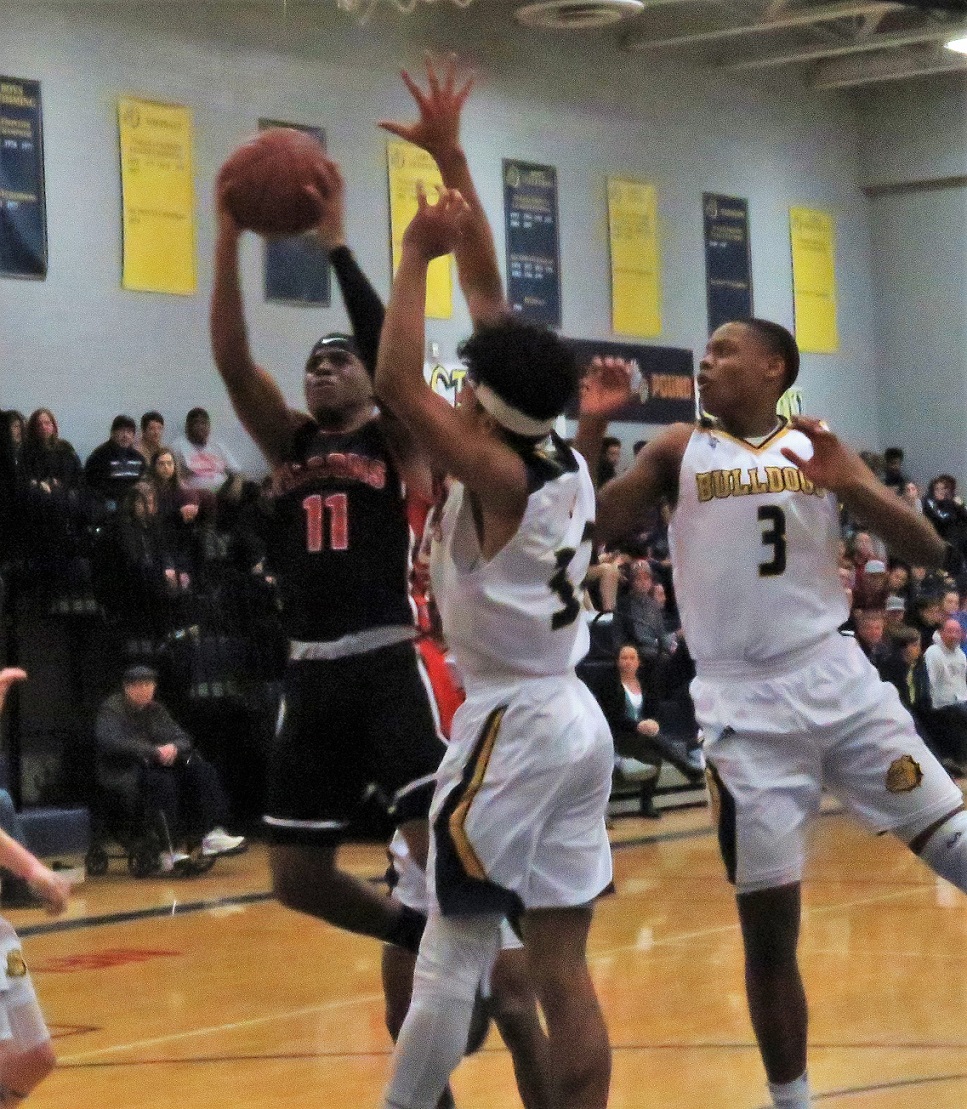 Davon Ware (No. 11) drives to the basket for a layup while drawing the foul. Ware had a team-high 17 points in the Falcons victory.