This year’s game was played at Notre Dame Stadium, home of the Notre Dame Fighting Irish football team, with the Boston Bruins defeating the host Chicago Blackhawks 4-2. The sellout crowd of 76,126 was the second-largest ever to attend an NHL game.

The TAD of 2.968 million viewers for the game is the best for an NHL regular-season game since the 2015 NHL Winter Classic (3.481 million), which featured the Blackhawks against the Washington Capitals from Nationals Park in Washington, D.C. The 2019 Winter Classic is also up 20 percent vs. last year’s game between the New York Rangers and Buffalo Sabres from Citi Field in New York City (2.483 million). The TV-only telecast drew a 1.63 HH rating, up 15 percent from last year’s game (1.42).

Digitally, Bruins-Blackhawks set Winter Classic records for all major metrics, including uniques (75,963), total minutes (4.7 million), and average minute audience (22,454 viewers), with those figures being up 38, 51 and 45 percent, respectively, vs. the 2018 game.

Locally, Boston delivered a 7.9 rating, best in the nation and the third-best rating ever for the market for a regular-season NHL game on NBC. Following are the top 10 local market ratings for the 2019 NHL Winter Classic: 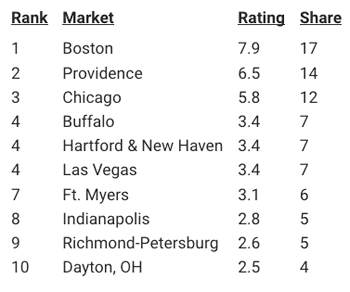