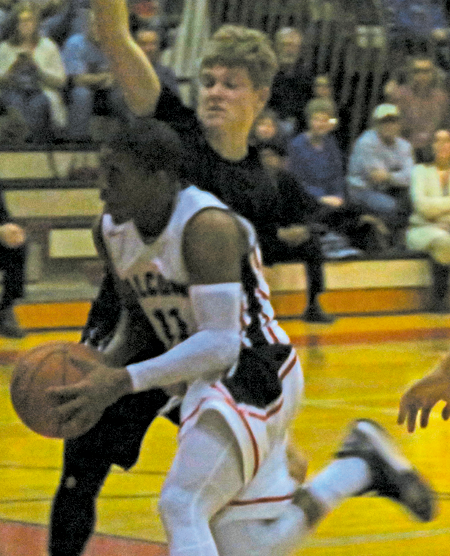 Davon Ware drives to the hoop Tuesday night versus Kenmore West. Ware led the Falcons to victory with a game high 22 points, including 19 in the second half. (Photos by David Yarger)

On Tuesday night, the Falcons used every second to close out its first NFL win versus Kenmore West. N-W defeated the Blue Devils, 61-59, after being down by 7 points at halftime.

The Falcons started slow offensively, as they’ve done in the first couple games of the year, as the team could only muster 8 points in the first quarter and trailed, 12-8.

In the second quarter, Davon Ware nailed a 3-pointer to finish the half, which cut the Blue Devils’ lead to 26-19.

The shot was a sign of things to come for Ware, who went on to score 19 points in the second half.

To start the half, Zach Stanley, Ware and freshman TJ Robinson nailed 3-pointers to cut into the Kenmore West lead. After two free throws from Raejaun Smith and a Ken-West free throw, the Blue Devils led, 33-30.

Stanley tied the game up with his second 3-pointer, and then Ware scored the next six Falcons points, giving N-W a 39-35 lead.

Buckets by Smith and a 3-pointer from Robinson gave the Falcons a 44-39 lead heading into the fourth quarter.

The Blue Devils cut the lead to three – 46-43 – but every time Ken-West inched closer, Stanley was there to knock down a 3-pointer. His third 3-ball gave the Falcons a six-point lead.

Up 49-45, Ware and Roman Wright scored the remaining 12 points, but the Blue Devils made things interesting.

With the Falcons up 60-55, the Blue Devils got a quick bucket, a turnover off the inbounds pass and another score to make it a 60-59 contest. N-W was able to get the ball inbounds to Wright, who was then fouled. Wright made one of two free throws, giving the Blue Devils a chance to tie or win.

With just over 10 seconds left, Kenmore West dribbled down the court and found Dylan James in the post. James had dominated in the paint with 17 points and several offensive rebounds. James put up a shot off the backboard with one second remaining that hit the front of the rim and out as the horn sounded.

Niagara-Wheatfield coach Erik O’Bryan wasn’t particularly pleased with how the team played, but said a win is a win any day of the week.

“That first half I don’t even know what I was watching. All credit to Kenmore West, they were moving the basketball, they were more physical, they had a little bit more team-oriented basketball going on. We looked a step slow for some reason.

“At the end of the day, as bad as we did, they had 26 points (at halftime). We couldn’t make a shot. … We talked at halftime, we stayed positive. They guys were fortunate to only be down seven.

“All in all, to come out Friday with a tough one where I thought we deserved it, (then) to steal one at home; it’s a big win – it’s a league game. Any win – I tell these guys – is a big win,” O’Bryan said.

O’Bryan admitted, the Blue Devils deserved to win after how hard they played, and said James was a dominating force in the paint for West.

“Credit to both of them, but I feel we shot ourselves in the foot and gave them that. And we almost did it tonight. We play fast and sometimes it goes against us, but I felt tonight we were able to find a rhythm and figure it out,” O’Bryan said.

For the Falcons, Ware led with 22 points and was followed by Robinson, Wright, Stanley and Smith who added 11, 10, 9 and 6 points, respectively. Ware’s second half eruption was no surprise to O’Bryan who said Ware has grown over the years in his time at N-W.

“He’s come a long way,” O’Bryan said. “Our relationship has come a long way. He listens, he tries to do a lot – sometimes too much – but he’s starting to understand that … he’s getting it. He’s a hell of a player, and he’s a tough defend, especially when he gets in a rhythm where he starts to move that basketball. Now … the ball started moving a lot quicker, a lot of things open up.”

The Falcons will look for a second consecutive victory at 6:30 p.m. Friday as they go on the road to face North Tonawanda. 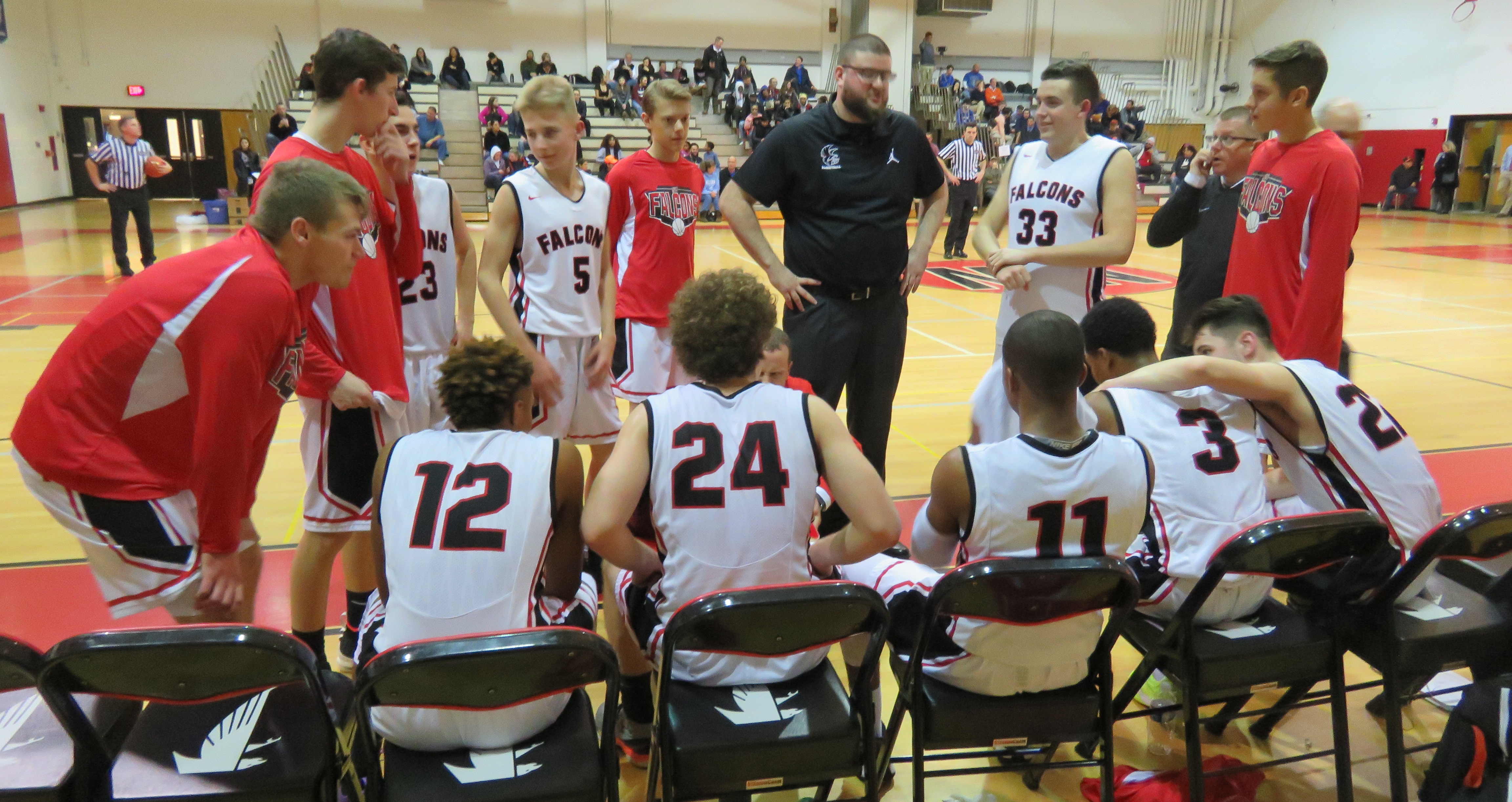 The Niagara-Wheatfield boys basketball team talks it out during a timeout versus Kenmore West Tuesday night.