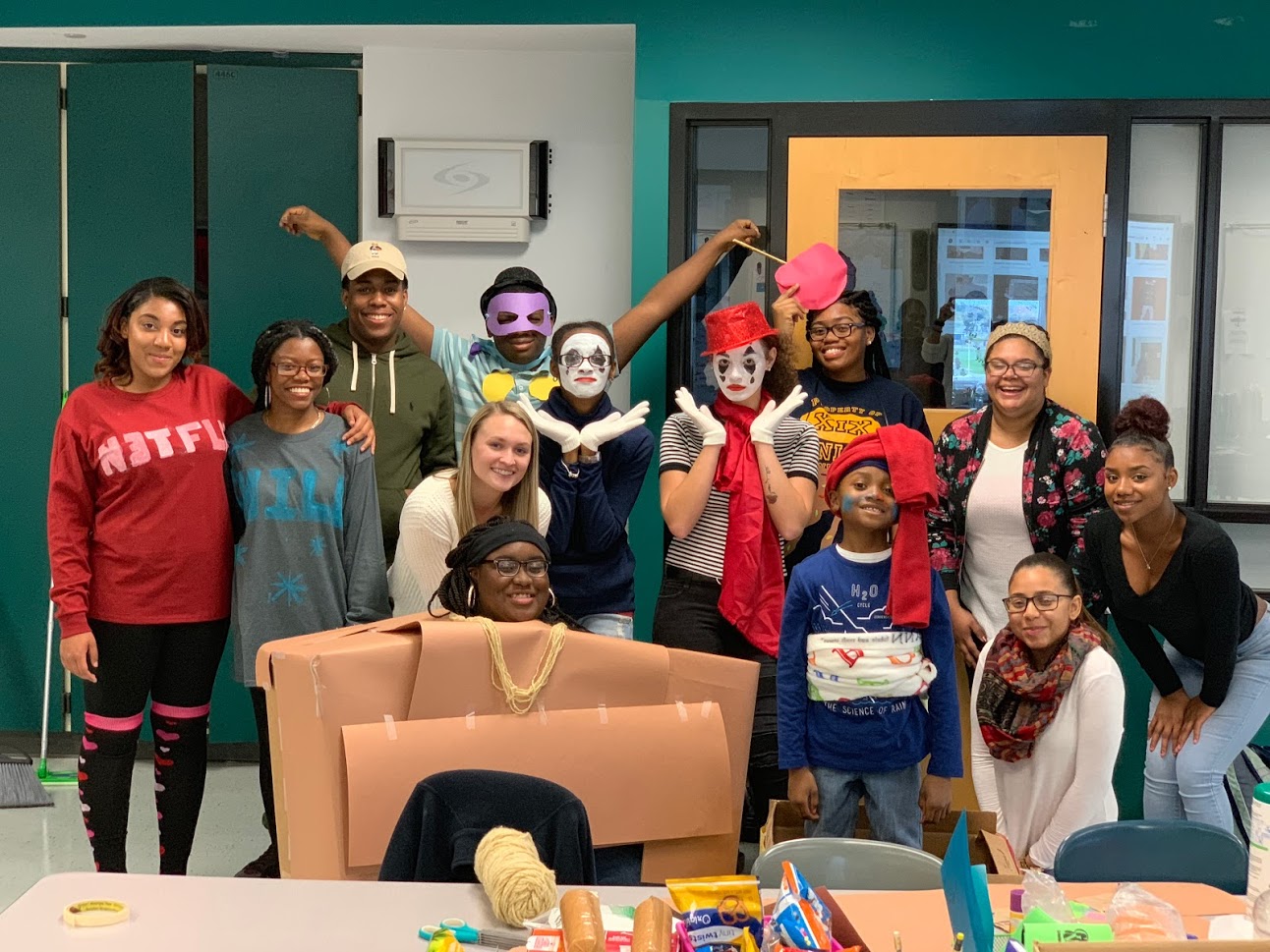 Student mentors of Niagara University take a group photo with their mentees from Niagara Falls High School during a costume remix event. The program, "Big Eagle Little Eagle," ran by Simone Beckford, held a program using recycled materials from an art studio to come up with costumes for mentors and mentees.

Don't 'Make it out the hood,' change it!

Sat, Dec 1st 2018 02:00 pm
A current Niagara University student shares his thoughts and experience with bettering the community of Niagara Falls.
By Mekhyi Bristol
Special to Niagara Frontier Publications
Niagara Falls is known as one of the natural wonders of the worlds. However, the community that surrounds it is may not be considered as wonderful.
It was the summer 2017, and I was excited to attend school in Niagara Falls. Expectations were set high with the attraction of the falls and the good publicity centered on it. My eyes lit up.
After living in the Niagara Falls for a couple of weeks, expectations and biases I had prior to residing in area started taking a turn for the worse. As I begun exploring Niagara Falls, I ran into many communities, areas and places that sparked questions. The sub-communities in Niagara Falls were different in many ways and one would see disorganization in its structure.
As I drove around, I would see a mass amount of abandonment in the area. Abandoned towns, abandoned buildings, abandoned lots and just tons of emptiness.
In an interview with Mike Skowronski, assistant director of career services at Niagara University, he explained his disappointment with the way Niagara Falls has been declining in numbers over the last couple of decades. "We need change; someone young that can make Niagara Falls a place people want to live gain."
More and more residents of Niagara Falls has expressed the same feelings about the decline of growth in the area they once saw was a fun place to live.
In an article written by the Niagara Gazette, it explains the decline in the population of Niagara Falls in 2011. In more recent years, the numbers of decline in Niagara Falls is even greater with only 46,000 residents in 2016.
Months after my arrival, I get to learn more and more about the area. I learned things such as most restaurants are fast food chains, which can impact how people are cultured, and places a cap on being more educated on different groups. I learned that there is a lot of ghettos and gang violence happening in the Falls.
But that has much to do with the Niagara Falls not being properly funded. A dispute has been spiraling for a while about the revenues of the Seneca Casino and its impact on the financial situation on Niagara Falls. In an article published by Channel 2 news, it explains the financial dispute of the Seneca casino and Niagara Falls.
I also learned there's little to nothing to do in the community of Niagara Falls. Not much parties, clubs, sporting facilities, bars or places for entertainment so residents of this area has to travel to nearby areas such as Buffalo or Cheektowaga to have a good night out. During a chat in a local barbershop, the conversation arose with what Niagara Falls has to offer. Other than affordable housing, there was no other benefits. There's no nightlife, violence occurs often and there's not much opportunities.
A local said "My stay is temporary. I'm saving my money and then I'm leaving. You know it's bad when you have to travel to Toronto attend a sold-out event."
I realized something: What good is moving going to do? You have a community. If the community has a vision, then make it happen. "Don't make it out the hood, change it." Making it out the hood is a popular phrase that means moving up the social status. It's a person living in poor conditions becoming successful and moving out into a richer area.
I am only a visitor to this area, I was born in raised in Brooklyn. I strongly believe there is opportunity for change. On the flipside, change just doesn't happen overnight, it's a process. Don't move out and have to migrate because the community has nothing to offer, make it have something to offer. Mahatma Gandhi said, "Be the change that you wish to see in the world." The community of Niagara Falls should be the change it wishes to see.
I had the opportunity through my school to make a small change in the community. The
"Big Eagle Little Eagle" program assists mentees through the transition from high school to college, using positive mentorship and guidance. Niagara University student mentors empower youth in our community to make positive life choices that enable them to maximize their potential. 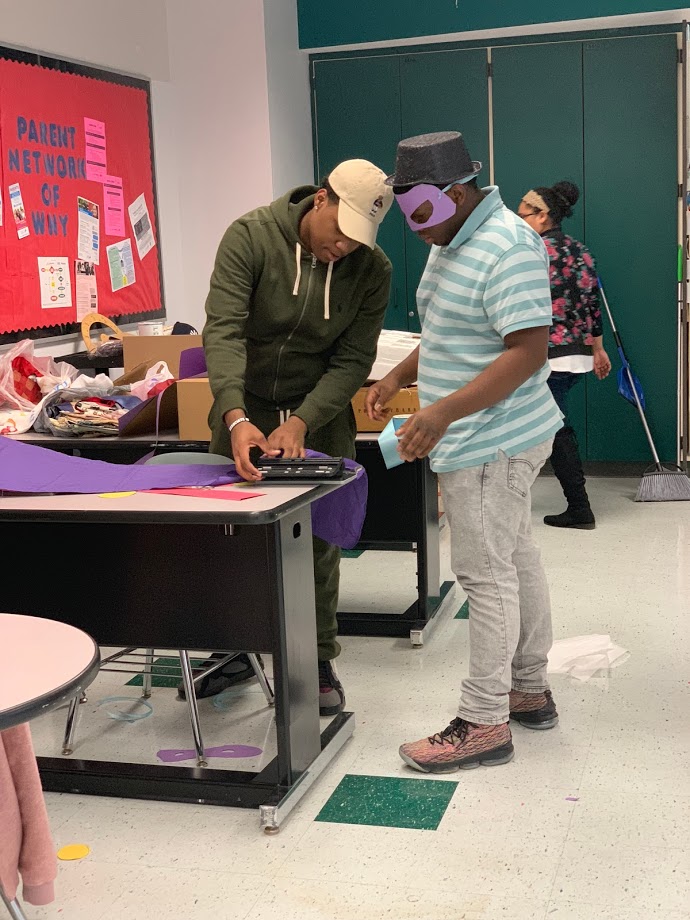 My mentor is an African-American male student who has a strong character and is very caring, but can use a bit of guidance or someone to talk to. We should be raising young kings and queens, pushing for an education and setting goals for our youth. I got the opportunity to learn much about him from our weekly encounters - things such as loving anime and how much it inspired him to get into art and begin writing his own graphic novels. He infuses these novels with his passion for animals and continuous quest to learn as much as he can about wildlife. If I can inspire him to continue to pursue these passions, he can grow and be a benefit to the people around him in the future.
There are much more programs and opportunities to help the people of Niagara Falls, such as Community Missions, a notable religious, community-based nonprofit organization known for providing residential and support services in the community of Niagara Falls. More information can be found at https://www.communitymissions.org/.
I feel like it's important for people to come together and make a change rather than look for affordable housing in nearby cities. Niagara doesn't just have to be the Niagara Falls tourist attraction and nothing more. But it takes a community and strong leaders to ban together for change.
In a vision, I view change in Niagara Falls in introduction of new businesses. More nightlife for residents and tourist to enjoy. People should be driven to start building the area in Niagara Falls so they can make a mark on the community. More cultural-centered restaurants to allow for an introduction into different cultures and lifestyles to educate people. A stable boys and girls club that benefits and motivates young males and females to succeed. This will offer mentoring, help with homework and place these youth in front of role models who are making change in the community.
"Niagara used to be that place people wanted to visit. It was fun and people would always come here to visit and there was tons of things to do. It used to be the big brother in Western New York. Now it's just depressing to even live in Niagara today," according to an elder who was raised in Niagara Falls.
We can make a change!
•••••
Niagara Frontier Publications works with the Niagara University Communication Studies Department to publish the capstone work of students in CMS 120A-B.
These articles do not necessarily reflect the opinions or beliefs of NFP, NU or the communication studies department.
Comments can be sent to the NFP editorial department, care of the managing editor.
Categories
NUsUnlimited NUsUnlimited Side Story