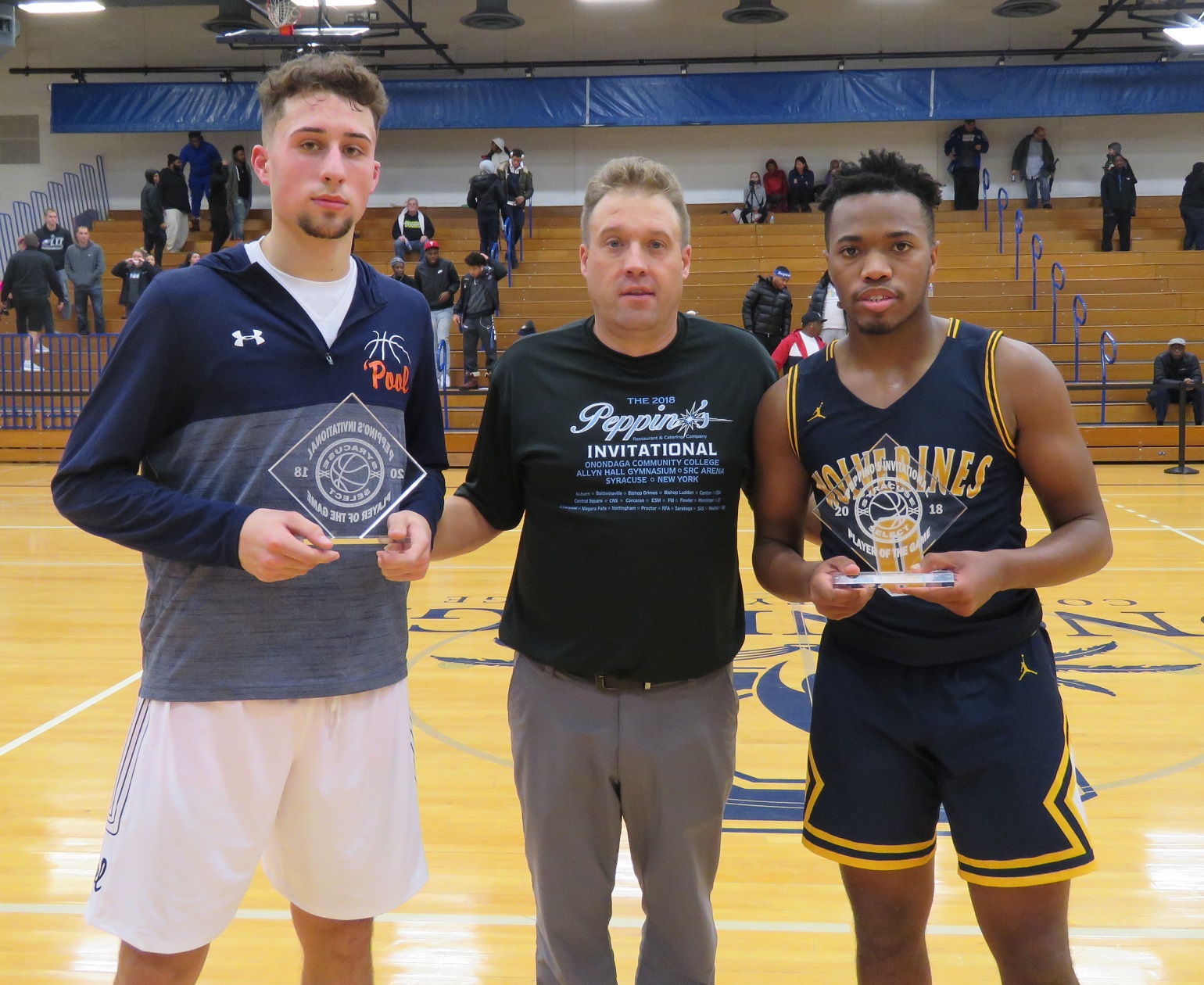 by yarger
Fri, Nov 30th 2018 10:35 pm
Bradberry, Harris lead Niagara Falls to statement victory
By David Yarger
Tribune Editor
Friday night, the Niagara Falls Wolverines began their 2018-19 basketball season like they always do: with tough competition.
The Wolverines faced the defending New York State Class AA champions Liverpool High School. After a slow start in the first quarter, the Wolverines never looked back and throttled the defending champs, 71-42, at Onondaga Community College.
Niagara Falls struggled in the first quarter, as the team trailed, 13-12. After the first quarter, though, the Wolverines onslaught began.
After swapping buckets to start the second quarter, Josiah Harris nailed a 3-pointer to begin a 20-1 run to end the period. Along with Harris, Jalen Bradberry scored his first 9 points in the quarter, including a 3-pointer to put the Wolverines up by 16, 32-16. The Wolverines took a 34-16 lead into the halftime break.
Of the second quarter breakout, Wolverines coach Sal Constantino said he believed his team just calmed down and were able to begin making plays.
"I think a couple shots started falling for guys," Constantino said. "There are newcomers with us and, not that we haven't played together, but you know in front of a crowd and everything, it took us a little longer to get comfortable than I thought it would. At the end of the day, I said, 'If we're gonna guard like that, we're gonna beat a lot of teams. Until the end there, we hold the defending state champions to under 40."
The shut down defense and consistent offense continued out of the halftime break, as the Wolverines defeated Liverpool, 23-9, in the third quarter. Bradberry added 7 more points in the quarter, and Harris drained one of his three 3-pointers in the quarter.
In the fourth quarter, the Wolverines were able to substitute guys in and out with the lead in good shape - up 30 after three quarters.
Liverpool won the final quarter, 15-14, but the Wolverines walked away the victors, 71-42.
Bradberry led the team with 16 points, while Harris was named player of the game for his all-around play and 11 points.
The game was Bradberry's first in a Wolverines jersey, as the sophomore transferred over from the recently closed Niagara Catholic. Constantino said it was nice to see him shake so opening jitters and make big shots.
"I think he's one of the guys that presses himself a little early. I think that once the first one went down ... the basket gets a little bigger when you start to feel good about your game. ... He's gonna score for us. We know 100 percent. I like the fact that he was really in our passing lanes and our press and he was really defending," he said.
On the senior Harris winning player of the game, Constantino said he is really the vocal motivator and leader to the team.
"When we walk out I don't give guys matchups, I tell Siah to match them up. ... He's that coach on the floor if that's what you want to call him," he said.
Additionally, for the Wolverines, Moran Montgomery and Taylor Sanders added 8 and 10 points, respectively. All game, the duo was getting second chance rebounds and making tough, contested buckets.
"Some people would say the basketball term is garbage men. I wouldn't say that about them, because they have skill levels. They can make plays out there. I think the one thing we did was we finished around the basket with contact, which was really good to see. It builds confidence with them, as far as their teammates. ... Those two guys are athletes. When they run the floor, we're pretty good," Constantino said.
Also, offensively for the Wolverines, Jaemon Turner, Naim Bradley, Joe Palka and Willie Lightfoot added 8, 7, 6 and 5 points, respectively.
Constantino is used to scheduling tough competition to start the season off, but to get a win against the defending state champs to begin the season - he was proud.
"It's why we're here," Constantino spoke of the two-day showcase at Onondaga Community College. "We're coming down and we knew we were going to get two really good games. We knew it was going to be kind of a hostile environment. We had a few fans here, but, obviously, most of the gym will be the two Syracuse teams."
The Wolverines will have little time to rest, as they're back in action Saturday versus Henninger High School. Henninger is another tough team out of Syracuse, and Constantino said the team's roster is full of height.
"We watched a little bit of them and, obviously, they're big. They're 6-foot-10, 6-foot-7, 6-foot-5. The whole starting lineup is over 6 feet tall. So, we'll be challenged there, but I want to see someone match our energy. We're going to be a task for them, too," Constantino said.
The Wolverines' battle versus Henninger starts at 4:15 p.m. tomorrow at Onondaga Community College.
Categories
School feature Sports feature