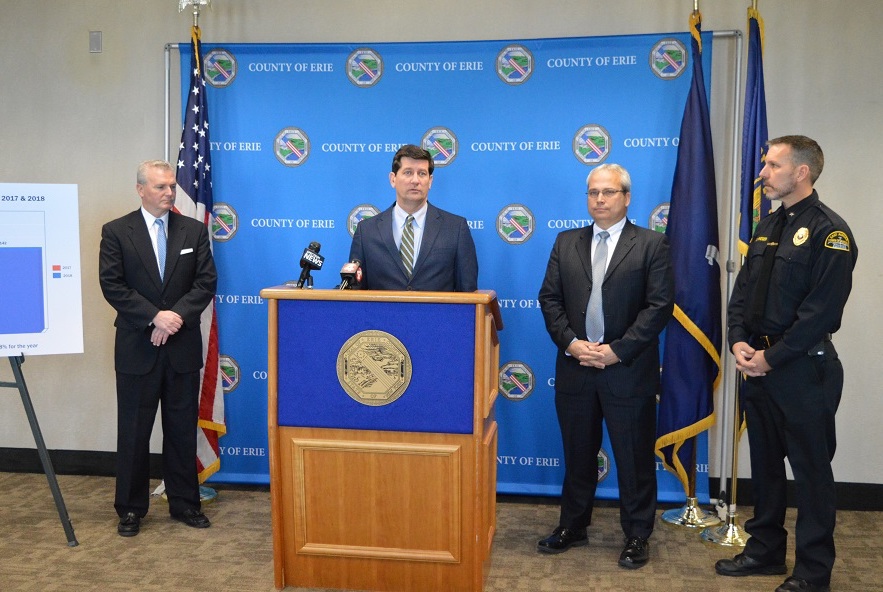 Erie County Executive Mark C. Poloncarz (at podium) provided an update on DWI arrests in Erie County in 2018 and to promote safe driving around the upcoming Thanksgiving holiday.

Mon, Nov 19th 2018 05:00 pm
November is STOP-DWI Month in NYS; county executive, commissioner review decline in DWI arrests in 2018
Erie County Executive Mark C. Poloncarz was joined by Commissioner of Central Police Services James Jancewicz, Director of the Erie County STOP-DWI Office John Sullivan, and President of the Erie County Chiefs of Police Association Shane Krieger today to provide an update on driving while intoxicated arrests in Erie County in 2018, and to promote safe driving around the upcoming Thanksgiving holiday and into the holiday season. DWI arrests are down nearly 10 percent in Erie County in 2018 year-to-date, with 232 fewer arrests as of today as compared to 2017. The decrease from 2,354 DWI arrests by Nov. 18, 2017 to 2,142 DWI arrests by Nov. 18, 2018, represents a decrease of 9.8 percent for the year-to-date.
"It is encouraging that DWI arrests have declined in Erie County since last year, but more work remains to be done. With Thanksgiving here and the holiday season close behind, it is imperative that people act responsibly on our roadways," Poloncarz said. "That responsibility especially applies to those who have had too much to drink and are in no condition to drive. Individuals who find themselves in such a situation should make alternative plans to get home, keeping themselves and everyone else on the road safer."
Jancewicz added, "The reduction in DWI arrests is good news and is evidence that motorists seem to be increasingly aware of the dangers drunk driving presents and the consequences it entails. We must be constantly vigilant and ready to prosecute those who fail to heed the message and engage in this destructive behavior."
November has been proclaimed as STOP-DWI Month in New York by Gov. Andrew Cuomo to recognize the most successful and longest-running self-sustaining impaired driving project in the country. There is a STOP-DWI office in every county in New York, and DWI fatalities statewide have been reduced over 70 percent since the STOP-DWI initiative began in 1982.
"The STOP-DWI message is being heard and the results over the past 36 years speak for themselves, but today we are putting the message out again in advance of the holidays," Sullivan said. "At this time of year, people need to be more aware of the penalties associated with DWI, the alternatives to driving under the influence of alcohol or drugs, and the need to make good decisions to ensure safety and happy holidays for all."
For more information on the Department of Central Police Services, visit http://www2.erie.gov/cps/; on the STOP-DWI office, visit http://www2.erie.gov/cps/index.php?q=stop-dwi.
Categories
Dispatch NFP