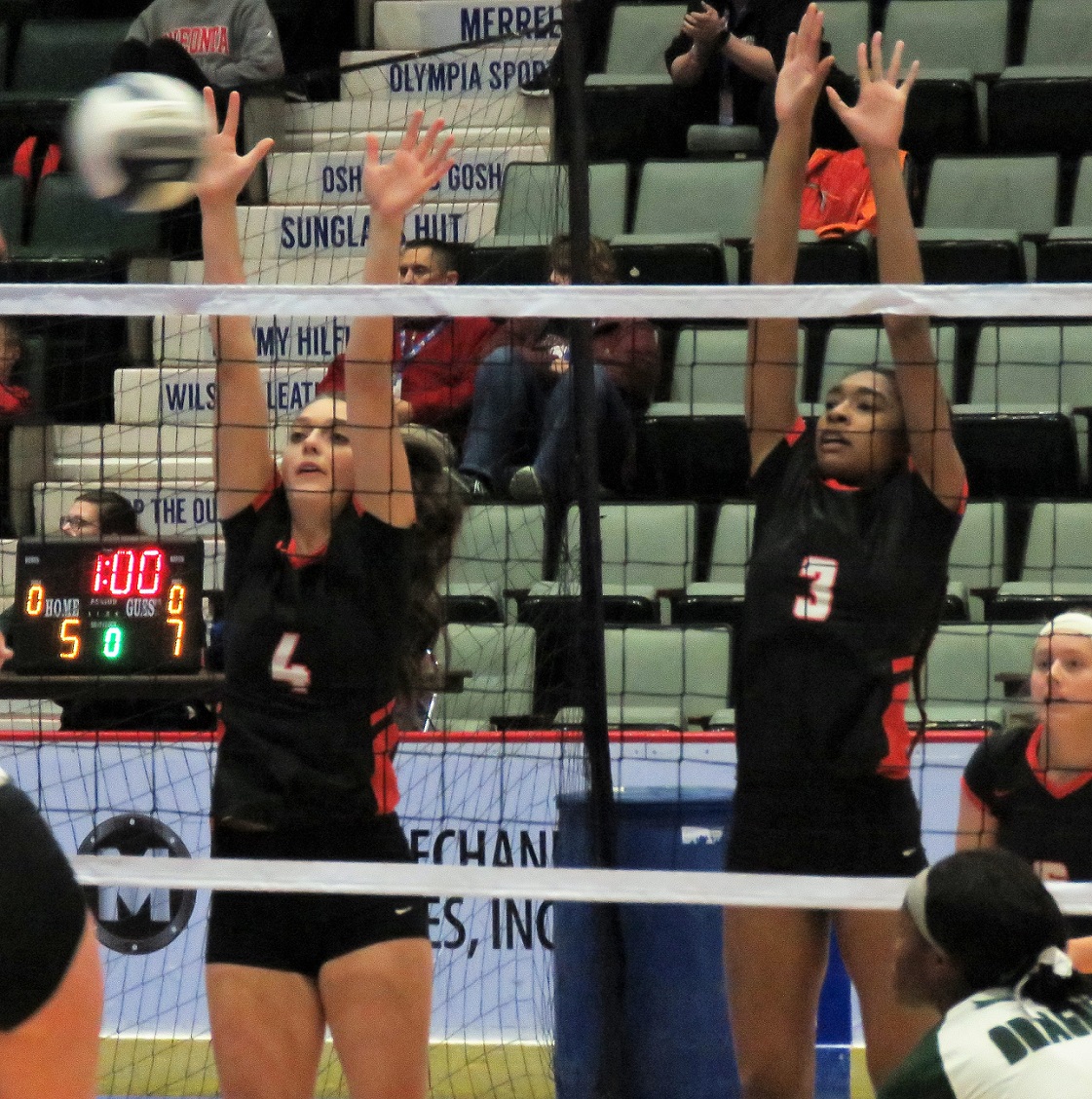 From left, Katelyn Kostiw and LeGary Jackson attempt to block a spike during the team's 2-0 sweep of Cornwall. (Photo by David Yarger)

by yarger
Sun, Nov 18th 2018 12:25 am
Niagara-Wheatfield finishes 3-3 in pool play; attempting to win first state title Sunday
By David Yarger
Tribune Editor
The Niagara-Wheatfield Falcons girls volleyball team etched another first into its season Saturday. The Niagara Frontier League and Section VI Class A champions will play for their first state title Sunday, after finishing second place in pool play of the New York State Class A girls volleyball championships.
The team finished 3-3, after defeating Cornwall High School, 2-0; tying 1-1 versus Burnt Hills High School; and losing 2-0 to Wantagh High School.
The team started its first state championship run in grand fashion, with a sweep over Cornwall. Kelsey Tylec notched the first state tournament point in the program's history, and the Falcons won the first set, 25-20.
In the second set, with a 9-8 lead, Jenna Sonnenberg served up four straight points to extend it to 13-8.
Late in the set, up 17-15, Emily Brochey served on five straight points, before Cornwall could get back on the board. The Falcons finished up the second set the victors 25-21.
The Falcons endured its first stumble at the tournament in its first set versus Burnt Hills. N-W came within one and two points of Burnt Hills several times during the set, but came up short, 25-22.
The second set was polar opposite. With a 5-4 lead, Danielle Brochey served up six straight points to extend the lead to 11-4. N-W led as much as 17-7, and eventually won, 25-17.
The team's biggest hiccup was versus Wantagh, but, regardless of the result, the Falcons had a state finals berth clinched before they stepped on the court.
The Falcons clinched a head-to-head tiebreaker after Cornwall, who started pool play 0-3, defeated Wantagh in its last set, then swept Burnt Hills to increase their record to 3-3 in pool play. The comeback gave Cornwall a chance to play in the finals, as Burnt Hills was eliminated with a pool play record of 2-4. If N-W would've swept Wantagh, it would've increased the Falcons' record to 5-1 and decreased Wantagh's record to 2-4. If the Wantagh and N-W split the series, Cornwall would have played Wantagh in a sudden death set.
With Cornwall backing and cheering Niagara-Wheatfield on the entire match, Wantagh won, 25-14 and 25-22, respectively.
Falcons coach Brandi Cochran said she didn't tell her team they had clinched prior to its match versus Wantagh, and it was seen, as N-W players were visibly upset after being swept by Wantagh - thinking their season could be over. The team's spirits were uplifted after Cochran told the team they'd be playing Sunday.
Looking back, the second set versus Burnt Hills, ended up being the "clincher" for the team. After losing the first set against the team, Cochran called the second-set win "huge."
"I told the girls, 'If you're not sweeping teams, you gotta try and split,' and obviously it's better to come out strong 2-0, and they did early today when we played Cornwall first. ... Starting off strong was huge," Cochran said.
In the 2-0 loss to Wantagh, Cochran said she learned a lot about the team and said the Falcons would work to be better in the finals.
"They are just fighters," she said. "They have a very solid offense, their defense was ridiculous. ... They have some nice hitters. ... Their blocks stepped up, too. I was not expecting the blocking that came from the other side and we gotta watch that tomorrow if we want to be successful."
The atmosphere was a bit different for the Falcons, as pool play (and the finals tomorrow) was played inside the Cool Insuring Arena at Glens Falls. While the Falcons played, there was always another match going on either on court three or two, creating a loud environment. Cochran admitted her girls were used to the atmosphere, as some of them have played in 50-court gyms before.
Nevertheless, Cochran was thrilled that her team will see the final day of the season.
"(It's) amazing," she said. "I had no idea what this level would be like, because I don't see the teams in the other varsity state. I didn't know if we would go 0-6, I had no clue. Coming in as our first ever in school history, I was very unsure. So the fact that we somehow squeezed in ... it's amazing and the girls are so excited."
As far as the match versus Wantagh for the title Sunday:
"I'm hoping that they're going to find inside themselves to just come out and play their best game ever, and if that means we get a state title, then awesome. If they play their best game and Wantagh is better, I'm still OK with it, as long they play (their) best," Cochran said.
Niagara-Wheatfield's best-of-five series versus Wantagh for a state championship starts at 2 p.m. tomorrow on court one at Cool Insuring Arena in Glens Falls.
Categories
NFP School feature Sports feature Tribune feature