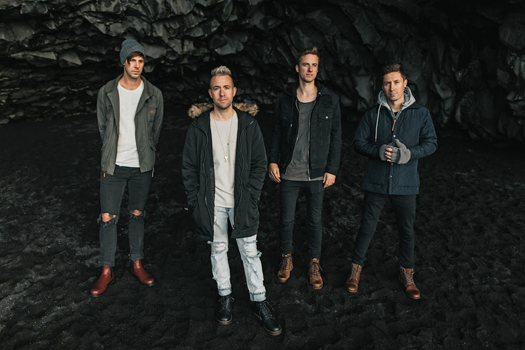 Fri, Nov 16th 2018 08:10 pm
Fair Trade Services' Hawk Nelson debuted a new music video for their song, "Parachute," on Freeccm.com in support of the upcoming single. The video was shot by the band's frontman, Jon Steingard, at the White Sands National Monument in New Mexico, and it was done entirely on an iPhone.
" 'Parachute' is one of my favorite songs we've ever done, because it deals with vulnerability," Steingard said. "I think sometimes as Christians we feel like we're supposed to have all the answers for everything. And we feel like everyone else has it figured out, while we don't. But the truth is that not one of us knows exactly what we're doing in this life, and that's why we need Jesus so much. I think this is one of the most important songs we've ever recorded, because it's honest about how we really feel and gets to the core of our need for Christ. I hope this song is an encouragement and a reminder that only he can bring us the salvation, and the hope and the peace that we need."
Hawk Nelson released their eighth studio album, "Miracles," in April. "Parachute" is the third single from the album set to impact Christian radio at the top of 2019. It follows current single "Never Let You Down," which recently gained momentum on the Billboard Hot AC/CHR chart; and their title track, "He Still Does (Miracles)," which hit the Top 10 on Billboard's Hot AC/CHR chart and the Top 15 on the AC chart in the spring with more than 75 stations on the song. These songs and others from the album have garnered more than 8 million streams across digital platforms.
About Hawk Nelson
Originally hailing from Canada, pop/rock band Hawk Nelson quickly became a fan favorite with their relatable lyrics and infectious hooks. Since their 2004 debut, the group - comprised of Steingard (lead vocals, guitar), Daniel Biro (bass), Micah Kuiper (guitar) and David Niacaris (drums) - has released eight full-length projects, including 2015's critically acclaimed "Diamonds," which produced the band's first No. 1 Billboard AC Indicator single, "Drops In The Ocean," when it spent an impressive nine weeks at the top of the charts. Hawk Nelson's music has garnered numerous high-profile film and TV placements on "American Idol," the Olympics and the trailer for 2017's blockbuster "Jumanji," among others. In addition, the band has earned two Canadian GMA Awards and received multiple GMA Dove Award nominations, as well as a JUNO nod.
Categories
Entertainment On Stage feature