'Noel at Niagara' returning to Town of Niagara

by yarger
Thu, Nov 15th 2018 11:05 am
Holiday-themed event lights park for winter
By David Yarger
Tribune Editor
On Tuesday afternoon, Town of Niagara Supervisor Lee Wallace announced that "Noel at Niagara" will make its return to Veterans Memorial Community Park for the upcoming holiday season.
The festivity, which lights up the park using holiday-themed displays, will debut from 5-7 p.m. on Nov. 23. The ceremony will include refreshments, the Bob Volkman Band, a visit from Santa Claus and a fireworks display.
Wallace also announced that the town, in conjunction with its business and professional association and the Fashion Outlets, had acquired lighted displays from the United Way, which were used in the organization's "Holiday Lights Trail."
Wallace hoped the undertaking would be the start to an expansion of "Noel at Niagara" throughout the town. Wallace listed the Fashion Outlets, Town Hall, Niagara Active Hose Fire Co. and central locations along Military Road as possible sites the town hopes to expand the event to.
In a release, Wallace said, "It was a win-win for the Town of Niagara to purchase lights from the United Way and utilize them in our annual 'Noel at Niagara' event at Veterans Memorial Community Park. We purchased the light displays for $25,000, which helps the tremendous work done by the United Way, and in return, we acquired professional displays that will greatly enhance the town's park and other areas in the Town of Niagara."
Jerry Wolfgang was in attendance on behalf of the United Way. Wolfgang said it's great to see the light standards find a home in the Town of Niagara.
"We're very happy that an agreement could be reached," Wolfgang said. "United Way is very happy that they are here. ... They've found a great place, a great home."
Assemblyman Angelo Morinello was also in attendance for the announcement. Morinello praised the town and the park for how it's grown over time.
"The Town of Niagara has created a center-of-the-universe for the town," Morinello said. "There is much that happens at Veterans Park. It is one of the most progressive and beautiful parks in Western New York, and it just keeps growing. This Christmas display is going to put it on the map. ... The Town of Niagara should be very proud."
Wallace gave praise right back to Morinello and said, "Assemblyman Morinello has been a big supporter of ours and been right behind us in everything we've done."
Chris Woods of the Town of Niagara Business and Professional Association also spoke, along with Meghan Ayers of the Fashion Outlets, to state their pleasure of being involved with the holiday festivity.
"We're very happy to be able to volunteer and help at 'Noel at Niagara' this year," Woods said. "Being able to work with the town to help promote businesses in the town, as well as, obviously, all (the) great events in the town, such as 'Music Mania Mondays,' that is a great honor and we're just happy to be here and help out."
Ayers, who is also a member of the TNBPA, said, "We are thrilled to participate with the town in this adventure. ... I'm doubly pleased to be apart of this with the Town of Niagara."
Wallace finished by talking about last year's first "Noel at Niagara" event, which proved to be a success.
"I really had no idea what to expect. ... I was shocked. We must've had over 500 people the first night. It's a big event and a lot of people like Christmas, and we're gonna make the Town of Niagara, eventually, a place to be and a spot on the map for people to visit," Wallace said.
The light displays of "Noel at Niagara" will be illuminated each night from 5-9 p.m. featuring holiday music in Veterans Memorial Community Park, 7000 Lockport Road, running until Sunday, Jan. 6.
In addition to "Noel at Niagara," children and families can visit the North Pole workshop at the Calvin K. Richards Senior/Youth Center inside the park from 6-8:30 p.m. on Dec. 1,8 and 15. Kids will get the chance to see Santa Claus and enjoy numerous holiday activities.
For a complete schedule, visit www.townofniagararecreation.com. 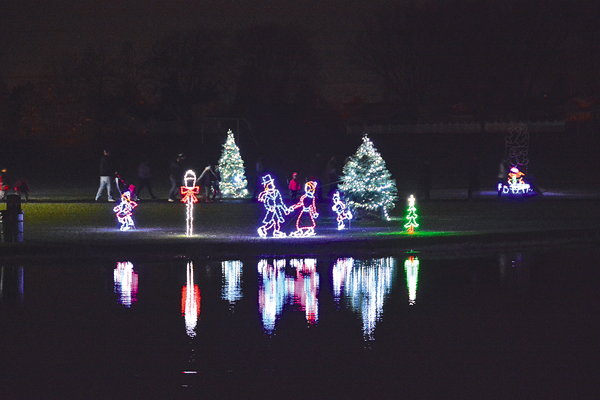