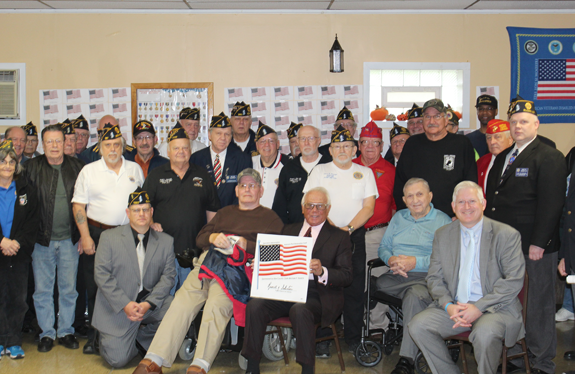 Fri, Nov 2nd 2018 04:10 pm
Philanthropist receives first 'milestone flag' from veterans
The Veteran Post Restoration of Erie County, NY Inc. presented Russell J. Salvatore with its first "milestone flag," signifying the first $10,000 raised to improve and modernize local veteran posts.
In order to show their gratitude toward the community, the veterans present a "milestone flag" to an individual who has been exceptionally supportive of veterans. Salvatore surprised the entire room of veterans at the Frank L. Gierlach American Legion Post 1320 when he announced he will donate what is needed to make the post completely handicap-accessible to its members and guests.
Salvatore was selected to receive the first "Milestone Flag" for all he has done for veterans in WNY. His generous efforts include building the Heroes & Patriots Park in front of his restaurant on Transit Road, and providing a fleet of vehicles for the VA Hospital to transport veterans - in addition to many other acts of kindness and donations that he has made to veterans organizations over the years.
The Veterans Post Restoration of Erie County, NY is a not-for-profit comprised of American Legion, AMVETS, 40&8, Marine Corps League and VFW posts around Erie County who are working collaboratively to address their shared needs. Its goal is to repair and upgrade these posts in order to pass them down to the next generation of veterans.
However, some of the aging veterans who are in wheelchairs or are disabled from loss of limbs are limited by the lack of handicapped-accessibility accommodations at the posts.
The veterans have been fundraising money with a fundraiser selling paper flags for $1 each at the Erie County auto bureaus. The posts set a preliminary goal of $100,000 in order to begin completion of a couple immediate projects. They successfully reached their first milestone of $10,000, which will allow them to complete their first project.
Through the generosity of Salvatore, they can now complete the second project.
The Veterans Post Restoration Organization announced it will direct the first $10,000 toward replacing the antiquated electrical system inside the F.J. Donovan American Legion Post 1626 in Cheektowaga. In honor of reaching this amount, the veterans presented Salvatore with its first commemorative "milestone flag," which Salvatore signed and says he proudly supports veterans.
During the program, details of the second program were announced and fundraising for it officially began. The project includes handicapped-accessible bathrooms and additions inside the Frank L. Gierlach American Legion Post 1320 in Sloan. Upon hearing the plan, Salvatore surprised the veterans with his offer to complete the project for them.
Gary Oakes from the Frank L. Gierlach American Legion Post 1320 explained the need for handicapped-accessibility at the post: "The Frank L. Gierlach American Legion Post 1320 was built in the 1970s by its members." During the era in which it was constructed, there were not the same regulations as there are today for accessibility in public buildings.
Currently, a majority of Post 1320's members are older and unable to repair or renovate the post. As much as they would like to take on this undertaking themselves, many are physically unable. For these members, it is difficult or impossible to use the restrooms at the post. As a result, they cannot stay long for activities and functions, or cannot come at all. By making the restrooms accessible, the post will be able to accommodate current members and also attract new one who have limitations due to injuries.
Jerry Kowalski, from the F.J. Donovan Post 1626, called for the color guard and led the pledge of allegiance. Fifth-graders from Woodrow Wilson Elementary came to show their support and encouragement to veterans as they sang "God Bless America."
Erie County Clerk Michael Kearns has been a proud supporter of this veteran group since his time in the Assembly. He said, "We are deeply appreciative of the efforts of Mr. Russell J. Salvatore, for his generous help and support of our aging veterans in WNY and the new generations of veterans to come, whom have served and sacrificed for the freedom of our country."
Categories
Home feature NFP