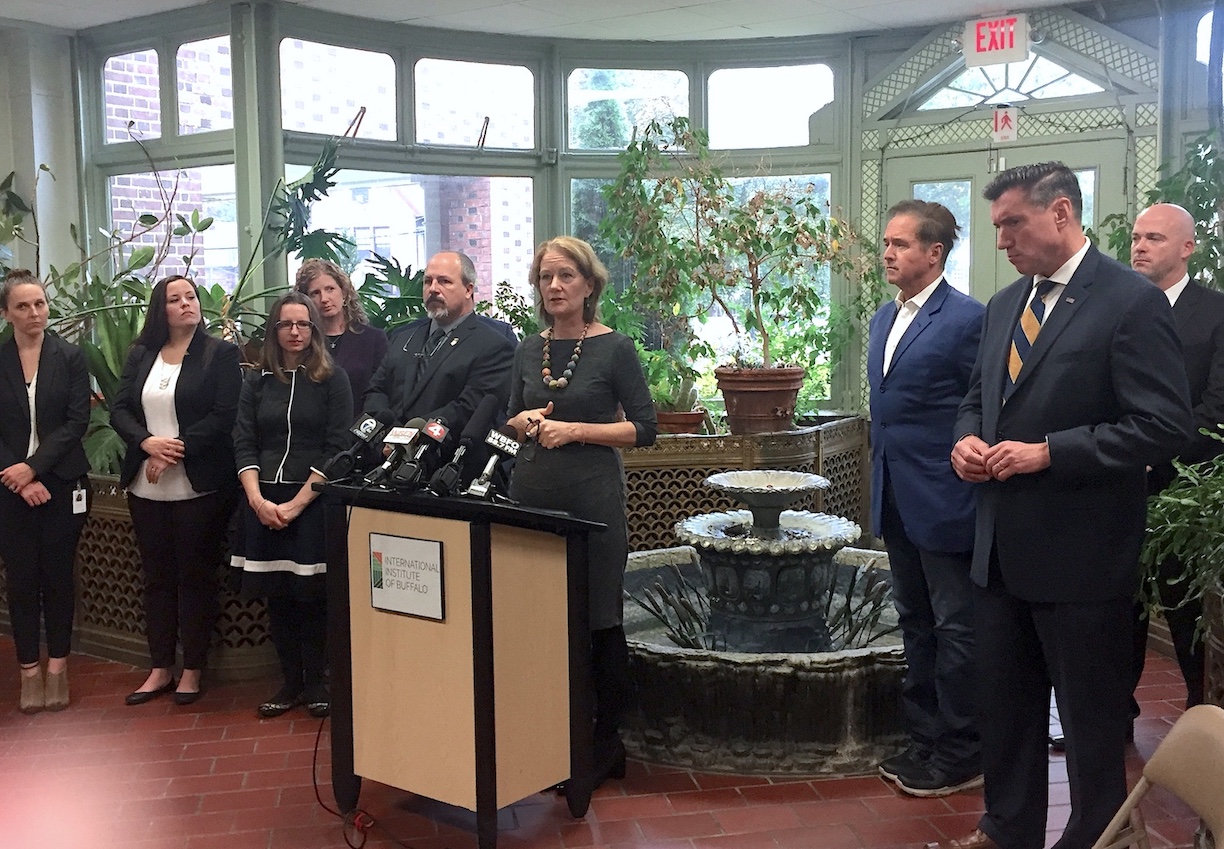 Thu, Nov 1st 2018 04:30 pm
Federal grants awarded to international institute & human trafficking task force
Congressman Brian Higgins announced the International Institute of Buffalo (IIB) has been awarded two federal grants through the Justice Office for Victims of Crime (OVW). The two grants, in the amounts of $700,000 and $750,000 for a total of $1.45 million, will help the Institute continue to provide specialized services for victims of human trafficking.
The first grant, from the DOJ's enhanced collaborative model task force to combat human trafficking program, supports the collaborative, multidisciplinary work within the western district of New York Human Trafficking Task Force and Alliance. HTTFA is one of the most experienced, longest-funded task forces in the country. It has been co-led by the Erie County Sheriff's Office and IIB since its inception in 2006. The two organizations will share $1.5M in funding over the next three years. The partnership works collaboratively to identify victims of sex and labor trafficking, investigate and prosecute human trafficking, and help survivors get the support and assistance they need. The funds from the award will go to helping the HTTFA continue combatting human trafficking throughout Western New York, while expanding its efforts to include a new Erie County specific task force housed within the Erie County DA's office.
Chief Daniel Granville of the ECSO said, "More than nearly any other crime our community faces, human trafficking requires an experienced, collaborative and multidisciplinary response. As a grant recipient along with the institute since 2006, we are grateful to DOJ to continue and expand our work."
Erie County District Attorney John Flynn said, "My office is committed to prosecuting all forms of human trafficking in Erie County. A collaborative effort with our partners in law enforcement is essential to uncovering these abuses, helping the victims and prosecuting the offenders. I commend the DOJ for their continued support as we work to bring an end to human trafficking."
The second grant, titled specialized services for victims of human trafficking, will allow the IIB to expand its housing first pilot program for survivors of human trafficking. It will also provide mental health and substance use services by working in collaboration with community-based health organization Evergreen Health Services.
The institute and its partners have worked with nearly 1,400 survivors of human trafficking since the inception of its service program in 2006. Survivors have escaped and recovered from homes where they were kept as domestic servants, farms, retail stores, street and hotel-based sex work, restaurants, dance clubs, state fairgrounds, factories and hotel/motel work.
Eva Hassett, executive director of the institute, said, "As one of the most experienced service providers in the country, the institute is thrilled to continue and expand its innovative work with all survivors of human trafficking in Western New York. These funds will not only allow local survivors additional resources as they work toward safety and healing, but will also establish best practices that can be shared nationally to improve work with survivors throughout the country."
Higgins said, "The challenges of an issue as serious as human trafficking require a multilateral approach in order to effectively prevent it, prosecute it, and provide assistance to its victims. These DOJ grants will be critical to the international institute and its local, state and federal partners in fighting against human trafficking in Western New York and aiding its survivors."
Categories
Home feature NFP