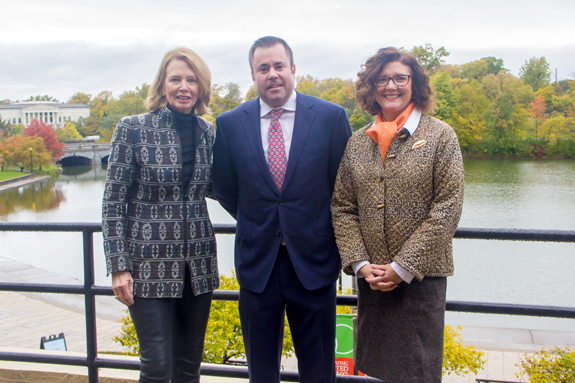 Mon, Oct 29th 2018 03:10 pm
100th birthday of late Ralph C. Wilson Jr. commemorated with paver at historic Hoyt Lake
The Buffalo Olmsted Parks Conservancy, joined by the Siegel family, unveiled and presented a commemorative paver to Mary Wilson in honor of her late husband Ralph C. Wilson Jr., who would have been 100 years old this month.
The landing, which officially opened this June, was conceived by Herb Siegel, a well-respected local attorney, philanthropist and founder of the Herb and Aaron Siegel Foundation. Herb's support of the Western New York community and the Olmsted Parks Conservancy has spanned decades.
"As we neared the second installation, my father and I thought about who epitomized the legacy we hope the Siegel Landing will leave on Buffalo, and Ralph Wilson immediately came to mind," Aaron Siegel of the Herb & Aaron Siegel Foundation said Monday. "It is only fitting that Mr. Wilson is honored today in this special place where Buffalonians come to celebrate special times in their lives and pay tribute to loved ones, friends and family. We are especially honored that Mrs. Wilson was able to be here with us today for the unveiling. On behalf of my family and my fellow Buffalo Olmsted Parks Conservancy board members, we thank you."
A press release stated, "The restorative landscape project at Hoyt Lake is a testament of the philanthropic legacy of Herb Siegel, which includes an endowment for ongoing maintenance. The Siegel's gift demonstrates the exact kind of fundraising support the conservancy needs for park projects."
Wilson said, "Looking out onto Hoyt Lake today I can't help but think about how much Ralph would have loved being here. I know he would absolutely love to sit on these benches, enjoying one of Buffalo's iconic sites.
"I would like to thank the Siegel family for honoring Ralph with this paver, noting his commitment to Buffalo and the Buffalo Olmsted Parks Conservancy for their efforts on this beautiful day."
The significance of the Siegel Landing marks the historic bandstand and boat launch for Gala Water, making the restoration of the Siegel Landing a positive step in preserving Buffalo's Olmsted Parks.
Located at the western shore of Hoyt Lake in Delaware Park, pavers are available for purchase and personal inscription. A third installation is scheduled for June 2019.
"The Olmsted Park System is honored today as we gather together to unveil our second installation at the Siegel Landing," said Stephanie Crockatt, executive director of the Buffalo Olmsted Parks Conservancy. "We are so fortunate to have an opportunity to recognize the amazing legacies which shape the greatness of our city: From Olmsted to Herb Siegel, and to Ralph C. Wilson Jr., it is in these moments as we celebrate 150 years of our historic parks, where we now look to the future and the generations who will benefit from these legacy landscapes."
Full details on The Siegel Landing can be found at www.bfloparks.org/buyapaver.
About Buffalo Olmsted Parks Conservancy:
The Buffalo Olmsted Parks Conservancy is the first nonprofit organization in the nation to manage and operate an entire urban park system. It consists of 850 acres of historic parks, parkways and circles. Celebrating its 150th anniversary in 2018, The Buffalo Olmsted Parks Conservancy is a not-for-profit, membership-based, community organization whose mission is to promote, preserve, restore, enhance and maintain the Frederick Law Olmsted-designed parks and parkways in the Greater Buffalo area for current and future generations.
More than 2.5 million people use Buffalo's historic, award-winning Olmsted Park system annually for recreation, relaxation and rejuvenation. America's first landscape architect, Frederick Law Olmsted, designed the parks more than 148 years ago. Basic maintenance of the parks has been greatly improved since the 2004 groundbreaking public-private agreement with the City of Buffalo and Erie County.
The Buffalo Olmsted Park System includes: six parks (Cazenovia Park in South Buffalo, Delaware Park in Delaware/Parkside District, Front Park at the Peace Bridge, Martin Luther King, Jr. Park at Fillmore Avenue, Riverside Park at Niagara and Tonawanda Street, and South Park at McKinley Parkway); seven parkways (Bidwell, Chapin, Lincoln, McKinley, Porter, Red Jacket and Richmond); and eight landscaped traffic circles (Agassiz, Colonial, Ferry, Gates, McClellan, McKinley, Soldiers and Symphony).
Visit www.bfloparks.org. 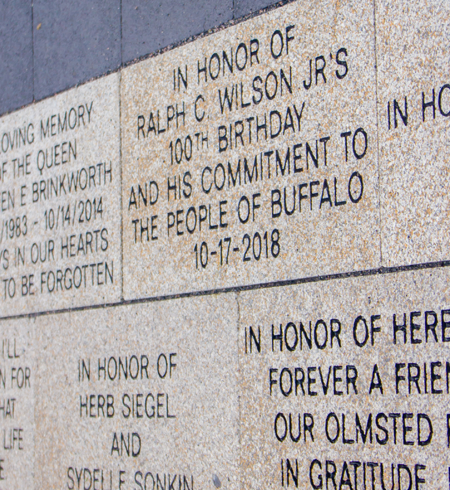