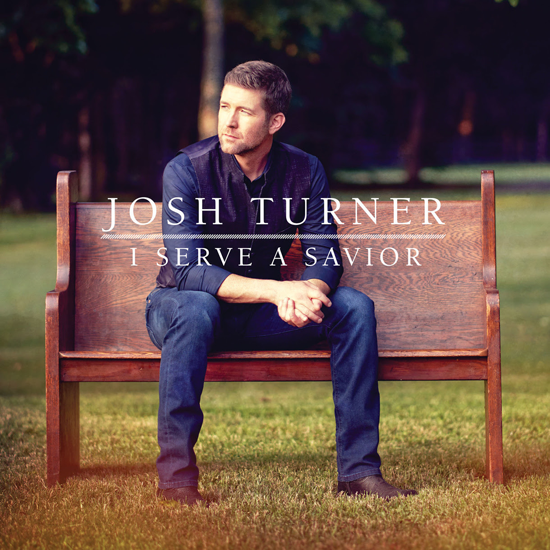 Josh Turner, "I Serve A Savior"

Fri, Oct 26th 2018 04:05 pm
Named one of the "most-anticipated country albums" this fall by USA Today, multi-Platinum-selling country singer Josh Turner's "I Serve A Savior" released today to critical acclaim, "bypassing the Saturday-evening revelry of most modern-day country," as stated by Rolling Stone.
The collection of handpicked hymns, alongside brand-new originals and live recordings of some of Turner's most memorable hits, "I Serve A Savior" "complements the singer's baritone voice. All the while, (Turner) manages to put his distinct spin on the classics" shared Sounds Like Nashville, adding " 'I Serve A Savior' provides a much needed message of hope to the listener ... and proves that (Turner's) gospel album was well worth the wait."
For "I Serve A Savior," Turner collaborated with Grammy Award-winning producer Kenny Greenberg. Greenberg called the album "a vocal tour de force" with a bluegrass flare: "This is where he comes from and who he is. This is what he grew up listening to and it became this labor of love."
Making "I Serve A Savior" was a dream come true for Turner, with his faith as the basis of the project, as he told The Tennessean in an upcoming Sunday cover story.
Additionally, the gospel project is one that fans have been asking to hear for years and "adds new meaning to the songs that have defined Turner's spirituality while allowing him to contribute his own voice," said Taste Of Country.
Bringing a new dimension to the singer's already acclaimed career, "Turner has outdone himself" with his latest faith-based endeavor according to Digital Journal, who called each track on the project "warm, inspirational and unique. It is evident that this studio effort was a labor of love for Turner."
In addition to the 12-track studio project, Turner has released a complementing 90-minute live performance DVD featuring a special interview of Turner with gospel legend Bill Gaither, and a performance with Turner alongside his wife, Jennifer, and their four sons. The DVD has been edited to air as a one-hour television special hosted by Gaither, which will air this week on numerous networks across the U.S. and Canada, and will continue to air throughout the fall. Click HERE for more information on networks and air times.
Talking with People.com, Turner discussed working with his family on the album, stating, "I wanted to have a moment on this record where I could feature (my kids) and my wife. It's kind of wild and I think it might be the beginning of something special because all four of my boys seem to have a strong musical talent. Whether or not they pursue that as a career, time will tell. I don't know what the Lord is calling them to do."
Check out "Josh's Gospel Greats" playlist HERE.
To purchase Turner's "I Serve A Savior," click HERE.
About Josh Turner
With his rich, deep voice and distinctive style, MCA Nashville recording artist Turner is one of country music's most recognizable hit-makers. From his 2003 Platinum-selling debut "Long Black Train" to his 2017 Billboard No. 1 release, "Deep South," Turner has scored multiple Grammy, CMA and ACM Awards nominations, and received six Inspirational Country Music Awards.
Turner has sold more than 8 million units, topped more than 1.5 billion in global streaming, and populated radio with such memorable hits as "Hometown Girl," "Would You Go With Me," "Your Man," "Time Is Love," "Why Don't We Just Dance" and "Long Black Train."
"I Serve A Savior" is a thoughtful gospel collection that finds Turner's rich, distinctive baritone paired with timeless classics including "Amazing Grace," "How Great Thou Art" and "Great Is Your Faithfulness," as well as introducing originals including the title track, "I Serve A Savior," and "The River (of Happiness)," written by his wife, Jennifer, and their eldest son, Hampton.
Turner is a disciple of traditional country music, a mentor to up-and-coming artists, and one of the youngest members of the Grand Ole Opry. Turner has been an Opry member for more than 10 years and he recently reveled in his 150th performance on the famed Opry circle.
The Hannah, South Carolina, native has been songwriting and performing since he was a child, and, in support of music education, he created The Josh Turner Scholarship Fund to assist students interested in pursuing a future in arts and music. As a high school student, Turner had very little access to music education, therefore he realizes first-hand the importance of arts education in schools.
For more information on Turner including a list of his upcoming tour dates, visit www.JoshTurner.com.
Get connected with Josh Turner:
Categories
Entertainment Entertainment feature