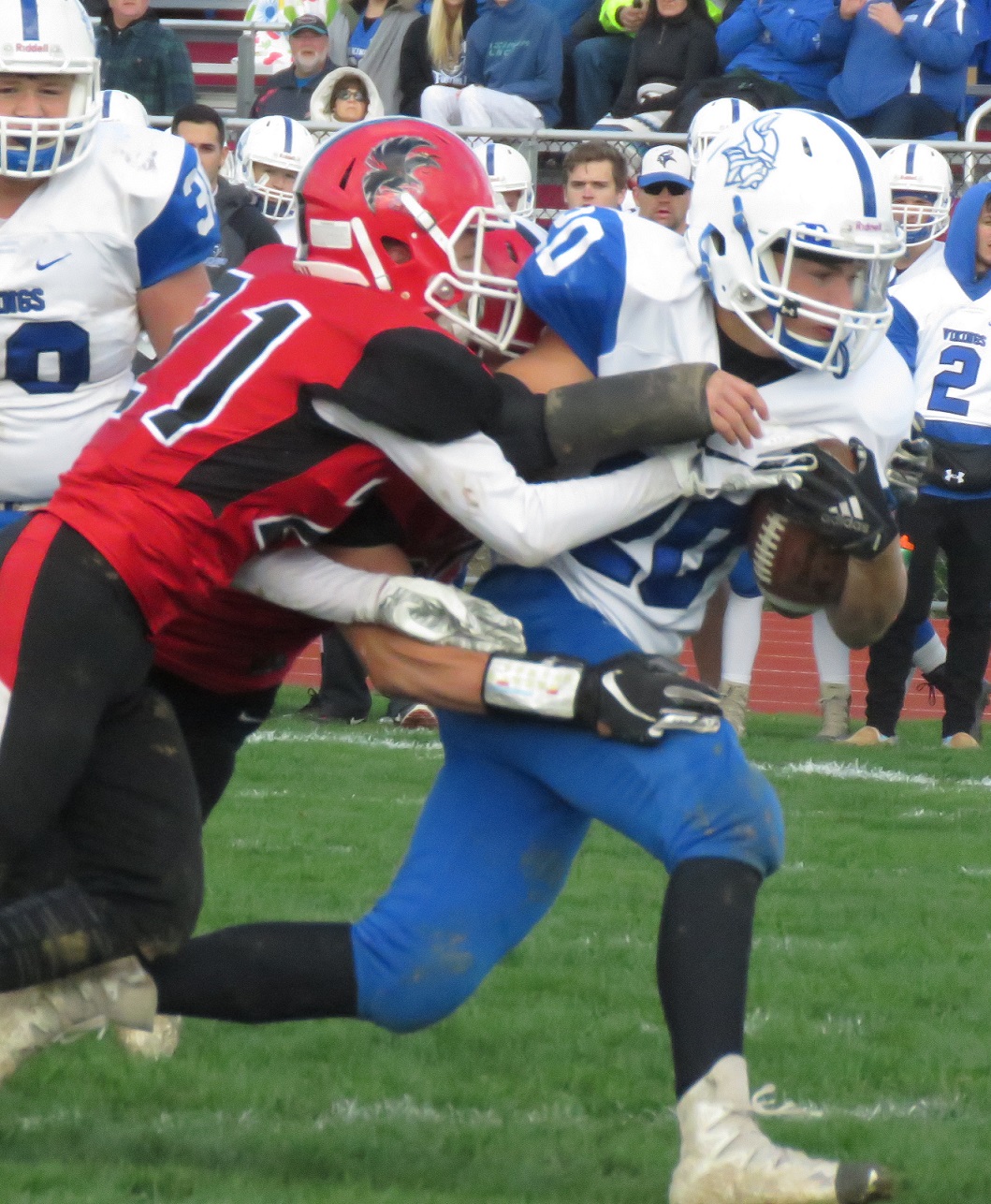 Grand Island's Ryan Jellinick is grabbed by Niagara-Wheatfield's Nick Stott. Jellinick rushed for a touchdown in the Vikings' 14-0 victory. (Photo by David Yarger)

by yarger
Sat, Oct 13th 2018 07:50 pm
Falcons D causes three turnovers, muster no points
By David Yarger
Tribune Editor
It was Niagara-Wheatfield's senior day at Terry Harvey Field Saturday afternoon. The celebrations did not finish how the Falcons would've liked, though, as the team dropped its final regular season game of the year versus Grand Island, 14-0.
Fans looking for offense showed up to the wrong game, as both teams put on clinics defensively.
On Grand Island's first possession, Cam Sionko's second pass of the day was tipped and intercepted by Josh Thibeault.
With the ball in the Falcons' offense's hands, the team got a big play on second down, as Chris Gordon III found Jordan Parks for 30 yards, but the play was negated due to holding. Any time the Falcons mustered a big play Saturday, there seemed to be a yellow penalty flag on the field to negate it.
Early in the second quarter, Grand Island was driving in N-W territory when a Sionko pass was intercepted by Parks. Parks mustered a big return into GI territory, but, once again, the return was called back due to a penalty on the Falcons.
The Vikings cracked the scoreboard late in the second quarter, as Blake Bielec ran it in from short yardage. The drive was highlighted by Sionko, who rebounded from a shaky start and went 3-4 with 33 yards to lead to the score.
Grand Island took a 7-0 lead into halftime.
The Vikings received to start the second half, but the team's drive ended early with a fumble recovery by Thibeault.
Whenever the Vikings offense made mistakes, though, the defense was always there to help them out, and the Falcons turned it over on downs off the turnover.
Fast forward midway through the fourth quarter, the Vikings used 10 plays to score its second touchdown of the day, this time Ryan Jellinick rushed it into the endzone from 13 yards out.
The Falcons best offensive possession came with under a minute to go, as Gordon completed four passes to push the Falcons close to its first score, but time ran out on N-W. Grand Island walked away victorious, 14-0.
Defensively, the Vikings held the Falcons to -8 rushing yards. GI coach Dean Santorio praised his defense for their showing, especially on a day where his offense struggled.
"Defensively, can't say enough good things about what we did ... I thought our kids, defensively, played fantastic today," Santorio said.
After turning the ball over twice early in the game, Santorio was pleased his team was able to stop the Falcons from scoring and bounce back to score points before the end of the first half.
"The two turnovers hurt us if they get in early after one of those," Santorio said. "We could've been in trouble ... but, again, our defense - those couple series' in a row after we turned it over - played great and I think held them without a first down those first two times and we get the ball right back.
"Just glad we got in before the half to at least feel good about putting a score on the board. And I was glad to see us play so tough in the fourth quarter then get another one to kind of put the game away."
Santorio also credited the Falcons and said the team is playoff caliber. Santorio added that N-W gave the Vikings a nice test before the playoffs.
"I think Wheatfield has a very good football team. ... They are probably in the playoffs if they score one more touchdown against somebody this year. So, they're a playoff caliber team that we knew would play us tough," Santorio said.
For the Falcons, it's the second consecutive week the offense has been shutout. Also, the past two weeks, the Falcons have rushed for -11 yards. Falcons coach Russ Nixon admitted it was tough to see his defense play the type of game they did and not be able to back them up with points.
"It's frustrating," Nixon said. "We talked about we have to keep that workman-like attitude that we're just gonna keep working and working, keep grinding. ... The last two weeks we played the No. 1 team in (Class) A and the No. 2 team in A. I think we bounced back defensively today, for sure.
Nixon also credited the Vikings and said they have a fast defense that made it tough for the Falcons to reach the edges on runs.
In the end, the game had no playoff implications, as Grand Island already clinched its spot and the Falcons were eliminated due to tiebreakers, last weekend.
Although the Falcons defeated Kenmore West, the Blue Devils received the last playoff spot. N-W, West and Jamestown all had the same record at the end of last week. According to the tiebreaker rules (since N-W beat West and lost to Jamestown, and West beat Jamestown), the West earned the last spot due to point differential between the two games versus N-W and Jamestown. In the games, the Blue Devils had a point differential of +6, compared to Jamestown's -1 and Niagara-Wheatfield's -5.
Nixon was disappointed by the ruling, but said, "The system is what it is, and I think we came out here and we showed that we could play with these teams that are in the top of Class A."
Defensively for the Falcons, Thibeault led the way with five tackles, an interception and a fumble recovery. Noah Mixon and Jake DeWolf also added seven tackles.
The Falcons will play another home game at 11 a.m. next Saturday versus Williamsville South.
Categories
Dispatch feature NFP School feature Sports feature Tribune feature