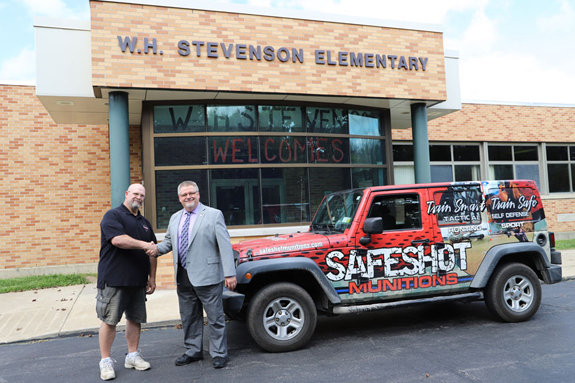 SafeShot Munitions to take over Stevenson Elementary in Ransomville

Sat, Sep 29th 2018 07:00 am
In 2013, the Wilson Central School District closed the doors to W.H. Stevenson Elementary School in Ransomville, because the district could not justify keeping the school open. Wilson CSD Superintendent Tim Carter commented at the time, "We don't have the student population or the money and resources to keep it running as a school. It's a huge piece of property and the Town of Porter had been having conversations about this building and how beautiful it was and what it could be used for. We wanted someone to do something with it, but somebody who would honor what has already been done here with the community."
Since then, the Wilson district had been maintaining the property to use for community recreational programs and BOCES workforce development training, but was hoping to find someone to lease or buy the property.
Enter SafeShot Munitions LLC of Ransomville.
It was reported this week that Stephen Cliffe (general manager) and Dr. Jon Hykawy (president) reached an agreement to lease the building from the Wilson CSD with an option to buy.
Town of Porter Supervisor Duffy Johnston brought it to Cliffe's attention. As a resident of Ransomville, Johnston saw the potential as a site for their business.
"We thought this would be an ideal building to use for law enforcement training," Cliffe said. "We deal with specifically nonlethal training ammunitions, things that are safe to use in very close distances. We want to assure the community that there will never be live ammunition on the property.
"We are trying to turn it into a full first-response training center. That will allow all the local law enforcement groups to train locally instead of traveling all the way to Oriskany or out of state. It will help them save on their expenditures."
Cliffe said he has a company known as Imminent Threat Defense Systems LLC that also will operate in this space. "We have been running the TeachSafe active shooter response for classroom defense training program since 2006. We bring educators in the training mix and (get) them educated in how to respond to a situation."
Cliffe added he hopes to partner with teaching colleges to offer the training to students.
"There will be 7,000 educators graduating from Western New York teaching colleges this year," he said. "If we can put them through our facility for training, we can bring in state and federal monies involved in safe school initiatives to assist the local schools and the economy. If we graduate them with that training, they are that much more employable."
Cliffe said, "We have developed curriculum for emergency response for EMTs and also how to do extractions of casualties in inactive shooter/mass casualty incidents known as 'warm zones.'
"We want to turn it into a full first-responders training center. Everyone will be welcome. We are hoping to get a lot of support from the community, because we know the school has been an intimate part of Ransomville for a long time. I think it is going to be very positive for the community, because it will be bringing a lot of business in to the area and a lot of opportunities for part-time work."
Carter said it has been a long road between the two to get a deal in place. "It started at the end of the last school year with a lot of conversations with a group of community members of what to do with the building. When Mr. Cliffe and Dr. Hykawy came in, we were having bigger and better conversations for the use of this building with law enforcement training.
"As a district, we wanted this building to be useable and also to have the town itself be able to use it as much as possible. I think the Board of Education, administration and the teachers are happy to see the building being used. We want to see the community using it, as well, around SafeShot's business schedule. I think it is going to be a great collaboration moving forward."
Cliffe said, "The support from Wilson School District has been fantastic in pushing things forward and getting stuff done. Without them, this would not have happened. They put their nose to the grindstone and got it done. It's a project and a half. We are hoping, as we go forward, it will turn into bigger and better things. We are looking to be up and running by mid-October."
Carter noted, "No one wants them to be more successful than I do. I hope it is an unbelievable asset for them. We need to have this building being used as much as possible. It has really been great to see the community using it, and he wants to keep the community as involved as possible. I think it is a win-win for everyone."
Report submitted by Lisa Bielmeier, public relations director, Orleans/Niagara BOCES.
Categories
Sentinel Sentinel feature Sentinel HP Feature List Top News Features
comments powered by Disqus