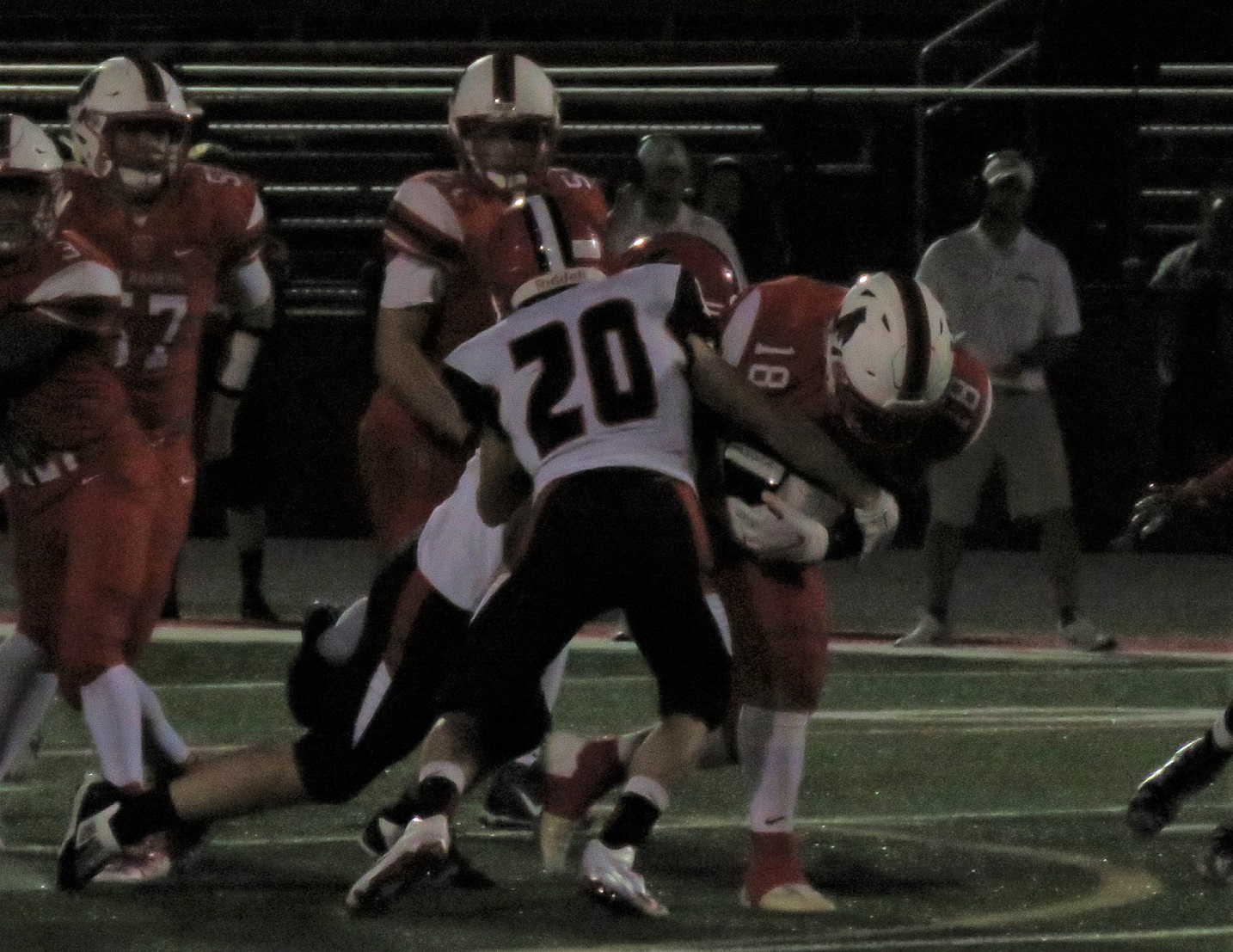 Niagara-Wheatfield's Jake DeWolf and Josh Thibeault assist each other bringing down the Jamestown ball carrier. (Photo by David Yarger)

by yarger
Sat, Sep 22nd 2018 12:55 am
Falcons turn ball over 7 times in defeat
By David Yarger
Tribune Editor
After a 3-0 start to the season, the Niagara-Wheatfield Falcons football team was finally handed its first loss from Jamestown, Friday night. The Red Raiders defeated the Falcons, 26-14.
Turnovers were a killer for the Falcons, as the team fumbled three times and threw four interceptions on offense.
Defensively, the Falcons started off slow, but came back and gave up just seven points in the second half.
The first three offensive possessions for the Falcons all resulted in turnovers.
After a fumble on the first possession, Jamestown took over and went 53 yards on six plays for a score. Following the failed extra point, the score was 6-0, Jamestown.
On the first play of the next offensive drive, Jordan Parks' pass was intercepted and returned for a Red Raiders touchdown, making the score 13-0.
The Falcons gained a little momentum offensively on its next possession, but a pass from Parks went off the hands of Noah Mixon and into the hands of Jamestown.
Scoring was held in check until late in the second quarter when Jamestown embarked on a 17-play drive, capping it off with another touchdown run, making it 19-0, Jamestown. The Red Raiders took that lead into halftime.
Out of the half, the N-W offense began to gain a little steam. After a three-and-out defensively, the Falcons went 72 yards, capped off by a 4-yard touchdown run by Nick Stott. Stott also caught a pass from Parks on the drive for 36 yards.
Momentum seemed to turn when the Falcons recovered a Jamestown fumble on the next possession, but, once again, the turnover bug bit N-W again. A fumble derailed a chance to make it a one possession game.
The Falcons had several chances to get the score closer, but just couldn't keep control of the ball. Jamestown capitalized on another fumble in the fourth quarter, which was inside the Falcons 20-yard-line, making the score 26-7, Jamestown.
After Austin Leber recovered a Jamestown fumble, Chris Gordon III found Tommy Peltier in the end zone for a 21-yard passing touchdown, making the score 26-14, Jamestown.
The game finished pretty chippy, with personal fouls handed out in both directions, but in the end, the Red Raiders walked away victorious.
On a tough offensive night, Parks finished with 84 yards on 12 carries. It was the first game Parks didn't find all the end zone. Bryson Solomon and Stott also added 57 and 51 yards rushing, respectively.
Defensively, Jake DeWolf led the way with 13 tackles and a fumble recovery. Kevin Cannon also added his fourth fumble recovery of the season.
Falcons coach Russ Nixon said it was a tough day for the team all-around. On top of a bus ride over and hour and 30 minutes, the game didn't kick off till 7:40 p.m. because of weather - an hour and 40 minutes past the scheduled start time.
"It's tough traveling (almost) two hours south," Nixon said. "It's difficult when you get delayed 90 minutes, but at the end of the day you gotta show up and play. You gotta be ready to go and I put a lot of this on my shoulders that we gotta be better prepared for the circumstances we're gonna encounter on gameday."
Nixon added that both teams had to play under the same circumstances, so there was no excuse. He also said the team needed to get off to a quick start, and that didn't happen until the second half.
The key theme was turnovers and Nixon said you won't win may games putting the ball on the turf seven times.
"Today a couple deflected passes and a couple good plays by Jamestown. They were able to capitalize and that was a big key to the game," he said.
Next week, the Falcons will play under the lights for homecoming versus Kenmore West. The Blue Devils defeated Jamestown in week three. Nixon said, with the loss, homecoming just got a lot more important.
"We know every week's important," he said. "It's a tough division. We're in the biggest division in A. There's no easy games, there's no easy teams. We know that all of these teams stack up pretty evenly together."
The first Friday night lights home game of the year starts at 7 p.m.
Categories
NFP School Sports Tribune feature