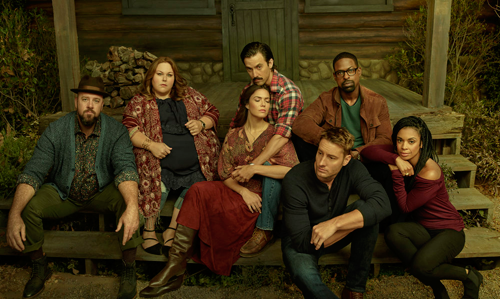 Wed, Sep 12th 2018 02:00 pm
For first time in 16 years, NBC wins season as #1 most-watched network, also securing 5th straight win in key demo
While NBC was expected to win the 18-49 demo crown for the fifth consecutive 52-week season, for the first time in 16 years the Peacock has also won the overall total-viewer race to become the most watched network in America.
The network is currently generating a 38 percent margin of victory in 18-49 with a 1.8 rating vs. a 1.3 for ABC and CBS in second place (FOX is at 1.2), the biggest percentage advantage at this point in the season for any network in the 31-year history of Nielsen's people-meter sample. (Based on "most current" averages from Nielsen Media Research through 50 completed weeks of the season.) The 52-week season ends on Sunday, Sept. 23.
For the September to September season, NBC not only ranks No. 1 in 18-49 viewers counting all programs, it also wins counting entertainment programming only, as well as scripted programs only and alternative programs only; and is also No. 1 in alternative programs in total viewers.
"I'm extremely pleased that NBC has prevailed once again in 18-49 and all demos, but we're obviously thrilled to become America's most-watched network in total viewers for the first time in 16 years," said NBC Entertainment Chairman Robert Greenblatt. "I'm so proud of our incomparable teams and all our division leaders — especially chief programmers Paul Telegdy, Tracey Pakosta, Lisa Katz, Pearlena Igbokwe and Meredith Ahr — whose consistent hard work, strategic thinking and relentless drive have pushed the network to this dominant position in a marketplace that is more competitive and challenging than at any other time in history.
"No doubt the Super Bowl and the Winter Olympics (and NFL football) combined to help deliver a record number of viewers to the network this year, but it's significant to note that, even excluding sports from all the averages, we are still No. 1 in the key 18-49 demo for scripted programming and/or unscripted programming, not to mention first in total viewers in the unscripted category. Big hits like 'This Is Us,' the 'Chicago' franchise, 'The Good Place,' 'Will & Grace, 'America's Got Talent,' 'World of Dance,' 'The Voice,' and 'Ellen's Game of Games' — to name but a few — are extremely popular, yes, but they also represent a level of upscale quality that continues to define the NBC brand."
Pacing NBC's top-ranked regular lineup for the season are television's No. 1 drama in 18-49 and total viewers, "This Is Us"; the No. 1 primetime series on television in 18-49 and total viewers ("live plus same day"), "Sunday Night Football"; the No. 1 alternative series in 18-49 and total viewers, "America's Got Talent"; timeslot wins generated by each of the network's "Chicago" dramas, which represent three of the top four 10 p.m. dramas on the "Big 4" in 18-49; Friday's No. 1 newsmagazine, "Dateline NBC"; the top-scoring new in-season alternative series of the past two years, "Ellen's Game of Games"; and the most-watched new summer series, "Making It."
That regular-schedule strength was teamed this season with NBC Sports' coverage of the Super Bowl, which will rank as the most-watched program of 2018; the PyeongChang Olympics, which scored as the most dominant Winter Games on record; and "Sunday Night Football," which finished as primetime's No. 1 show for an unprecedented seventh consecutive season (L+SD).
In total viewers, NBC will finish the September to September season No. 1 for the first time in 16 years, with these "most current" total-viewer averages with two weeks left to count in the 52-week season: NBC, 7.8 million; CBS, 7.7 million; ABC, 5.5 million; FOX, 4.2 million; CW, 1.5 million. NBC last ranked No. 1 for a season in total viewers in 2001-02.
Even excluding all sports, NBC is running closer to CBS at this point in the season in total viewers than it's been in 15 years, since 2002-03 (currently within 1.044 million total viewers of CBS excluding sports, best since the gap was 614,000 in 2002-03).
Among all programs, NBC is winning the season not only in adults 18-49, but also ranks No. 1 among the "Big 4" networks in every other key demographic - adults, men and women 25-54; men and women 18-49; and adults, men and women 18-34. It's the first time in 10 years a network has won the 52-week season in every key demographic and total viewers, a feat that was last accomplished by FOX in 2007-08.
NBC has won 33 weeks this season in adults 18-49 among the "Big 4" networks (including five ties, L+SD), while CBS, ABC and FOX have won a combined 24 weeks (including seven ties), marking the fifth season in a row NBC has won more weeks in 18-49 than the other "Big 4" networks combined.
NBC's primetime lineup has also dominated the ratings for the summer of 2018, and is headed toward its eighth consecutive summer win in adults 18-49 and fourth in a row in total viewers.
In late-night, NBC leads the season in the daypart's key demographic of adults 18-49 with "The Tonight Show Starring Jimmy Fallon" and "Late Night with Seth Meyers," both of which have won their timeslots in "live plus same day" Nielsens versus the broadcast competition every week this season when in originals.
Leading late-night overall for the season is "Saturday Night Live," which averaged 9.4 million viewers (L+7, originals only). That made this the show's second-most-watched season in 23 years, since "SNL" averaged 9.9 million viewers for originals at this point in 1994-95, trailing over that span only last year's election-fueled average of 11.0 million viewers
2017-18 Primetime Averages thru 50 Weeks, "Most Current"
Total Viewers
Categories
Entertainment Entertainment feature OYT