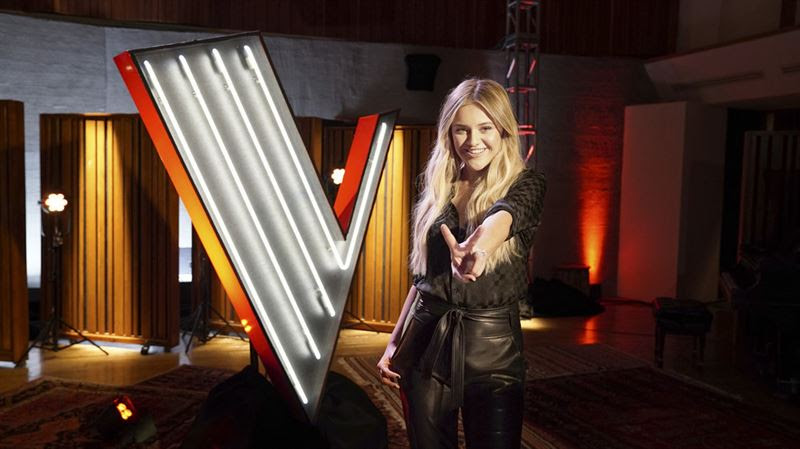 Tue, Sep 11th 2018 12:30 pm
In first-of-its-kind companion series, six deserving comeback artists who did not make a team during blind auditions compete for a chance to perform for America's vote & earn a spot in top 13 live shows on NBC
10-episode 'Voice' 'Comeback Stage' series to run on YouTube, 'The Voice' official app, Instagram TV, Facebook and NBC.com beginning Monday, Sept. 24
Season 15, with coaches Kelly Clarkson, Jennifer Hudson, Adam Levine & Blake Shelton, debuts Sept. 24
Four-time Emmy Award-winning hit musical competition series "The Voice" will debut its first-ever, 10-part "Comeback Stage" companion series in its upcoming 15th season, which premieres Monday, Sept. 24 (8 p.m. ET/PT), on NBC.
Chart-topping country music star and acclaimed singer, songwriter and performer Kelsea Ballerini will serve as the companion series' "fifth coach," and mentor six deserving comeback artists who auditioned for coaches Kelly Clarkson, Jennifer Hudson, Adam Levine and Blake Shelton during the blind auditions but did not make a team. These six comeback artists will compete for a chance to re-enter "The Voice" competition and earn a spot in the top 13 live shows in November.
During the series, Grammy Award nominee Ballerini will pair the six comeback artists into three battle pairings, coaching each artist on an individual song. These artists will go head to head in a battle round, and Ballerini will determine the winner.
Then, in the next phase of the series, the three battle round winners will move forward to the "Comeback Stage" finals, each performing a final song in the series. Based on these performances, Ballerini will identify the final two artists who will move on to the final phase of the series and perform live for America's vote.
On the live playoffs results show airing Tuesday, Nov. 13, the final two comeback artists will return to "The Voice" stage to perform for America's votes in the first "Twitter Instant Save" of the season. The winning comeback artist will then decide which team they would like to join moving forward in the competition: Team Kelly, Team Jennifer, Team Adam or Team Blake.
The "Comeback Stage" series will air on several platforms, including YouTube, "The Voice" official app, IGTV (Instagram), Facebook and NBC.com. A sneak peak of each digital episode will be previewed in "The Voice" broadcast on Sept. 24-25; Oct. 1-2, 8-9, 15, 22, 29; and Nov. 5.
During the blind auditions, the four coaches vie to discover and coach the next singing phenomenon from the country's best vocalists. Adding another layer of excitement this season is the return of the "block," which gives each coach the opportunity to block a fellow coach during the blind auditions so that the blocked coach is unable to recruit the artist on their team.
Ballerini's "grown-up statement" (Rolling Stone), the Black River Entertainment artist's acclaimed sophomore album, "Unapologetically," takes listeners on an intimate journey of loss, life and love. The 12-track compilation - all written or co-written by Ballerini - features the Gold-certified, No. 1 hit "Legends" and current chart-rising single "I Hate Love Songs." This summer, she was Keith Urban's featured artist on the "Graffiti U World Tour" after wrapping her own sold-out headlining "The Unapologetically Tour."
The record-breaker skyrocketed to stardom after releasing Platinum-certified, No. 1 smashes "Love Me Like You Mean It," "Dibs" and "Peter Pan" from her Gold-certified breakout "The First Time."
For more information on Ballerini, visit KelseaBallerini.com and reach out to her on Facebook, Twitter and Instagram.
"The Voice" ruled last season as television's No. 1 alternative series in both adults 18-49 and total viewers, with the show's Monday edition winning its timeslot among the broadcast networks in every key ratings measure. "The Voice's" successful season culminated when its May 22 finale led NBC to the nightlong win, marking the only time that season ABC lost a night that included an original episode of "Roseanne."
Categories
Entertainment OYT