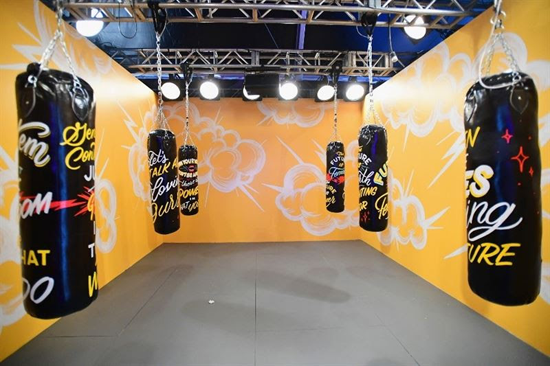 The "SNF" bus section dedicated to "On Her Turf." (NBC image)

Thu, Sep 6th 2018 04:50 pm
Kathryn Tappen to host 'On Her Turf' podcast, 'Sunday Night Football' bus to feature 'On Her Turf' section
The @OnHerTurf Instagram account, which launched during the Olympics earlier this year as a partnership between NBC Sports and Refinery29, celebrates female athletes and inspires all women to be the best version of themselves, on and off the field. That account has nearly 14,000 followers.
NBC Sports is taking that philosophy and expanding the "On Her Turf" audience through several initiatives around the kickoff of the 2018 NFL season and beyond - a podcast hosted by NBC Sports' Kathryn Tappen, a digital video series called "Football is Female," and experiential elements including Refinery's 29Rooms visiting "NFL Kickoff," and an "On Her Turf" section of NBC Sports' "Sunday Night Football bus."
The "On Her Turf" podcast will welcome accomplished guests each week to celebrate the women in sports through conversations about the issues most affecting the industry in order to empower thousands more. The first episode debuts on Wednesday, Sept. 19, and features retired professional golfer Annika Sörenstam and Buffalo Bills owner Kim Pegula. The 20-episode series will debut each Wednesday, with each episode lasting approximately 30 minutes. The podcast is an interview-style format. Click HERE for a teaser of the series.
The "On Her Turf" brand will launch "Football is Female," a new short-form digital video series highlighting high-profile women involved in football ahead of "NFL Kickoff 2018." The women highlighted in the 17-week series will inspire fans with their stories in all areas of football - whether they work for the NFL, work in media, hold a position in a league organization, play football, are the mothers of players, or simply love the sport. The first two episodes of the series will feature NBC Sports' Michele Tafoya, and Dallas Cowboys' Executive Vice President and Chief Brand Officer Charlotte Jones-Anderson. The series will live on NBCSports.com, the NBC Sports and "SNF" social handles, YouTube as well as the "On Her Turf" Instagram. For a teaser video on the series, click HERE.
This season, the "SNF" bus, which travels the country visiting fans in "SNF" cities, will have a section dedicated to "On Her Turf." The activation will include a selfie mirror with repeated "You've Got the Power" messaging on it to raise awareness for the initiative and drive home the message of women's empowerment in sports.
Categories
Entertainment
comments powered by Disqus