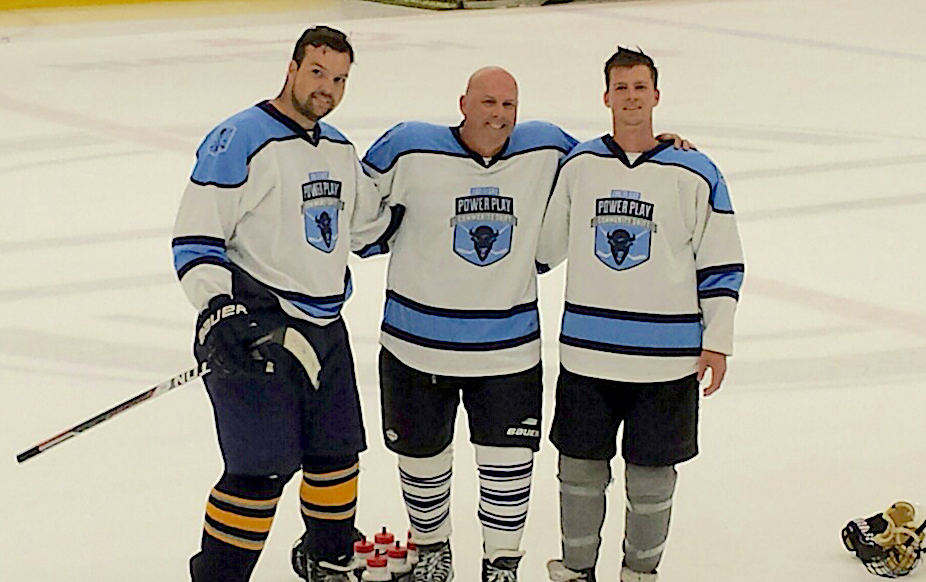 From left: Tyler Crawford, Gary Crawford and Justin Crawford participated in this year's 11 Day Power Play at the HarborCenter in Buffalo. Gary Crawford, now in remission after battling Hodgkin lymphoma, skated with his sons for the first time in almost 12 years during the event.

Tue, Aug 14th 2018 03:20 pm
In January 2016, Justin Crawford received a jolt that would make a Scott Stevens check feel like a mosquito bite: His father, Gary, had been diagnosed with Hodgkin lymphoma.
It's the kind of diagnosis that shakes a family to its core. Hodgkin lymphoma is a form of cancer that originates in white blood cells called lymphocytes, which are part of the human body's immune system.
Gary Crawford immediately underwent major surgery to remove a mass that was located behind his breast bone. Up next was extensive chemotherapy that left him weak and tired.
Still, he made it a point to attend almost every hockey game his sons Tyler, now 24, and Justin, 21, played in at St. Joseph's Collegiate Institute and, later, with Niagara University's club team. In 2016-17, when Tyler and Justin Crawford coached the 18-under Clarence Mustangs to a remarkable run to the national championship game in Lansing, Michigan, Gary Crawford was in the stands.
"He has undoubtedly been my biggest supporter throughout my entire life and hockey career," said Justin Crawford, a senior communication studies major at NU.
That's what made it so much more special this past July 9 as Justin and Tyler lined up next to their cancer-free father on the blue line at HarborCenter in downtown Buffalo. The trio was participating in the 11 Day Power Play, which in two years has raised nearly $2.5 million toward cancer research and other causes.
Gary Crawford's name was the last one announced during player introductions for the Lightning Alumni. Justin Crawford said hearing his dad introduced as a "cancer survivor" was a moment that he'll never forget.
"I was standing there next to him as they called out his name and I tapped his shin guard with my stick. That was followed by a great big hug. It was a very emotional moment for us, one that lays close to the heart."
For the uninitiated, the 11 Day Power Play is a round-the-clock event that requires teams to play in four-hour shifts as a nod to the long, arduous journey that cancer patients navigate on their road to recovery.
Justin Crawford, a Kenmore resident, played for two different teams during this year's event, which ran from July 5-15. He, his brother and his dad skated with the Lightning Alumni from 6-10 a.m. on July 9. Three days later, Justin and Tyler Crawford were back on the ice with Team Crawford from 2-6 a.m.
Though humble, Justin Crawford disclosed that his team won both games, with a combined score of 70-42. Most importantly, his teams raised more than $12,000 toward cancer research - and he had the opportunity to play ice hockey with his father for the first time in nearly 12 years.
"It is one of the sweetest things in the world that my dad is well and well enough to be on the ice playing the game that we love so dearly," Justin Crawford said. "Needless to say, we were having a blast out there and I got to encourage him just as he has done for me time and time again. The game of hockey has never been sweeter than it is now for me and my family. Having all of us on the ice, especially the 'Gare Bear' was so special. All the glory goes to God and I am very thankful to have had this opportunity to play with my dad in a game and for a foundation that means a lot to us."
After skating for four hours at HarborCenter, Justin Crawford headed to Niagara University to serve as a student-leader during summer orientation. Somehow, he was able to summon enough energy to enthusiastically welcome NU's newest students to campus, overseeing activities that ran into the wee hours of the night.
"It was a bit of a grind, but it was an awesome grind that I thoroughly enjoyed," he said. "I'm taken aback when I think about how lucky I was to be able to participate in two things that I love so much: the game of hockey with my family and summer orientation with my NU family. Despite the days being long and tiring, they were some of the greatest days I will ever remember!"
To learn more about Niagara University, visit www.niagara.edu.
Categories
Around WNY Home feature NFP