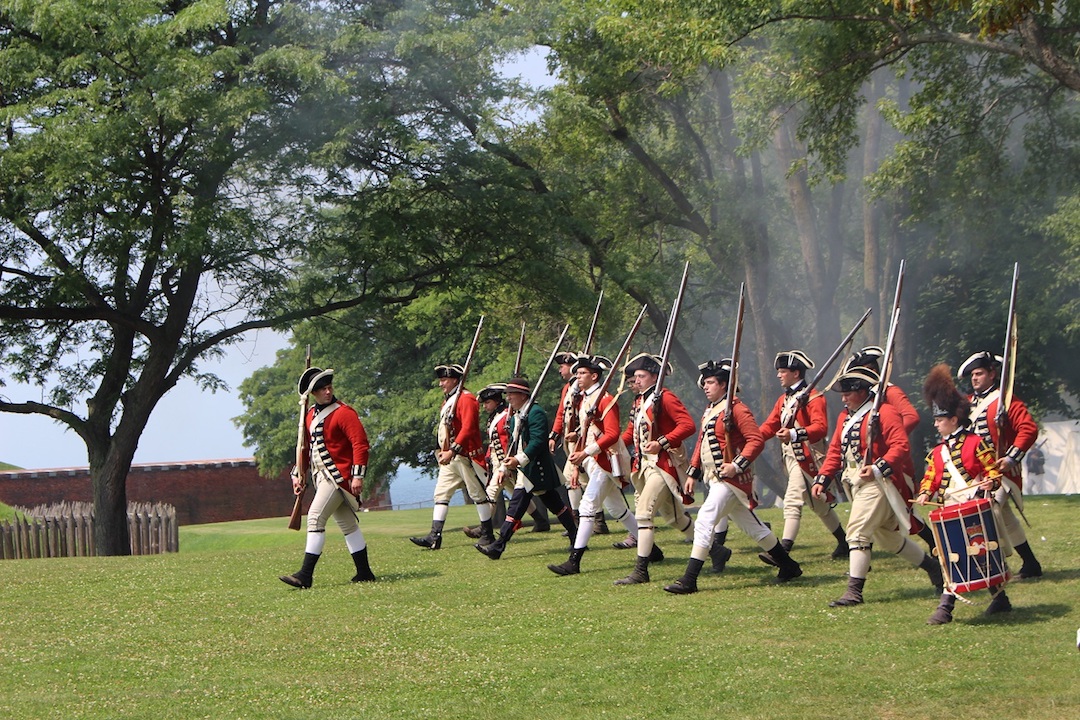 The British will clash with the colonial rebels at "Soldiers of the Revolution," Aug. 18 and 19, at Old Fort Niagara. Battle demonstrations happen at 2 p.m. both days. (Photo by Wayne Peters)

Colonial rebels, British loyalists to clash at 'Soldiers of the Revolution'

Wed, Aug 8th 2018 09:50 pm
On Aug. 18-19, witness American Revolution on Niagara Frontier
Old Fort Niagara's busy season of re-enactments continues with "Soldiers of the Revolution," Aug. 18-19, when the fort's staff and volunteers will work with visiting re-enacting units to share history from the American Revolution on the Niagara Frontier. During this event, visitors will gain an understanding of early America through the perspectives of the colonial rebels versus those who remained loyal to the British crown, called loyalists.
" 'Soldiers of the Revolution' is the last of the weekend-long re-enactments of the season," said Robert Emerson, executive director of the Old Fort Niagara Association. "It's been our pleasure to welcome new and returning visitors to our large French and Indian War and the War of 1812 encampments this summer, and we invite them back to round out their knowledge of the fort by learning about the American Revolution on the Niagara Frontier."
Visitors will have opportunities to meet soldier and civilian re-enactors from the American and British camps, watch artillery and battle demonstrations, join a tour and learn about the conflict, listen to fifes and drums play period music, peek in on British justice practices and Native ransoms, pick sides for a mock wooden-musket battle, and play period games.
Activities begin at 10 a.m. and continue throughout the day. The Officers' Club, just outside the fort's footprint, will be open during "Soldiers of the Revolution" from 11 a.m. to 4 p.m. for tours and access to the World War II display. The lighthouse will also be open from noon to 3 p.m.
Food, snacks, drinks and ice cream will be available for sale each day from 11 a.m. to 4 p.m. at the log cabin.
The cost to attend the event is $13 for adults and $9 for children ages 6-12. It's free for children ages 5 and under, and free for members of the Old Fort Niagara Association.
Old Fort Niagara (www.oldfortniagara.org) is open daily from 9 a.m. to 7 p.m. in July and August. Admissions end 30 minutes before closing. Old Fort Niagara is a Registered National Historic Landmark and New York State Historic Site operated by the Old Fort Niagara Association (a not-for-profit organization) in cooperation with the New York State Office of Parks, Recreation and Historic Preservation.
Categories
Home feature NFP Our Fave Photo Sentinel Sentinel feature