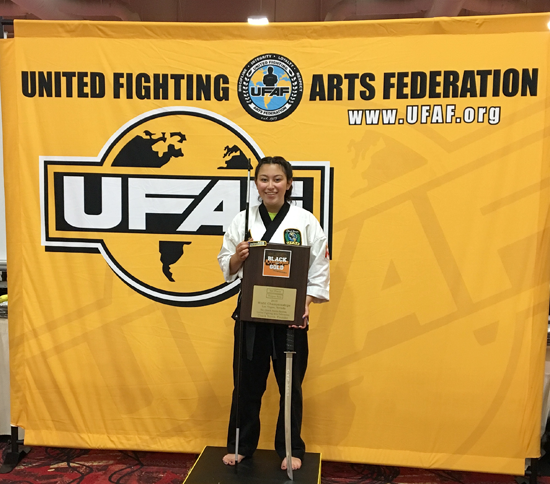 Mon, Jul 30th 2018 11:30 am
On July 14 at the United Fighting Arts Federation tournament at South Point Hotel Casino and Spa in Las Vegas, Carly Presti, 17, took first place in the international training conference and championships weapons kata. Carly has been training for 12 years and is a third-degree black belt under her father, Master John Presti, owner of Presti Karate Centers.
Carly has done a sword kata for many years and has often placed in local tournaments, while finishing second or third at this international tournament. This year, the recent Wilson High School graduate asked her teacher if she could tweak her routine and add her own flair of using two weapons. Such a difficult task would include a bo staff along with a sword. Using two weapons, there is a high risk or errors. She was the only one in her division who used two weapons.
Carly trained every day, whether at the school with others or at home. Grand Master Chuck Norris said he was elated with her, since he has known Carly since birth. Besides the tournament, she took classes in tournament judging, and fighting skills from stuntman and actor Richard Norton (known for his work in "Mad Max" and "Suicide Squad," body guard for ABBA, and training Will Smith).
Others who placed and took several seminars: Joe Gizzarelli of Niagara Falls took second in sparring, Madasyn Weld of Niagara Falls was second in weapons using her kamas, Chase Langer of Niagara Falls placed third in weapons using his bo and was third in sparring, Britini D'Angelo of Niagara Falls took second in nun chucks and open kata and, in the advanced blue belt division, Felix Wolfe of Grand Island won first place in weapons, kata, and fighting. All were in separate divisions.
Also attending was Jordan D'Angelo of Lewiston, and Nick Zaker and TJ Williams of Niagara Falls. All took seminars on teaching, fighting, Krav Maga and Brazilian Jiu-Jitsu.
Categories
School feature Sentinel Tribune