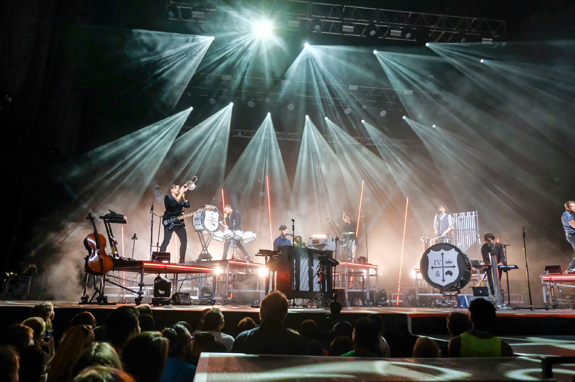 Wed, Jul 25th 2018 12:45 pm
The Kingdom Bound Festival, one of the nation's largest and longest-running Christian music festivals, is set to return to Darien Lake Theme Park this weekend. It will feature top national Christian artists TobyMac, Casting Crowns and for KING & COUNTRY.
The 32nd annual festival is set to take place July 29 through Aug. 1, with the largest crowd in over a half decade expected to attend from across the U.S. and Canada. A limited number of on-site accommodations are still available, as well as full event and single day commuter passes. All tickets include access to festival activities as well as admission to Darien Lake Theme and Water Park.
"Kingdom Bound 2018 is our 32nd year and the mission remains the same ... to present the Gospel through the performing arts," festival director Donna Russo said. "We live in a world looking for hope, encouragement and peace. Kingdom Bound artists and speakers bring the message of hope in a world gone crazy, encouragement to love one another, and peace in the midst of chaos. Don't miss your opportunity to hear the message this summer - it will change your life!"
Kingdom Bound 2018 will feature more than 60 artists and speakers from across the country including, headlining performances from seven-time Grammy winner TobyMac, worship veterans Casting Crowns, and longtime attendee favorites for KING & COUNTRY. Joining them will be "American Idol" finalists Danny Gokey, Mandisa and Hollyn; 2017 Grammy nominee Tauren Wells; along with fan favorites Jordan Feliz, Zach Williams and Remedy Drive. Leading worship this year will be newcomers North Point InsideOut, along with Paul Baloche, We Are Messengers, I Am They and Western New York's own Brothers McClurg.
Other festival events include a children's ministry for ages 4-8; the "Amped Tent" for 9-12-year-olds; the Kingdom Bound marketplace; and more than 40 inspirational seminars, including chats from national communicator Reggie Dabbs, Bob Lenz, Wes Aarum and Carol Mcleod.
Single-day tickets for the festival are $59 and include admission to Darien Lake. Four-day festival passes, including park admission, are available for $149. Tickets are available online through www.itickets.com, by calling 716-633-1117, or in person at Kingdom Bound Ministries, 8550 Sheridan Drive, Williamsville. For more information, call 1-800-461-4485 or visit www.kingdombound.org.
The complete festival lineup (subject to change) is on the website. 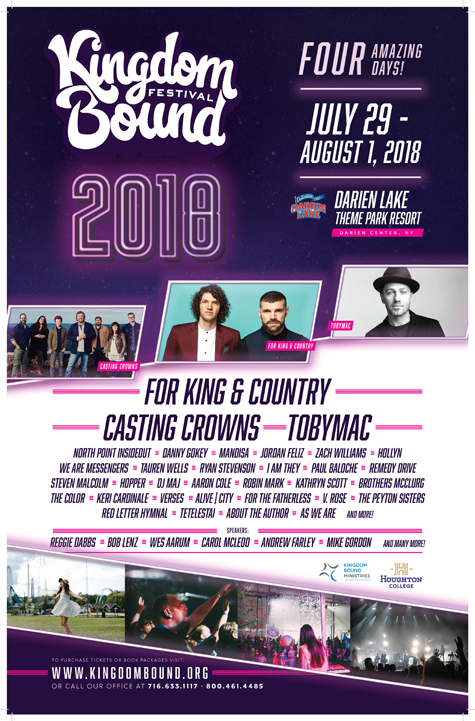 More About Kingdom Bound
Kingdom Bound Ministries, which operates the Kingdom Bound Festival, has been in operation for more than three decades. With a focus on Biblical truth and a reputation for excellence in ministry, Kingdom Bound is more than a music festival: Organizers tackle relevant subject matter such as depression, purity, youth, the opioid epidemic, health and wellness, parenting, self-esteem, the influences of modern media, and a host of other contemporary topics.
About Darien Lake
Darien Lake's wide variety of entertainment has made it "destination fun" since 1964. Located 45 minutes from Niagara Falls (between Buffalo and Rochester), the park boasts more than 45 rides, including six world-class roller coasters; dozens of family rides; several world-class entertainment shows right in the park; the region's largest water park, complete with wave pool; and a 20,000-seat amphitheater, operated by Live Nation, that hosts some of the hottest music artists. The park is open May to October, and welcomes overnight guests in a wide range of accommodations - from a full-service hotel and modern cabins to rental RVs, and RV and tent campsites.
For more information or to order season passes, visit www.DarienLake.com.