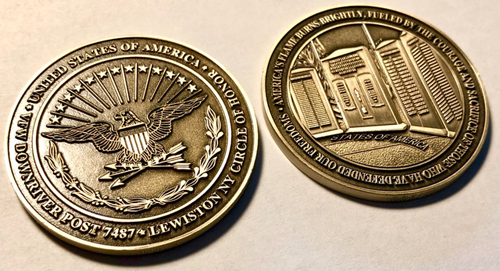 Tue, Jul 17th 2018 01:25 pm
The Lewiston Veterans of Foreign Wars has released its new coin commemorating the future "Circle of Honor." It is the first "challenge" coin the local veterans organization has minted and features the "Circle of Honor" project, which is being undertaken to replace the 1955 memorial at Academy Park with a redesigned and more inclusive monument.
VFW member Vince Canosa said, "This magnificent and extra-large 2-inch-diameter keepsake will be cherished for generations as a lasting tribute to those Lewiston veterans who have served honorably since our nation's earliest days."
Only 300 coins were produced and each is sequentially numbered on the edge. The coins will be given in appreciation to those who donate $100 or more to the "Circle of Honor" project, or who contribute to the project by having their family or loved ones' names engraved on the new monument.
Any veteran, living or deceased, who is from Lewiston or has lived and worked in Lewiston, is eligible to be included. The application can be found online at lewistonvfw.org or by calling Canosa at 716-343-4358.
Elements of this impressive and collectible souvenir coin include a high-definition 3-D relief of the American defense eagle on the front in matte finish gold with an antique recessed metal background. The front also identifies the Downriver Chapter 7487, along with "Lewiston NY Circle of Honor" under the heading "United States of America."
On the reverse is the new memorial design depicting the eternal flame encased in the center granite monument, in addition to the description, "America's Flame Burns Brightly, Fueled by the Courage and Sacrifice of Those Who Have Defended Our Freedoms."
Canosa said, "This new symbol will unite our brothers and sisters in Lewiston who have served the cause and carried on our nation's proud traditions. The coin will also serve as a reminder for all of us that freedom isn't free and that our support for those who have served, and who are serving today, is critical to preserving and protecting our way of life."
The VFW will keep a registry of each coin's number and who received it to help track a coin's provenance and ownership as it is passed down to future generations.