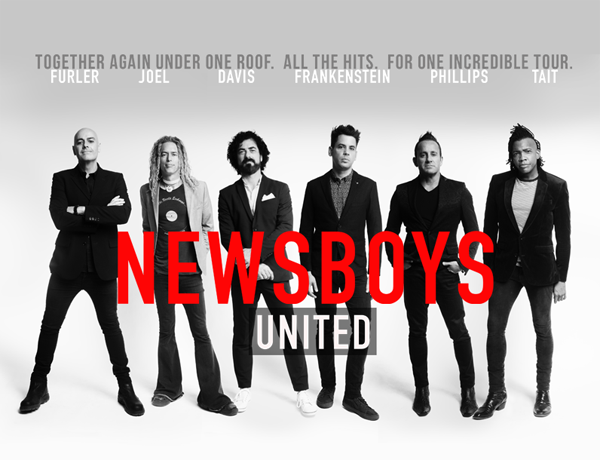 Fri, Jul 13th 2018 08:05 pm
Tour adds 40 fall dates; blockbuster outing spans three decades of hits
Playing to capacity audiences during a history-making string of spring and summer shows, the unprecedented "Newsboys United Tour" has been extended through the end of the year.
Encompassing 40 more U.S. cities this fall, an initial slate of dates was announced Friday, with additional shows forthcoming. Click here for the "Newsboys United Tour" schedule.
The tour stops at The Chapel at CrossPoint in Getzville at 7 p.m. Thursday, Sept. 27.
Showcasing "all the hits ... under one roof ... for one tour," the "Newsboys United Tour" is set to play a total of 100 shows in 2018. The fall outing will kick-off in the Buffalo suburb before hitting Washington, D.C., Seattle; Nashville, Albuquerque and Trenton, New Jersey, among numerous other cities, before concluding in December.
Comprised of current members Michael Tait, Duncan Phillips, Jeff Frankenstein and Jody Davis, along with former bandmates Peter Furler and Phil Joel, the mega-group spans the decades, delivering hit after hit from recent chart-toppers "God's Not Dead" and "We Believe," to such classics as "Shine" and "Entertaining Angels."
"We've been so encouraged and humbled at the response from Newsboys fans, not just in the cities we've visited but from people all over the world," Frankenstein said. "This is so much more than just a tour, it's a celebration of different eras, individuals and the songs that have brought us together."
Sponsored by ChildFund and produced by Premier Productions in partnership with the Newsboys, the fall leg of the "Newsboys United Tour" will once again feature special guest Word recording artist Zealand - founded and fronted by Joel - as well as a special appearance by singer/songwriter Adam Agee.
One of the most influential bands in Christian music history, Newsboys have sold more than 8 million units and amassed eight RIAA Gold certifications, 33 No. 1 radio hits, four Grammy nominations, two American Music Award nominations and multiple Dove Awards.
Newsboys' signature songs include "We Believe," "He Reigns," "Miracles," "Born Again" and their Platinum-certified mega hit, "God's Not Dead." The latter inspired one of the most popular Christian film franchises of all time.
Pollstar magazine ranks Premier Productions as the largest producer of live Christian events both nationally and all over the world. More than 18 million people have attended a Premier event in over 4,000 concerts worldwide. Premier promotes Tours for Hillsong UNITED, Hillsong Worship, Young & Free, Kari Jobe, Jesus Culture, Lecrae, Lauren Daigle, Gaither Homecoming, Sadie Robertson, comedian John Crist, Rend Collective, as well as the annual Winter Jam Tour Spectacular and OUTCRY Tours.
For further information, visit newsboys.com or turningpointpr.com. Follow Newsboys on Facebook, Twitter and Instagram.
Categories
Entertainment On Stage feature Top Entertainment News