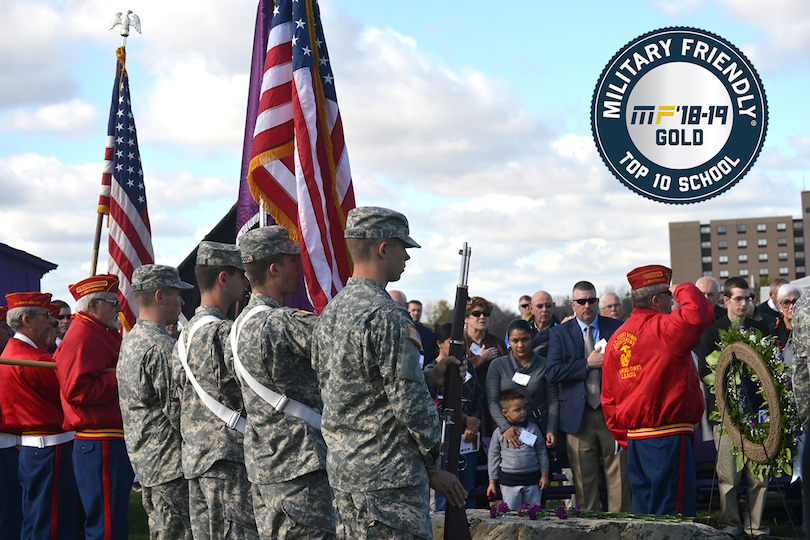 Tue, Jul 10th 2018 11:20 am
Niagara University ranks among the country's top 10 small private schools for American military veterans and their families, according to 2018-19 rankings from Victory Media, publisher of G.I. Jobs, STEM Jobs and Military Spouse.
Niagara ranked in the top 10 for private colleges and universities with less than 10,000 students, the same designation it carried in 2017.
NU has become a fixture in Victory Media's Military Friendly School rankings, as well as other lists that recognize institutions that are doing the most to embrace America's military service members, veterans and spouses as students.
The Military Friendly Schools list annually highlights the colleges, universities, community colleges and trade schools that demonstrate the greatest outcomes in positioning veterans and their families for success in the classroom and after graduation.
"Earning this ongoing recognition reflects Niagara University's commitment to continuously improving the campus experience for our student-veterans," said Robert Healy, director of veterans' services. "We are grateful for the service of the men and women who have given of themselves to make our freedoms a reality, and we go to great lengths to help them achieve their goals as they transition into civilian life."
Institutions earning the Military Friendly ​School designation were evaluated using both public data sources and responses from a proprietary survey.
This year, for the first time, student survey data was taken into consideration for the designation. More than 1,400 schools participated in the 2018-19 survey.
Methodology, criteria and weightings were determined by Victory Media with input from the military friendly ​advisory council of independent leaders in the higher education and military recruitment community. Final ratings were determined by combining the institution's survey scores with the assessment of the institution's ability to meet thresholds for student retention, graduation, job placement, loan repayment, persistence (degree advancement or transfer) and loan default rates for all students and, specifically, for student-veterans.
The Military Friendly Schools list will be published in an upcoming issue of G.I. Jobs magazine and can be found at www.militaryfriendly.com.
"Our ability to apply a clear, consistent standard to colleges creates a competitive atmosphere that encourages colleges to invest in programs to provide educational outcomes that are better for veterans," said Daniel Nichols, chief product officer of Victory Media and head of Military Friendly development.
Niagara University has a long history of honoring and supporting military students, veterans and their families. The Catholic and Vincentian university supports a U.S. Army ROTC program, which placed third in the nation on the National Accessions Outcome Metrics List in 2017, and participates in the Department of Veterans Affairs GI Bill Yellow Ribbon Program, a provision of the Post-9/11 Veterans Educational Assistance Act of 2008.
Military alumni of Niagara include two Medal of Honor recipients, Gen. William Donovan and Lt. John Bobo, and a humanitarian nominated for sainthood, Father Nelson Baker.
For more information about Niagara University's efforts to assist American veterans, call 716-286-8341 or visit www.niagara.edu/veterans.
Categories
Around WNY NFP Top Around WNY Feature
comments powered by Disqus