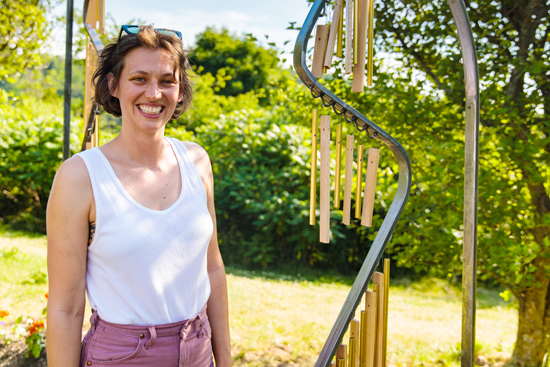 Mon, Jun 25th 2018 02:25 pm
Artpark & Company announces two new installations to the Artpark Percussion Garden: "Gong Temple - Musical Architecture Study" by William Close and "Chime Sprouts" by Vanessa Lee Jackson.
"Gong Temple" was created by Close, who recently performed on his Earth Harp at Artpark's KeyBank Summer Solstice Celebration. "Gong Temple" is supported by The Rupp Foundation.
This interactive sonic sculpture is inspired by various structures found around the world that are created specifically to house gongs and giant bells, and resonant sound. Using resonant aluminum tubes, Close created an interpretation of an Asian temple to become the structure to house gongs from China.
"Gongs are amazing instruments. It is said that within the crescendo of a large gong all frequencies can be heard, also known as white noise. Other places in nature that white noise occurs is in the roar of a rushing river or in the crashing of waves on a beach," Close said. "It is powerful full frequency sound!"
"Chime Sprouts" is an installation of sound and movement that is activated by the wind or user. The organic shapes that house the brass chimes stem directly from the earth to evoke plants sprouting from the ground - like trees or tall grass that magically have the capability of simmering sound when touched by the breeze. Since the user can also play a role in the musicality of these art-objects, the touch received by the chimes becomes a collaboration between the individual and the air. By noticing the force of the wind as equivalent to one's own energies, one can restore a connection with nature that perhaps has been lost. 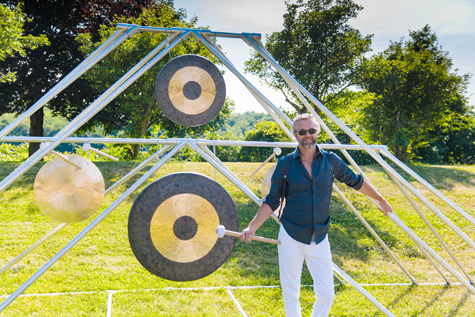 "Gong Temple - Musical Architecture Study" by William Close. (Artpark & Company photo by Jordan Oscar)
About William Close
Close has been creating new instruments for more than 20 years and has invented over 100 new musical designs.
Developed in 1999, his most notable instrument is the Earth Harp, the largest stringed instrument on the planet. The body of the instrument rests on the stage and the strings travel out over the audience attaching to the back of the theater, turning the theater/concert hall, architecture and landscape into the instrument.
Close studied sculpture and sound design at the Art Institute of Chicago. His unique combination of sculpture, music and installation art blossomed into a new genre of music-making designs. His installations and performances have been experienced throughout the world. Some of Close's other instruments include the Drum Orb, the Percussion Jacket, the Aquatar and the Wing Harp.
Close is also the founder and artistic director of MASS (Music Architecture Sound and Sculpture) Ensemble. The group works with Close's unique designs to create music-based stage shows that push the envelope of the musical experience.
Close's work explores the connection between architecture and music. Inspired by the quote "architecture is frozen music," he creates musical installations that use the architecture as part of the instrument. He has developed two symphonic houses working with architects to build the musical instruments into the architecture.
Click here for more information on William Close. 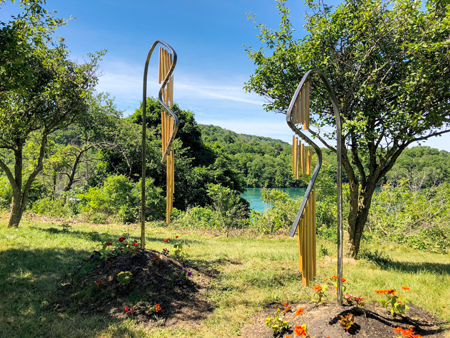 "Chime Sprouts" (Photo by Tim Armstrong)
About Vanessa Lee Jackson
Jackson is an artist, designer and craft enthusiast based in Toronto. She creates custom furniture, objects and sculpture using the various mediums of wood, metal, textiles, concrete, dye and paint to arrive at eclectic contemporary designs.
Drawn toward surreal, organic shapes, Jackson seeks to create a balancing point between function and décor within her art-objects.
Jackson is an MFA artist from OCAD University. She was in residence at Artpark for 10 days in June as part of WARP (Working Artist Residency Program).
Artpark Percussion Garden
Located in the lower park, each element of the Artpark Percussion Garden presents playful opportunities for visitors to explore the different ways to interact and produce sound while posing curious questions on the nature of a performance, music-making and relationships within the natural environment of the park. All of this is free of charge.
Other current installations include: "Beat Blossom" (Shasti O'Leary Soudant in collaboration with Cyro Baptista); "SwingSet" and "Chime Tree: (David Cossin); "Earth Drums" (Glenn Kotche); "Scorpiotron" (Dave Hind); "Make it Rain Teeter Totter" (Julian Majewski); and "Lawn Chair" (Tanis Winslow, Stephanie Kowalski, Jasper Reese and The Adventure Department).
The Percussion Garden has been made possible by a gift from the Charles D. and Mary A. Bauer Foundation.
For more information on Artpark, visit www.artpark.net.
Categories
Around WNY Artpark Entertainment NFP Our Fave Photo Top News Features