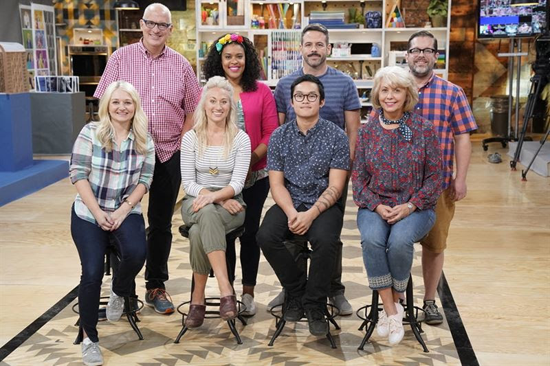 The "Making It" contestants. (NBC photo)

Thu, Jun 21st 2018 02:55 pm
New series will premiere Tuesday, July 31; winners set to receive $100,000 grand prize
Eight makers will vie for the title of "Master Maker" and a $100,000 grand prize on NBC's "Making It," which premieres Tuesday, July 31 (10 p.m. ET/PT).
The six-episode crafting series, hosted and executive produced by Amy Poehler and Nick Offerman, will feature judges Dayna Isom Johnson, Etsy's trend expert; and Simon Doonan, creative ambassador for Barneys New York.
Joanna Gick (Age 37, Chandler, Arizona) — Co-owner of J & J Design Group, Gick is a creative and energetic mother of two, wife and sought-after interior designer whose projects have been featured in HGTV magazine, Better Homes & Gardens, People, The Wall Street Journal and Fit Pregnancy. Gick's love for interior design was fueled by her early love for crafting. She especially loves to create custom kids' rooms. Instagram: @OhSoJo_
Amber Kemp-Gerstel (Age 37, Miami) — A clinical psychologist by training, Kemp-Gerstel grew up in a single-parent home that focused on the importance of higher education and a traditional career path. After taking a huge risk and leaving her career as a psychologist, Kemp-Gerstel dove into crafting with the support of her husband and son. She is now a full-time blogger and shares fun creative content with her followers. Instagram: @damasklove
Billy Kheel (Age 43, Los Angeles) — A Massachusetts native, Kheel attended boarding school and then moved on to Wesleyan University where he played sports and pursued his love of art. Kheel spent time in New York before moving to Los Angeles where he met his wife. Now a full-time artist and visiting art teacher at schools across the city, his focus of applique and felt is very unique from other mediums in the competition and sets his work apart. Instagram: @BKheel
Robert Mahar (Age 46, Los Angeles) — A Midwest native, Mahar's creativity developed from a childhood filled with library books and public television. Mahar is now an artist and designer who teaches imaginative do-it-yourself projects and is at the helm of a craft-driven collection for Knock Knock. His style is informed by an education in studio arts and art history, and 20-plus years of work in creative fields, including 13 years as an appraiser of modern and contemporary art. Instagram: @robert_mahar
Khiem Nguyen (Age 28, Austin, Texas) — Inspired by mid-century modern and Japanese design, Nguyen is a true craftsman. His passion for crafting began with photography and led to him becoming an open major in art school so he could "get his hands into everything." After college, Nguyen and his fiancé moved to Austin where they began A & K Woodworking & Design, specializing in furniture and woodcrafts. Instagram: @akwoodanddesign
Jemma Olson (Age 60, Rockwall, Texas) — A self-proclaimed heartfelt crafter, mother of eight and grandmother of 16, Olson comes from a generation of crafters that made things out of necessity as opposed to beauty. She imparts that same tradition upon her grandkids while teaching them the beauty in making things by hand. Not the stereotypical grandmother by any means, Olson spends time with her younger family members to stay in the know of all things pop culture. Instagram: @athomewithjemmablog
Jeffery Rudell (Age 54, New York City) — Rudell grew up in the Midwest where his father worked at a paper mill and kept him well supplied with cardboard, foil and tissue. Today he is known for the extraordinary paper props he creates for clients such as Tiffany & Co., Unilever, New York Botanical Gardens and a wide range of print and online publications. He's also a nationally known storyteller and a contributor to the Moth Radio Hour. Twitter: @jeffrudell
Nicole Sweeney (Age 31, San Francisco) — With a background in dance and professional education in architecture, Sweeney's work is a confluence of her life experience and artistic vision. Having dabbled in nearly every medium — from reusing paper coffee filters to welding steel — she has found her true passion in working with wood. Sweeney recently departed her full-time position as a display coordinator at Anthropologie to pursue her passion and establish herself as an artist. Instagram: @nicolesweeney_
Every episode of "Making It" will revolve around a central theme that draws inspiration from hugely popular nationwide trends in crafting and DIY, which the whole family can enjoy.
Each episode of the competition will consist of two projects, cleverly designed by Poehler and Offerman, that test the makers' ability to think outside of the box in unpredictable ways. Believing there is no better way to express yourself than by making things by hand, the challenges are also designed to bring out skilled insights and takeaway, touching personal stories and lots of laughs.
First, the "faster-craft" round will be a timed challenge that will test their ability to not only work quickly, but imaginatively, as well. Next, the makers will move to the "master craft collection," a one-of-a-kind themed challenge in which the competitors will need to use their expertise and get inventive in order to assemble a winning craft that fits the theme of that week. In the end, only one will emerge victorious and be named "Master Maker."
Doonan, who is creative ambassador for Barneys New York, has worked in fashion for more than 35 years, winning many awards for his groundbreaking window displays, including the CFDA (Council of Fashion Designers of America) Award.
Isom Johnson, Etsy's trend expert, is in constant pursuit of new and unique finds on Etsy's global marketplace. She is responsible for keeping her finger on the pulse of the hottest trends in the market and what new products are bubbling up.
Categories
Entertainment OYT