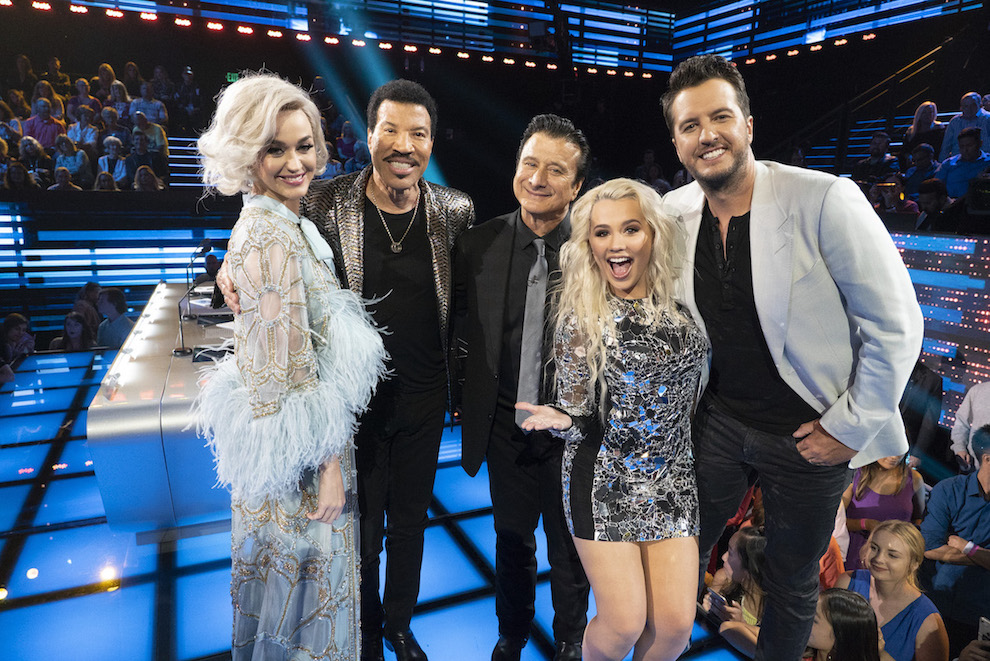 "American Idol": In part one of the two-night season finale on Sunday, the Top 3 finalists performed on the "Idol" stage for their last chance to win America's vote, as the search for America's next superstar continued on its new home. The show offered a handful of surprises, including the return of a rock star. Pictured, from left: Katy Perry, Lionel Richie, Steve Perry, Gabby Barrett and Luke Bryan. (ABC photo by Eric McCandless)

by jmaloni
Mon, May 21st 2018 10:30 am
On the penultimate episode of "American Idol" on ABC Sunday night, a big surprise was waiting for frontrunner Gabby Barrett. Following her performance of Journey's "Don't Stop Believin,' " the song's original vocalist, Steve Perry, showed up in the seating area with Gabby's family and friends.
She immediately recognized the singer, who hasn't toured with the band in two decades, and the show sort of just rolled with the happening. Host Ryan Seacrest led Gabby down the stage runway to Perry, and the two performers embraced. Perry said Gabby's rendition of the song was the best he'd ever heard - and this is a song that very famously had a second life nine years ago when it was featured in the pilot episode of "Glee."
Judges Luke Bryan, Katy Perry and Lionel Richie all but surrendered their talk time to Perry, with Bryan offering just a few words of summary.
Also on the show, Seacrest announced Buffalo would be one of the 2018 audition sites. ABC is expected to release further details soon.
Categories
Entertainment NFP Top Entertainment News