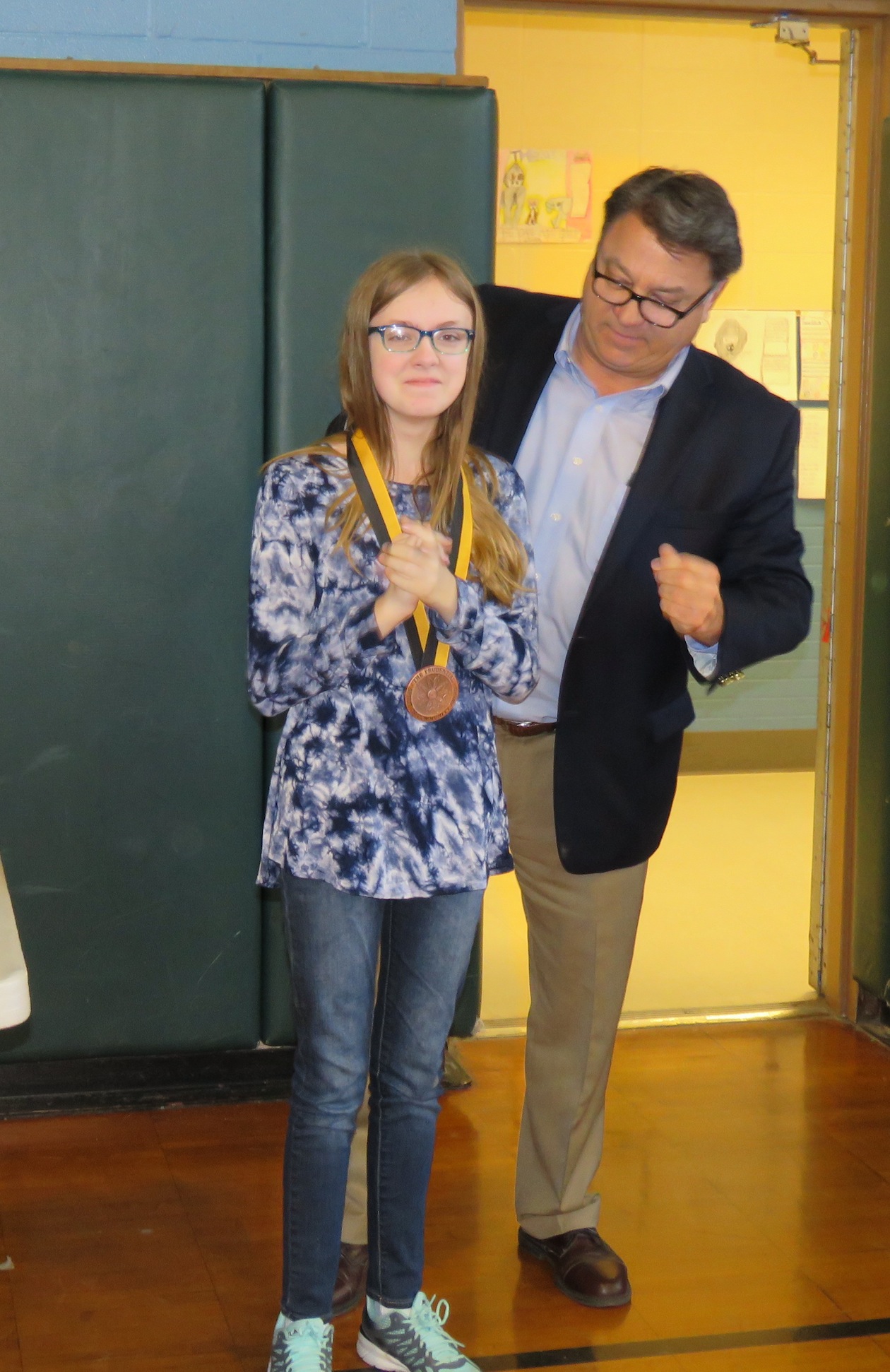 Shelby Walter is overcome with emotion as Phil Tronolone of Prudential wraps the winning medal around her. (Photo by David Yarger)

Fri, May 4th 2018 07:00 am
Shelby Walter joins her sister with prestigious award
By David Yarger
Tribune Editor
Last Friday at Drake Elementary School in North Tonawanda, sixth-grader Shelby Walter was honored with a bronze medallion recognizing her selection as a distinguished finalist for New York in the Prudential Spirit of Community Awards.
According to a release, the Prudential Spirit of Community Awards, conducted by Prudential Financial in partnership with the National Association of Secondary School Principals, represents the United States' largest youth recognition program based exclusively on volunteer community service. All middle and high schools in the United States, along with all Girl Scout councils, county 4-H organizations, Red Cross chapters, YMCAs and affiliates of Points of Light's HandsOn Network, were eligible to select a student or member for a local Prudential Spirit of Community Award last November. Two state honorees - one middle and one high school student - plus a select number of distinguished finalists from each state and the District of Columbia were selected based on criteria such as personal initiative, effort, impact and personal growth.
In front of her teachers, classmates and family, Shelby showed vast emotion as Phil Tronolone of Prudential presented her with the bronze medallion.
Recently, Shelby's sister, Bailey, was also nominated for the award at the high school level. Shelby said her idea stemmed from her sister and also after she saw a close friend with no backpack for school. Shelby was nominated after collecting school supplies to fill more than 200 backpacks for kids in need over the past two years and donated the items to her school's supply closet, ensuring students and teachers have the supplies they need.
"Honestly, I just thought of it when one of my friends didn't have a backpack. I saw them and I felt bad, so I tried to think of what I could do and plus my sister kind of gave me the idea of starting an organization," Shelby said.
Shelby noted she donates anonymously: "I don't really like publicity that much. That's not what it is to me; it's just seeing other people happy." On her show of emotion, Shelby said the award was a complete surprise.
"Honestly, I never knew that I was going to get the award today," Shelby said. "So, I was kind of freaking out and almost dying inside. When I got up there I just felt like crying because I've come all this way."
Drake Elementary Principal Katie Smith said the award shows a bit of what the school is all about.
"It's a tremendous testament to her character and her willingness to want to serve others here at Drake and the community at large. I also think it goes a long way in showing our students that through small and big ways we have an impact on others. It's empowering for kids around her who are the same age or even a little younger to see her as a role model.
"As a school, our job is not only to prepare kids for academic success, but for success in life and so by building character and that willingness to serve others as a citizen, that's our arch," Smith said.
Bailey, a North Tonawanda High School student, was nominated for the award with her program "Let them Dance," an organization she started in fourth grade. The idea stemmed from a close friend dealing with spinal muscular atrophy.
Bailey's program began by selling 100 bracelets in two weeks to raise funds for SMA. The program has evolved over the years, as Bailey said they're trying to "light the world purple" on Aug. 16, National SMA Day, to help spread aware- ness for the condition.
Bailey said, to see Shelby follow in her footsteps of volunteerism is a really unique feat.
"It's huge. I can't believe it. It's with both of us, so I never thought that either of us could come this far. But to see her growing and getting stuff like this; I'm a very proud sister," Bailey said.
Bailey added, "It's amazing to know that our family backs us no matter what. ... We've had so many chances to help people, because we have a family that's always there and we say something and it's no longer a doubt and they say 'We can do this,' or 'We can make it better.' "
A speechless Sue Walter, the duos mother, was blown away by her daughters' success.
"It's amazing," Sue said. "My husband and I; we never thought when they both started it would end up where it has. I don't have words to describe it. I never expected it to go this far."
Categories
NFP Tribune Tribune HP Feature List