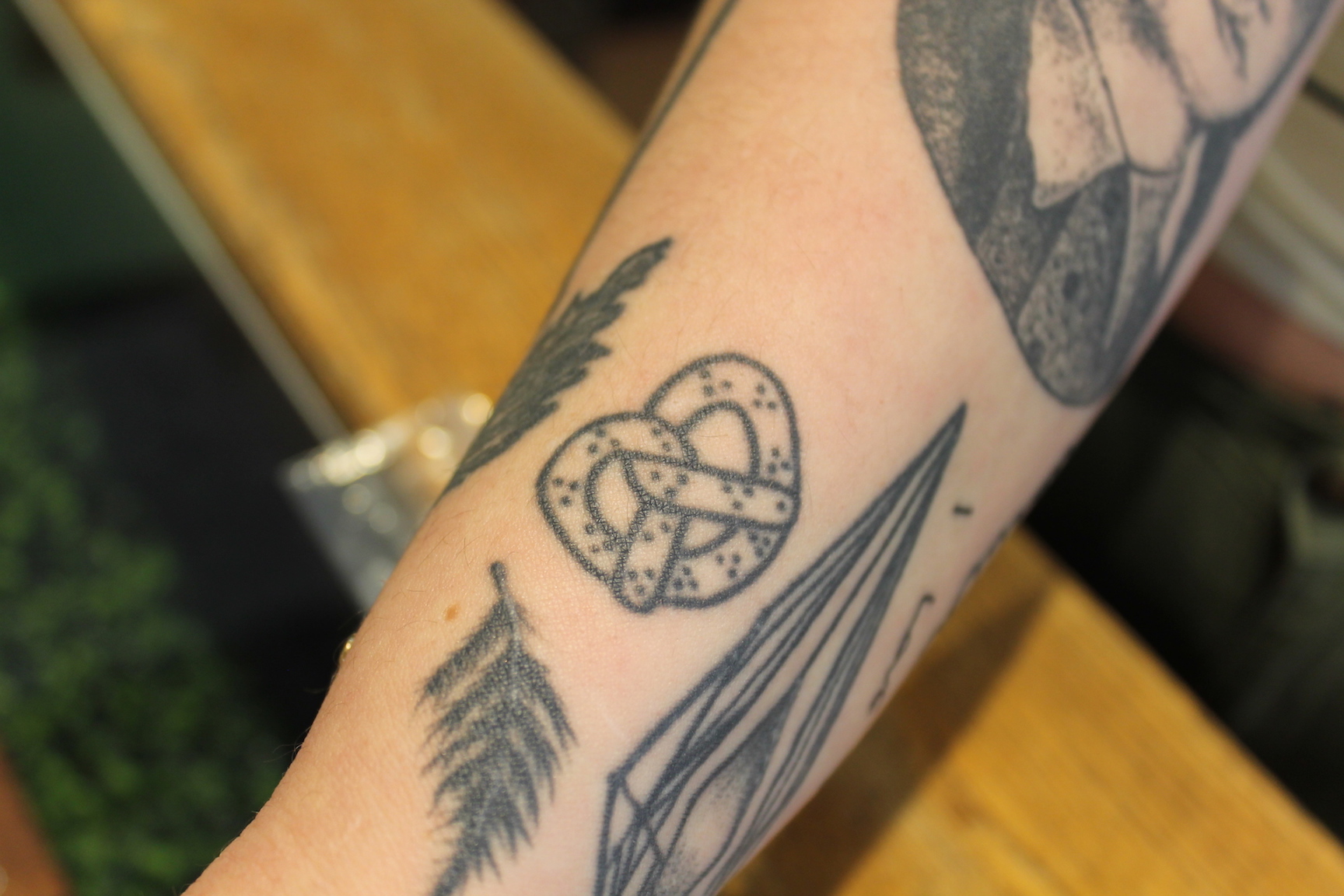 A picture of one of Chloe DeSimone's tattooes.

Sat, Apr 28th 2018 09:45 am
Interested in getting a new tattoo or piercing? Inspiration for new piercings or tattoos is everywhere
By Isabella Susino and Olivia Madore
Special to Niagara Frontier Publications
As many young adults are getting older, they're having a greater need to express their individuality and to show who they really are. Moreover, piercings and tattoos have been around for thousands of years now, being used to express religion by patterns and symbols.
Much alike, people get tattoos that express their interests by getting quotes from their favorite songs, a movement that has been important (such as #MeToo) and many other things. Piercings, like tattoos, can be plain, dainty, bold or eye-catching; there are many types of piercings and each of those piercings have different names and have a distinctive style of jewelry. Virtually everyone is able to get a piercing in any place that they would like in any placement, though some hurt more than others (of course).
Brittney Rosso is a student at Niagara University. She said, "The meaning behind my tattoo it's a lyric from a favorite band of mine."
She had the lyrics, "You are so beautiful yet so unaware of it," tattooed on her ribcage. There wasn't any real purpose at the time, but the words have now developed a deeper meaning for the tattoo placement. "This band and their music is something that means a lot to me," Rosso said. "It's close to my heart, literally, and intimate."
If one loves tattoos that have significant meaning, one can get them as a souvenir from places traveled to instead of getting something that just collects dust.
"Everything on my right arm is inspired by travelling in some way, shape or form," said Ben Schian, another student at Niagara University. "I had an exchange student, Toon, from Thailand, and he's like my brother. He came and stayed with me my junior year of high school and inspired me to travel.
"The national animal of Thailand is the elephant. They're sacred and protected."
The elephant also happens to be his favorite tattoo that he's gotten, out of the 11 he has. "My first tattoo was $20, and it also happens to be the worst one," Schian said. " 'Todos somos humanos,' it's a diversity thing; doesn't matter who you are, where you're from, we're all human.
"Any country I've been to, I've got it in that language: Spanish, Dutch, German, Swedish, Italian, Arabic and Thai. After I've been to more countries, it's going to wrap around, and the top of the sleeve is done." 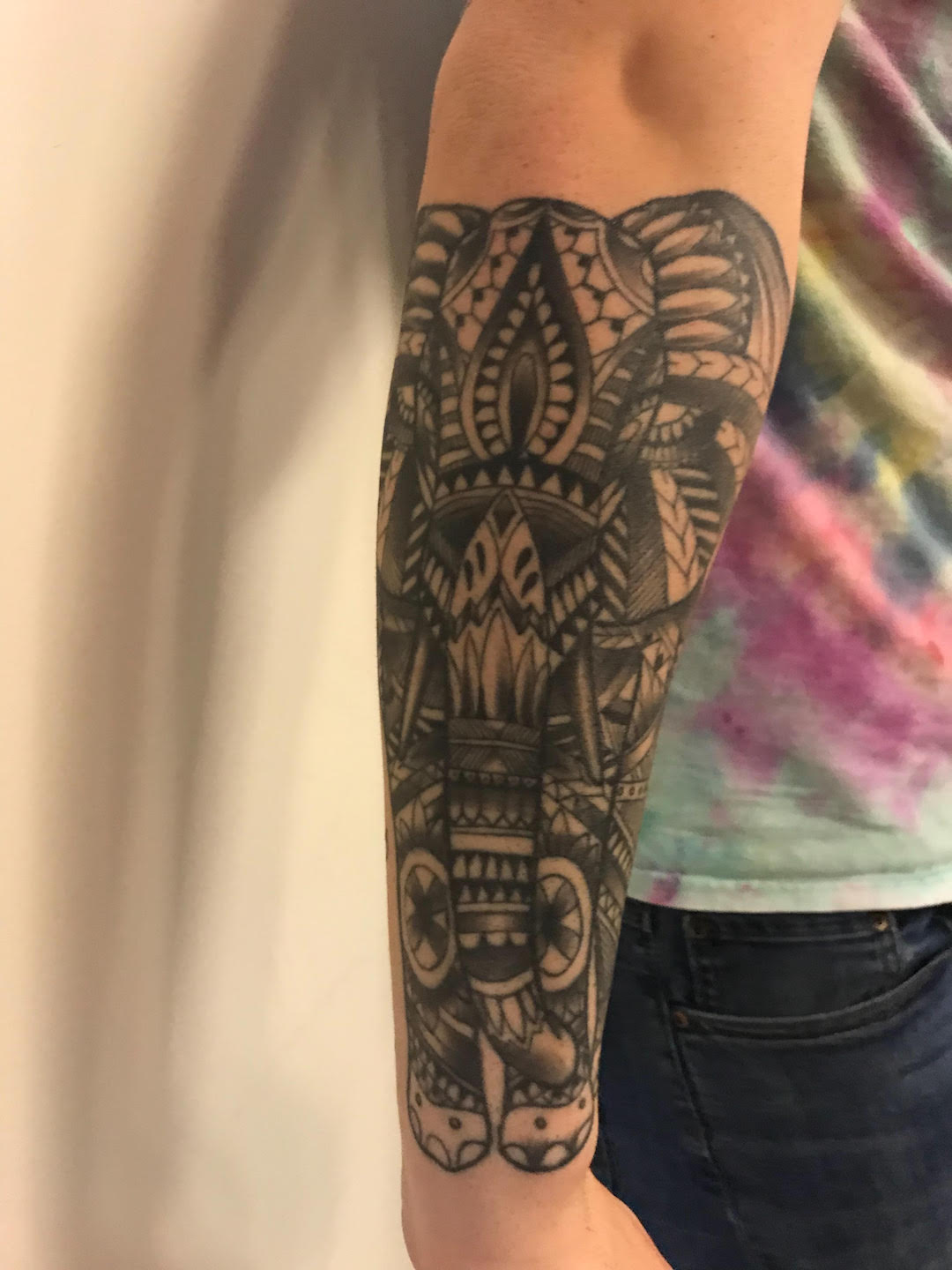 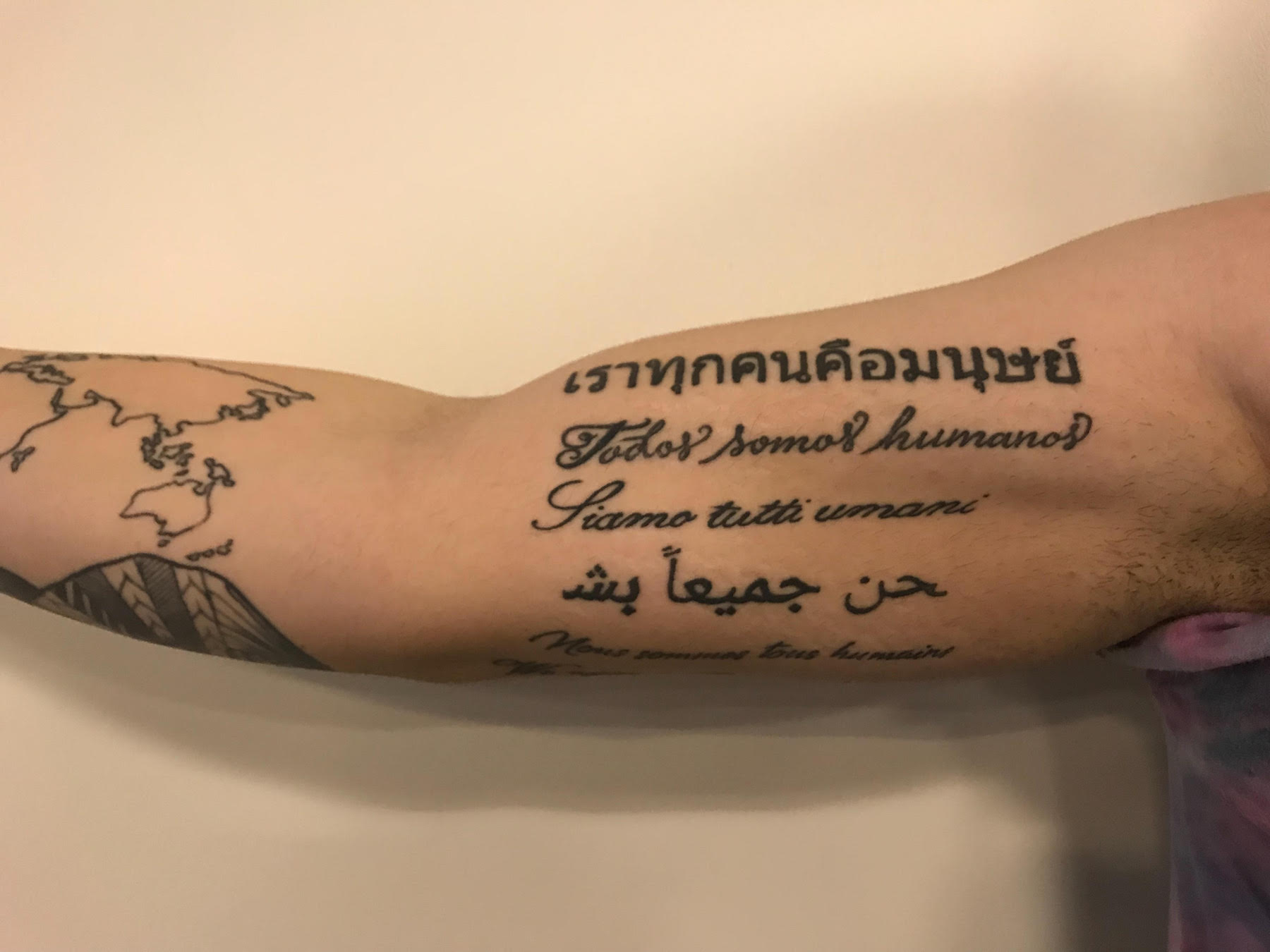 Ben Schian's tattoes.
Schian is not the only one who has started paying for tattoos instead of trinkets.
"That's my souvenirs go-to, rather than actually buying things. The little pretzel is from when I was in Berlin last year; me and my best friend got it," said Chloe DeSimone, manager of Cowpok, a piercing and tattoo shop in Buffalo. "I'm really big into travelling and it's something we always look out to do, but we never have anything in particular planned."
DeSimone recently travelled to Iceland to partake in a photoshoot for Buddha Jewelry Organics.
"I think body art is a fantastic way to be able to express that and eventually mold your body into what you always wanted it to be," she said. "Bodybuilding is a type of body modification; doing your hair is. I think that just tattooing the skin is one of the oldest traditions that just stuck around. I think that people should take advantage of the fact that we can alter ourselves so heavily and into anything we want."
Does placement matter? To some, placement is everything - it's the key to a good tattoo. To others, placement has nothing to do with the tattoo meaning at all.
"When it comes to body art, for me, I feel like how tattoos flow has a lot to do with how bodies are shaped," DeSimone said. "I never pick the particular placement. I always ask the artist what they think (is the) best placement for what I'm looking to do."
DeSimone couldn't say how many tattoos she has because, "They all flow into each other. They're just giant chunks of my body at this point."
Placement meant nothing at all for Ajiatiel "AJ" Chapman, who just got it where it was most comfortable. She said she believes meaning is more important than placement.
"I have three tattoos. The one on my thigh says, 'Together Forever Never Apart.' It's for my mom and I so we know that, no matter what, we're always there for each other. My mom's says, 'Maybe In Distance But Never In Heart,' " Chapman said.
She also stated she is planning on getting a tattoo of her younger sister's heartbeat in the future and wants to get a matching one with a friend whom she considers a big sister.
"I have a turtle in between my shoulder blades, but the ying-yang symbol is definitely my favorite," said Cresley Lederhouse, a Niagara University student and a jewelry consultant at Cowpok. "They're definitely my favorite animal and have been for a very long time. The ying-yang represents balance that's much needed in everyone's life, so it's just a nice reminder to remember the balance in things.
"I got it in this spot because it's like right in the middle of my back, in between my shoulder blades. It's the center of my body and it's close to my heart, but not in the front. Definitely just like a significant reminder. Like I don't see it all the time either, it's when I forget that I have it, which makes it even better."
As for the piercers and tattoo artists who are helping others to express themselves, their jobs take a great amount of skill.
"I like doing more challenging piercings, like high nostrils, and more advanced piercings like female genital piercings, actually," said Anna Beall, a piercer at Cowpok. "I really like doing those [female genital piercings] because they're a little more technically challenging and they give a lot of women confidence in a part of your body that you're normally trained to be ashamed of."
People come from hours away to get their female genitalia pierced by Beall. Much like her coworker, DeSimone, she said she doesn't know how many tattoos she has.
"They're scattered all over my torso," she said.
DeSimone's favorites include "The one on my arm. I'm currently working on doing my full sleeve. A good friend of mine is working on it. The flowers in the sleeve are all from my mom's garden. It's the one thing she wasn't mad that I did to my body. (Another favorite is) The Cowpok tattoo on my hip that I cherish for different reasons."
As for piercings, a piercer can pretty much put jewelry wherever one wants it.
"My forehead is my favorite. Every time that it comes out, I've always redone it," DeSimone said. "It's just something that I don't see a lot of people with, and it's made me feel super myself when I look in a mirror."
As for her other coworkers at Cowpok, Lederhouse said she feels her philtrum piercing and Beall's septum make each of them feel more confident and more themselves. Lederhouse said her piercing was, "super impulsive, but I saw a bunch of pictures and I didn't want to get anything on my nose pierced yet. That was the first piercing on my face, and I just thought it was like really fierce. Not a lot of people had it and it was just something that was calling for me to get done."
More than tattoos and piercings, complete body modifications are also ranked as one of the more favorable things to do.
"I think a lot of people have a vision of themselves. It starts when you're really young and there's a way you've always wanted yourself to turn out," DeSimone said. "Curating my tongue and splitting it is something I've always wanted to do. I've put it off for a couple of years, but I have friends that have done it."
Whether you're looking to get a new tattoo or piercing, or splitting your tongue, expressing yourself is an important key in life.
Of course, the things one puts on one's body will be there forever. Some people don't realize that. So, the next time you think about getting a new tattoo or piercing, try to make sure you have a good reason for why you're doing what you're doing. 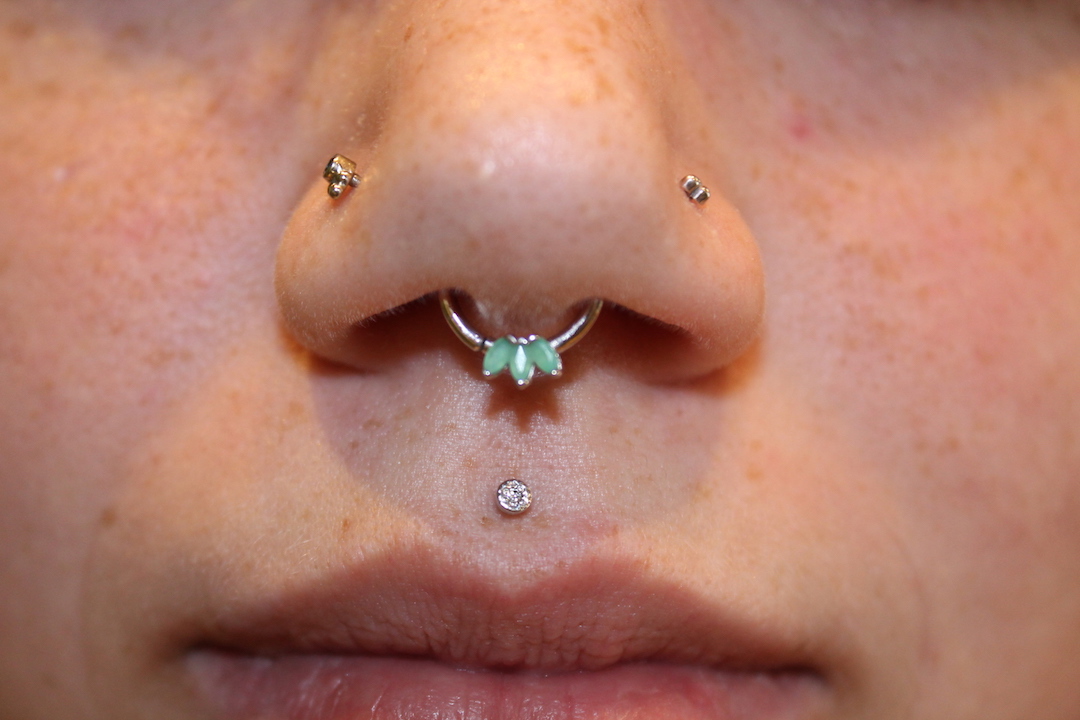