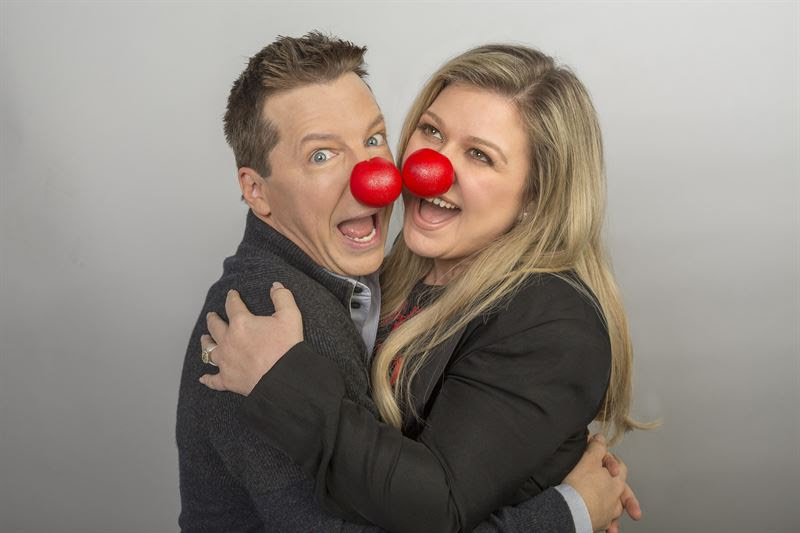 Fri, Apr 27th 2018 05:50 pm
Chelsea Handler, Isla Fisher, Sarah Silverman, Sasheer Zamata & Cedric the Entertainer also star in Jane Lynch-hosted special on Thursday, May 24
Red Nose Day campaign has raised more than $100 million since 2015 to help end child poverty
"Hollywood Game Night," hosted by Emmy Award winner Jane Lynch, will join the Red Nose Day celebration on Thursday, May 24 (9 p.m. ET/PT), with some of the biggest names in entertainment set to prove their pop culture chops.
Kelly Clarkson ("The Voice"), Sean Hayes ("Will & Grace"), Jack Black ("Jumanji: Welcome to the Jungle"), Chelsea Handler ("Chelsea"), Isla Fisher ("Wedding Crashers"), Sarah Silverman ("I Love You, America"), Sasheer Zamata ("Saturday Night Live") and Cedric the Entertainer ("Why Him") will compete in support of the mission to end child poverty.
Additionally, blink-182's Travis Barker will join the "HGN" house band, The Scorekeepers, as a guest drummer for the evening.
The two teams will play Red Nose Day-themed versions of fan-favorite games, including "Super Smash the Buzzer," "Clue-Boom!" and "Lil Picassos."
In this special edition of "Hollywood Game Night," the gameplay works a bit differently — the team that gets the most points in each game earns money to be donated to Red Nose Day. At the end of five rounds, the team that's earned the most money will go on to play a special "Celebrity Name Game" for the chance to raise even more funds.
As a national partner of Red Nose Day for the past four years, M&M'S will be donating $1 million to the fund and contributing all money raised over the course of "Hollywood Game Night" that evening.
The Red Nose Day campaign has raised more than $100 million since 2015 to help end child poverty.
"Celebrity Ninja Warrior for Red Nose Day" will kick off the evening at 8 p.m., followed by the special edition of "Hollywood Game Night" at 9 p.m., both featuring some of the biggest names in entertainment competing to raise money to ensure children in need are safe, healthy and educated. "The Red Nose Day Special," hosted by Chris Hardwick, will close the night at 10 p.m.
All three hours of programming will work collaboratively to celebrate Red Nose Day and encourage donations.
Red Nose Day is an annual event that harnesses the power of entertainment to raise money and awareness for children living in poverty in America and around the globe. NBC's Red Nose Day programming is a culmination of a seven-week fundraising campaign that brings together millions of Americans around the country to have fun and make a difference. Talent who have supported the campaign include Julia Roberts, Ed Sheeran and Elton John.
Red Nose Day was created by Oscar-nominated and Emmy-winning writer-director Richard Curtis, ("Love Actually," "Four Weddings and a Funeral," "Notting Hill"). It has raised more than $1 billion globally since its launch 30 years ago in the U.K. in 1988.
Categories
Entertainment Entertainment Top Story