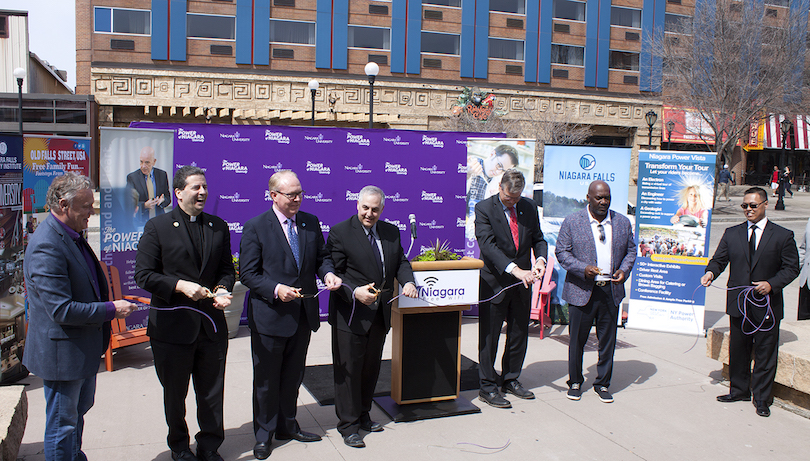 Fri, Apr 27th 2018 05:00 pm
Until recently, visitors to the American side of Niagara Falls had to utilize their own cellular data - sometimes while roaming - when determining where to eat, shop and enjoy themselves.
That changed earlier this year when several local organizations - including Niagara University, the New York Power Authority and the City of Niagara Falls - pooled resources to launch "Niagara Wi-Fi," which offers tourists complimentary wireless internet access throughout the downtown corridor of Niagara Falls.
The public-private initiative, details of which were announced Friday, was orchestrated by the Niagara Global Tourism Institute, a program established by Niagara University in 2014 with grant funding provided through NYPA's power proceeds program as recommended by the Western New York Power Proceeds Allocation Board.
The NGTI was formed to foster collaborative partnerships across the Western New York tourism community that would improve the visitor experience and the industry's competitiveness in the global marketplace.
"Niagara Wi-Fi" checks each of these boxes.
"Internet connectivity is of paramount importance to our tourism industry's continued growth and viability," said Patrick J. Whalen, director of the Niagara Global Tourism Institute. "Western New York has so much to offer visitors in terms of outstanding restaurants, shops and attractions, so when we put this information literally at their fingertips, it vastly increases the likelihood that they'll extend their stays - which contributes to the economic revitalization of Niagara Falls and all of Niagara County.
"Given our lengthy track record of preparing students for success in tourism-related careers, and as the major university in Niagara County, it makes sense for us to play a central role in the development of this project," added the Rev. James J. Maher, C.M., president of Niagara University. "Plus, we expect our students to be among the many who utilize the service while visiting Niagara Falls."
The first phase of "Niagara Free Wi-Fi" went live in January on three blocks of Old Falls Street. Since then, the top priority has been optimizing the network, which stretches from the foot of Niagara Falls State Park to Third Street, before the bustling summer tourism season begins.
Former Buffalo Bill Thurman Thomas' 34 Group is the Wi-Fi vendor, while Transwave Communications installed the hardware and provides bandwidth. Funding for the $150,000 project was split evenly by the NGTI (through NYPA), the City of Niagara Falls and Destination Niagara USA.
"The New York Power Authority is proud to support the Niagara Global Tourism Institute by providing $750,000 in funding over the last several years to support its efforts to develop tourism in Niagara Falls," said John R. Koelmel, NYPA chairman. "Granting Niagara Falls' visitors access to free Wi-Fi is a significant step toward transforming the American side of the falls into a premier tourist destination."
Phase two of the project will include extending the network's footprint throughout the developing downtown area in Niagara Falls.
"Niagara Free Wi-Fi" will also help local tourism officials glean information from the more than 8 million tourists who visit Niagara Falls each year. Whenever a person logs on to the network, he or she opts in to transmit web surfing data.
"The installation of the Wi-Fi network is an exciting addition to Old Falls Street, one that will improve and enhance the visitor experience to our downtown corridor," said Niagara Falls Mayor Paul Dyster. "Thanks to our community partners for their efforts in helping to modernize the world-class destination we are proud to call home!"
"As we look forward to another successful summer season, we are excited that our visitors and residents will have access to free Wi-Fi on Old Falls Street, one of the most heavily trafficked areas in our downtown core," said John Percy, president and CEO of Destination Niagara USA. "It is extremely important that we make it as simple as possible for visitors to more easily access information about all of the exciting attractions, delicious restaurants and beautiful communities across Niagara County. We are proud to have partnered with the Niagara Global Tourism Institute to bring this important Wi-Fi project to fruition."
Contributing organizations include NU and its Niagara Global Tourism Institute; NYPA; Niagara Falls; USA Niagara Development Corp./Empire State Development; Destination Niagara USA; Niagara County Community College; Maid of the Mist Corp.; and the Conference and Event Center Niagara Falls.
The Power Authority's funding awards were made possible from net earnings from the sale of unused hydropower from NYPA's Niagara Power Plant and stem from legislation signed into law by Gov. Andrew Cuomo in 2012. To be eligible for power proceeds awards, enterprises must be located within a 30-mile radius of NYPA's Niagara Power Plant while the projects must support the growth of business and lead to the creation or protection of jobs. Contracts include provisions for periodic audits to ensure the funds are used for agreed-upon purposes.
Along with being the first institution to offer a bachelor's degree in tourism, NU's College of Hospitality and Tourism Management is consistently ranked among the best in the world. It is a founding member of Hotel Schools of Distinction (formerly Leading Hotel Schools of the World), a global network of premier higher-ed institutions.
NU's student chapter of the Club Managers Association of America has been ranked No. 1 in the country for nine consecutive years. Hospitality and tourism management majors serve on consulting teams at the world-famous Waldorf-Astoria hotel in New York City, participate in courses aboard a cruise ships, and help organize events at the Super Bowl and other major sports and tourism venues.
To learn more about the Niagara Global Tourism Institute, visit https://ngtinstitute.org.
Categories
Around WNY NFP Sentinel Sentinel HP Feature Picture Top News Features Tribune HP Feature Picture