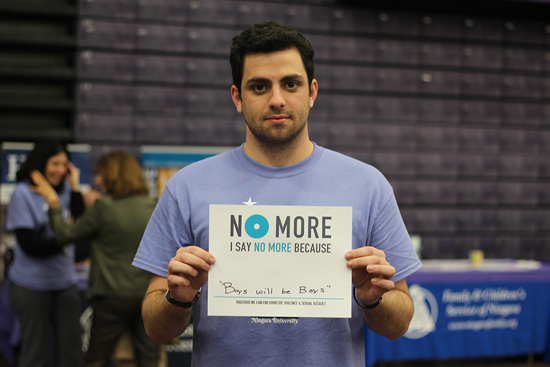 Niagara University students and alumni are holding an event May 11 to raise funds for the Nicholas Albano Memorial Scholarship. Albano, pictured here at NU's "Take Back the Night" event in 2017, died unexpectedly last summer.

Mon, Apr 23rd 2018 12:25 pm
Those at Niagara University who knew Nicholas Albano would tell you that he wasn't merely a fan of superheroes - he was a superhero. His powers: love, compassion and kindness.
Albano passed away unexpectedly last summer after battling epilepsy, but NU students and alumni are keeping alive the memory of the Captain America aficionado by presenting a May 11 fundraiser at Artpark's Mainstage Theater. Titled "CAPbaret," the two-part, two-hour event, which begins at 7 p.m., will feature Albano's friends, classmates and NU alumni singing a selection of his favorite songs.
Tickets are $10, with all proceeds benefitting the Nicholas Albano Memorial Scholarship.
The event was conceived by Sarah Joslin, a 2017 Niagara University graduate who said "CAPbaret" is a way to remember Albano's wonderful qualities and achievements.
"We are bringing back theater alumni from NU, as well as other friends of Nick's, who love to sing," Joslin said. "They're coming from all over America for this event, so it's going to be extremely special."
Albano fought with epilepsy for years, while continuing to change the people around him for the better. He got along with everyone, and his kindness shone brightly for every person he encountered.
Throughout his four-year career at NU, Albano was president of Active Minds, a student-run club that brings awareness to mental illnesses, and vice president of the psychology club. He traveled the country, presenting his research on a variety of topics to the Eastern Psychological Association. He endeavored to become a high school counselor. Thus, the scholarship established in his name will benefit future psychology majors at NU, giving students the opportunity to go out and do good for others, something Albano excelled at.
"He was a friend of the world," Joslin said. "I think one of Nick's most beautiful qualities was the ability to make people come together."
Those involved in creating "CAPbaret," therefore, decided the most fitting way to honor Albano was to bring people together. He had also developed a fondness for theater during his time at NU, making its incorporation into the event obvious.
Albano was an advocate for eliminating the stigma surrounding mental illnesses and took initiative in bringing awareness to sexual assault. Many people, according to Joslin, believe Albano was "the strongest advocate for social injustices that they have ever known."
Albano helped coordinate Niagara University's annual "Take Back the Night" event, which aims to end sexual, relationship and domestic violence in all forms. During the most recent installment of the event in April, a new honor, the Nicholas Albano Student Advocacy Award, was presented to Albano's friend, Andrew Hayes.
Hayes and Joslin said Albano went out of his way to help others by being kind and pushed them to be the best versions of themselves. In other words, he was a captain to many.
"If you were Nick's friend, you could be certain that he would drop everything to be there for you when you needed him," Joslin said.
Tickets for "CAPbaret are available online at https://capbaret.brownpapertickets.com. They will also be sold at the venue.
For more information on NU's psychology program, call 716-286-8444 or visit www.niagara.edu/psychology.
Categories
Around WNY NFP Our Fave Photo Our Favorite Top Around WNY Feature