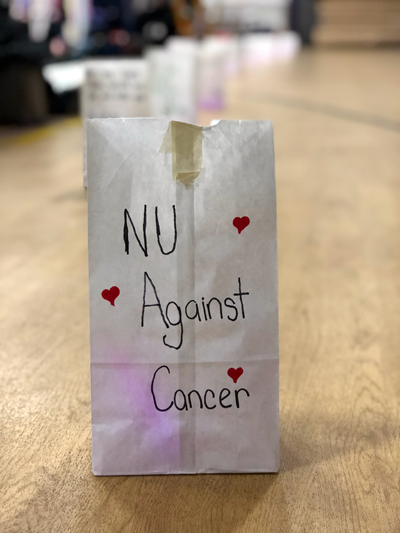 Sat, Apr 21st 2018 11:35 am
By Kelly McCuen
Special to Niagara Frontier Publications
Cancer is a disease, but not just a disease for one person: It has an enormous impact on the ones who are diagnosed with it, along with their loved ones.
Every year, millions of people are diagnosed with cancer around the world. According to the American Cancer Society, cancer begins when cells grow out of control and crowd out normal cells.
There are many forms of cancer, which affect all different types of people - from breast cancer to leukemia, from adults to children, and from men to women. It has no format or time line as to who or when it will impact someone.
Cancer drastically changes the lives of the people it touches in more ways than one.
But it can also bring a community or even a college campus of students together to help raise awareness and money to help in the fight against it.
Relay For Life is the top fundraising event for the American Cancer Society. The event takes place across a number of communities and countries throughout the world. It brings people together to take action against cancer.
Each event is between six to 24 hours long, with teams walking around a designated track and members alternating laps, as someone is required to be walking at all times. The American Cancer Society says this event it signifies how cancer never sleeps.
Relay For Life brings people together to remember the lives lost from cancer and to honor the survivors. Whether someone has personally been touched by cancer or not, anyone is welcome to participate in Relay For Life.
"Events like Relay For Life mean awareness - being thankful for the strides we've made and hopeful for future advancements," said cancer survivor Diane.
On Friday, April 13, Niagara University held its very own Relay For Life for students and faculty, along with people from around the community. Teams and participants were able to raise over $10,000 for the American Cancer Society through their fundraising efforts.
The event began at 6 p.m. in the school's recreation center, where participants gathered together to begin the night. The Relay took off with a heartfelt opening ceremony, which led into the Survivor and Caregiver Lap. A few survivors and ones currently impacted by cancer who were present that night took the first lap around the gymnasium. Once they took that first lap, they were cheered on by the rest of the people in attendance, which was a moment that was incredibly special for everyone.
Once the Survivor and Caregiver Lap concluded, everyone else was encouraged to join in with them on the walk around the gym. Students, faculty members, adults and even children all joined together to start their night of walking for a cause.
It was a time for everyone there to get together and realize the reason behind why they were walking, whether it was personal or just because they wanted to help. Being able to be a part of something that seemed so small yet was so big in its impact was a once-in-a-lifetime feeling.
Although the constant walking around the gym was a major part of the night, and the significance of the ongoing fight against cancer was extremely important, participants were able to do several other activities throughout the night.
Around the gym tables were set up from a number of teams with further fundraising opportunities available for everyone. 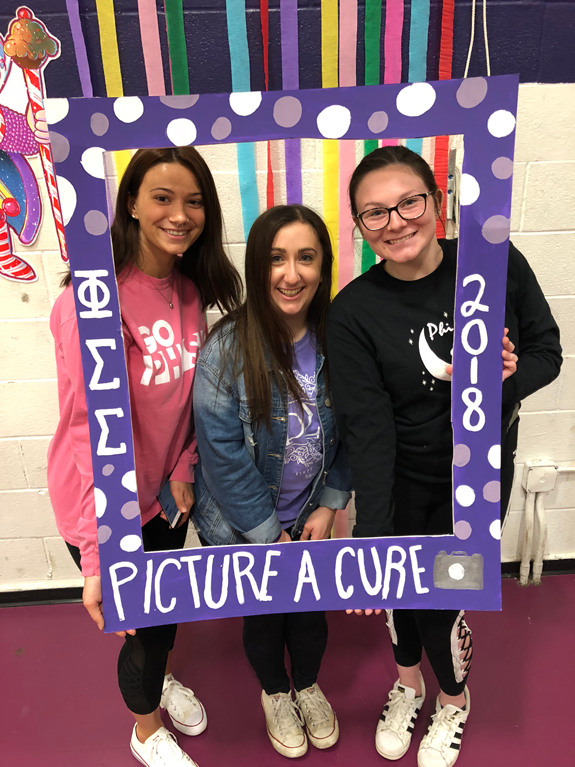 Niagara University students Sofie Perrino, Natalie Durante and Emily Scarsella at Relay For Life.
One team present was comprised of Niagara University sorority Phi Sigma Sigma. Its fundraising event that night was lap beads. Participants had the opportunity to buy a necklace provided by the sorority. Every time a participant finished a lap, they were able to add a new bead to their necklace.
Phi Sigma Sigma raised more than $300 for the American Cancer Society with its fundraising efforts.
"It felt great to be able to raise money with my sorority for such a good cause," said Emily Scarsella, a student and Phi Sigma Sigma member.
Along with further fundraising opportunities, participants were welcomed with Zumba instructors for a portion of the night. It was a moment of fun and exercise that brought everyone together to laugh and have a good time.
Food, drinks, karaoke and much more were available for participants to enjoy throughout their night. However, the most touching part of the night occurred around 9 p.m.
Everyone was asked to gather around two large screens, which was the beginning of a very special moment. A video made with faculty and students from Niagara University played on the screens. It featured them holding up signs with words of courage and names of loved ones impacted by cancer.
The video brought tears to the eyes of people watching, but what came next was an extremely important part of all Relay For Life events. The room was dark, and the outer perimeter of the gym was lined with luminarias, which meant it was time for the Luminaria Ceremony. Names and touching words were written on the luminarias by several of the people in attendance.
Each participant was also given a glow stick and was told to gather around the gym perimeter. A variety of reasons why people were participating that night were called out, and that was when everyone cracked their glow sticks and placed them in a luminaria.
It created a beautiful, glowing effect around the gym, which was a very sentimental moment for a lot of the people.
Silent laps were then made around the gym. That was a time to think about cancer survivors, people who continue their fight against cancer, and the ones lost.
The American Cancer Society explained the ceremony's meaning. The darkness in the room represents the fear patients feel when diagnosed with cancer. The light from the luminarias is to remind all those impacted by cancer that they are not alone.
The ceremony was a moment of complete silence and remembrance.
"The best part of Relay For Life was the ceremony. I believe it was extremely moving and I'll remember it forever," said Madison Genson, a Niagara University student.
Relay For Life is an extraordinary event that everyone should get to experience and be a part of at least once in their lives.
There are several events year-round taking place in a number of communities, states and countries. The Buffalo area alone continues to have these events throughout the upcoming months.
It is extremely easy to find an event that is close, to fundraise for it and to get involved. All one must do is visit the Relay For Life website and click on the tab that says get involved.
Cancer is a disease impacting millions of people each day, and to be able to help in the fight against it is something so rewarding and humbling.
For more information on cancer and Relay For Life, visit the following websites:
Relay For Life
American Cancer Society
Categories
NUsUnlimited