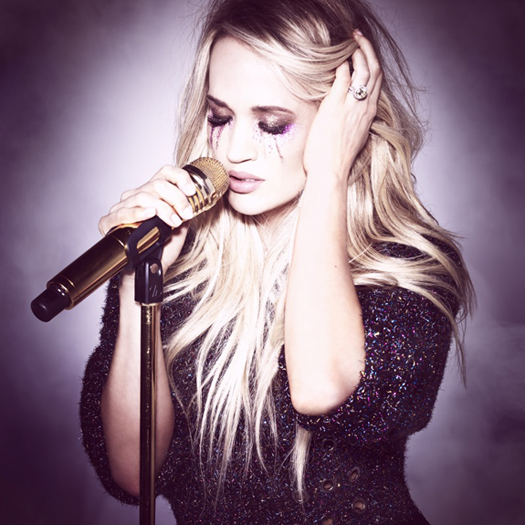 Thu, Apr 19th 2018 02:30 pm
Multi-Platinum global superstar Carrie Underwood will release "Cry Pretty," her first studio album on Capitol Records Nashville, on Sept. 14.
The title track and lead single was released worldwide on April 11 and is the most added song at country radio this week. "Cry Pretty" has already topped the iTunes top songs charts in 12 countries and quickly racked up more than 1.3 million streams in the U.S.
In addition to co-writing the single with Hillary Lindsey, Lori McKenna and Liz Rose (aka The Love Junkies), Underwood is co-producing her album with fellow writer/producer David Garcia.
She said, "At this point in my career, I feel stronger and more creative than ever. I think you can hear that in this new album. It's emotional, it's soulful, it's real, and we also have some fun on there, too. I hope everyone loves it as much as I have loved making it."
On Sunday night at the 53rd Annual Academy of Country Music Awards, Underwood took home her 14th career ACM Award for Vocal Event of the Year for "The Fighter," her collaboration with Keith Urban, after bringing the audience to their feet with her emotional performance of "Cry Pretty." Billboard ranked the "vocal dynamo" performance as the best of the night, touting "this is how you do an award show performance," while Rolling Stone noted Underwood "channeled her inner country-soul diva" during the "knockout rendition."
Underwood, who is a seven-time Grammy Award winner, gives fans an intimate look inside her recording and co-producing process for "Cry Pretty" in this exclusive album trailer.
https://www.youtube.com/watch?v=exnyKfrc-a4
Underwood emerged from the promise of her 2005 "American Idol" win to become a true multiformat, multimedia superstar, spanning achievements in music, television and film. A seven-time Grammy Award winner, she has sold 64 million records worldwide and recorded 26 No. 1 singles, 13 of which she co-wrote.
In 2013, the Grand Ole Opry member starred as Maria von Trapp in NBC's three-hour holiday blockbuster, the Emmy-winning "The Sound of Music Live!," whose airings attracted 44 million viewers.
Her latest Platinum studio album, "Storyteller," produced four No. 1 hits.
2017 marked her fifth season as the voice of primetime television's No. 1 program, "Sunday Night Football." Last November, she co-hosted the CMA Awards for the 10th consecutive year.
Earlier this year, Underwood released the hit event anthem "The Champion" featuring Christopher "Ludacris" Bridges, which she wrote with Brett James, Chris DeStefano and Ludacris, and was produced by Jim Jonsin. The song opened NBC's Super Bowl and was incorporated into the network's coverage of the 2018 Olympic Winter Games.
Stay connected with Carrie:
Categories
Entertainment Entertainment feature