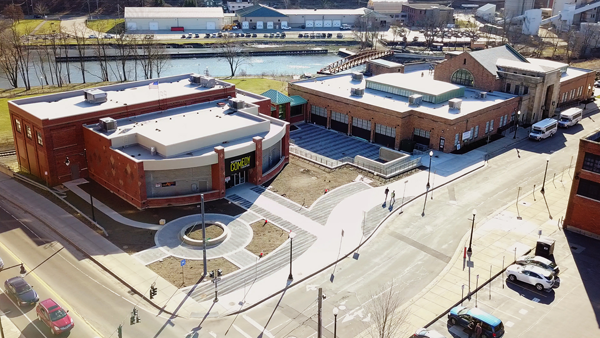 The National Comedy Center, an interactive and immersive museum experience with over 50 exhibits celebrating comedy, will open its doors in Jamestown in August.

Tue, Apr 10th 2018 10:50 pm
The National Comedy Center will celebrate its grand opening with appearances by Amy Schumer, Lily Tomlin, "Saturday Night Live" original season alumni - including Dan Aykroyd - and coincide with annual Lucille Ball Comedy Festival.
Featuring more than 50 immersive and interactive exhibits designed by leading museum design firms in the world, the 37,000-square-foot National Comedy Center visitor experience tells the story of comedy from its origins through the present. It is the first nonprofit cultural institution and national-scale attraction dedicated to the art of comedy.
The opening celebration will feature more than 50 events and 40 artists that include the innovators, creators and legends of comedy. Tickets will go on pre-sale to Members at noon April 27, and go on sale to the public at noon May 4 at www.NationalComedyCenter.org.
Emmy Award-winning comedian Schumer will perform Friday, Aug. 3, with her show "Amy Schumer and Friends" at the Northwest Arena. Comedy legend Tomlin brings "An Evening of Classic Lily Tomlin" center stage at Reg Lenna Center for the Arts on Aug. 4.
On Aug. 2, "Saturday Night Live" cast members Aykroyd, Laraine Newman and Garrett Morris, along with original writer Alan Zweibel, will come together at the Reg Lenna Center for the Arts to share stories and laughs in a conversation about the show's early years.
"Each of these artists has played a significant role in shaping and redefining comedy as we know it today," National Comedy Center Executive Director Journey Gunderson said. "From sketch to stand-up to TV to film, the landscape has been forever changed due to the creativity and, frankly, bravery, of Lily Tomlin and Amy Schumer. Laraine Newman, Dan Aykroyd, Garrett Morris and Alan Zweibel challenged the nation's sensibilities about comedy in what they brought to air in 1975, introducing what became one of the very few cultural phenomena to endure more than four decades."
Malachi Livermore, director of operations and programming for the National Comedy Center, said, "Offering four brilliant minds from the show that broke the late-night television mold is not only a glimpse into the creation of 'Saturday Night Live,' but also a sampling of the National Comedy Center's core mission to share the story of comedy."
Continuing an annual series of National Comedy Center dialogues, Violet Ramis Stiel will offer a stage conversation about her new book, "Ghostbuster's Daughter: Life with My Dad, Harold Ramis."
Festival partner COZI TV will present a special "Conversation with Fran Drescher" as part of the opening week events. "The Nanny" star will share insights on her storied life and career influences, including Lucille Ball, on Aug. 3.
Additional programming includes five comedy showcases featuring comedians with credits, including appearances with Steven Colbert, Conan O'Brien and on "Last Comic Standing." The weekend will also feature National Comedy Center dialogues, exhibit unveilings, block parties, free kids' comedy shows featuring the critically acclaimed "Story Pirates," and tribute events honoring the influential careers of the "First Couple of Comedy": Lucille Ball and Desi Arnaz.
Additional events will be added to the lineup in the coming months.
The National Comedy Center embodies Ball's vision for her hometown of Jamestown to become a destination for the celebration of comedy in a way that educates, fosters and inspires. Design has been led by the most prominent cultural and interactive design firms in the world - whose portfolios collectively include the award-winning 9/11 Memorial Museum, The National Underground Railroad Freedom Center, The College Football Hall of Fame, and "SNL: The Experience." The $50 million endeavor was made possible by state, federal and private philanthropic support.
In a special press briefing at the site on March 30, U.S. Sen. Charles Schumer announced his push for a congressional designation for the center. The new designation would officially make the National Comedy Center the nation's cultural institution dedicated to the art of comedy, recognizing it as the only institution of its kind with the mission of preserving, protecting and showcasing the art of comedy and its role in culture.
The National Comedy Center also operates the Lucille Ball Desi Arnaz Museum, and, for the past 25 years has produced the Lucille Ball Comedy Festival - with performers including Jerry Seinfeld, Jay Leno, Lewis Black, Trevor Noah, Joan Rivers, Ellen DeGeneres, Paula Poundstone, Nick Offerman, Ray Romano, Bob Newhart and The Smothers Brothers.
Tickets and memberships may also be purchased by calling 716-484-0800 or visiting the festival box office located at 2 W. 3rd St., Jamestown.
Categories
Entertainment Entertainment feature NFP