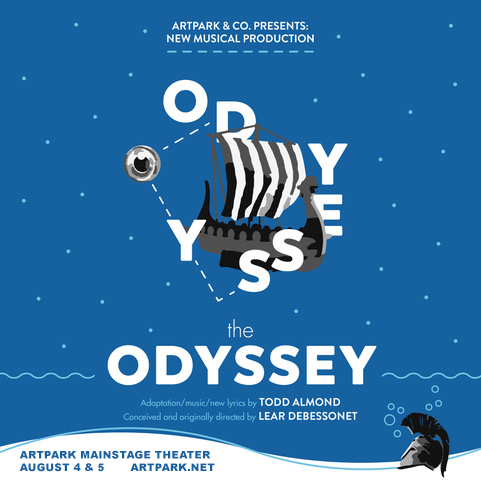 Artpark looks to create groundbreaking community collaboration with 'The Odyssey'

Thu, Mar 29th 2018 02:20 pm
Public auditions to be held April 14
Musical theater returns to Artpark with two presentations of "The Odyssey," a new, 90-minute original musical adaptation of Homer's classic story. The show will be presented Aug. 4-5 in the Artpark Mainstage Theater.
For the production, Artpark & Company hopes to enlist 150 locals for a summer of high adventure and true love. These people will join professional actors, regional performance groups and Artpark Theatre Academy students.
In "The Odyssey," Odysseus leads his crew to wrestle monsters, resist treacherous temptations, and face the darkest dangers of the high seas to ﬁnd the way home. A theatrical celebration for the whole family, this musical adaptation of the epic tale is designed to bring the entire community together.
The Artpark production will be directed by Roger Danforth (New York City's Drama League) and stars Terence Archie (Apollo Creed in Broadway's "Rocky," Odysseus in "The Odyssey" at Seattle Rep) as Odysseus, Emily Skinner (Broadway's "Jekyl & Hyde," "Prince of Broadway" at Manhattan Theatre Club) and Christopher Guilmet (Duke in "Man of La Mancha," Reprise! Theatre in Los Angeles).
Inspired by the nationally recognized program "Public Works," built by New York City's Public Theater, the Lewiston program seeks to engage audiences in new ways by making them creators, and not just spectators. Working with community‐based organizations, Artpark invites a wide diversity of people to participate in workshops and classes, attend performances, and to join in the creation of an ambitious work of participatory theater led by working theater professionals.
Public auditions will be held from 2-4 p.m. Saturday, April 14, at the Mainstage Theater. Artpark & Company seeks volunteer, amateur performers of all ages, genders, ethnicities and experience, including senior citizens, choristers, theater students, musicians, dancers and people with special talents. Everyone who participates in the auditions will be included in the production.
No role has specific vocal requirements; all roles are flexible and will be created based on one's special talent. All are encouraged to audition, including those physically abled and persons with disabilities. All ethnicities are desired and welcomed.
Contact Artpark Production Manager Susan Stimson at [email protected] with any questions or to RSVP for an audition. No appointment is necessary, but an RSVP is helpful.
At 2 p.m., auditioners should come to the stage door of the Mainstage Theater, 450 S. Fourth St. The stage door is located around the corner from Artpark box office.
The performances will be preceded by a four-month teaching artist program conducted by Paschal Frisina III and Toni Dentico, and provided by Artpark to such community organizations as People Inc., Veterans One-Stop Center of WNY, Buffalo Public Schools Center for Adult Education- ESL Program, Empower and D'Youville Student Veteran Association. Members of these groups, plus the Artpark Theatre Academy students, Artpark Volunteer Corps, Lewiston Fire Co. No. 1, Mount Erie Baptist Church Choir, the Iroquois Indian Band, the Slyboots School of Music, Art and Dance, service men and women, and volunteers from around the region will be featured in the two performances on stage at Artpark.
The program is supervised by Artpark Director of Family Programming Tanis Winslow.
"The Veterans One-Stop Center of WNY is excited to partner with Artpark in their presentation of The Odyssey, empowering our veterans by learning, working and participating in a theatrical stage production," said Chuck Marra, president and CEO of the Veterans One-Stop Center of WNY Inc.
"This way of theater-making is built into the DNA of Artpark and should prove to be a powerful experience for all involved," Artpark Executive Director Sonia Clark said.
Tickets for the performances, $25 for reserved seating, are available by phone at 716-754-4375 or in person at the box office. Online sales begin at 10 a.m. April 4 through tickets.com and artpark.net.
Visit artpark.net for more information.
Categories
Artpark Entertainment NFP Our Favorite Sentinel Top News Features