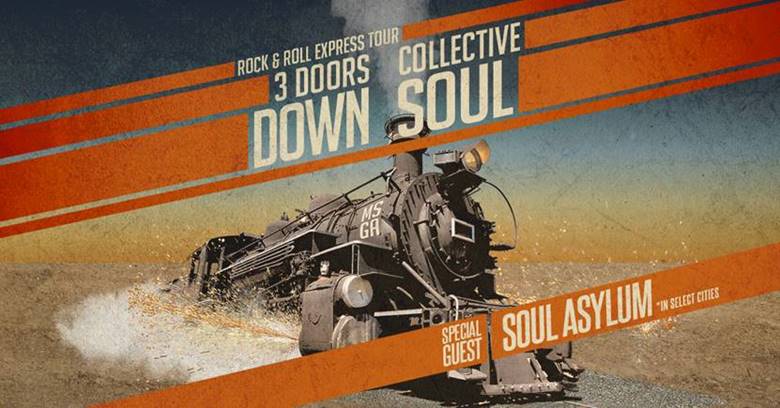 Mon, Mar 26th 2018 10:20 am
General public on-sale set for March 30 at www.3doors.down.com
With more than 30 million albums sold, 18 million digital single sales, billions of streams and 12 iconic hits combined, 3 Doors Down and Collective Soul are inviting fans aboard "The Rock & Roll Express" Tour this summer.
Produced by Live Nation, the amphitheater outing will kick off July 6 in Atlanta and travel to 36 cities across North America before wrapping Sept. 16 in Phoenix. The show will visit the Seneca Events Center inside Seneca Niagara Hotel & Casino in Niagara Falls on Aug. 18.
3 Doors Down will bring the "On-Stage VIP Rock & Roll Express Viewing Platform" to fans on this tour. This package offers VIP on-stage viewing From the "Rock & Roll Express Deck," situated on stage for their entire set, along with meeting the band, a premium ticket for Collective Soul's set and more. All VIP packages will be available starting at 10 a.m. local time Tuesday, March 27. More information can be found at www.3doorsdown.com.
Watch the tour announcement:
Soul Asylum will join the band on select dates, but not in Niagara Falls.
3 Doors Down's Brad Arnold said, "Soul Asylum, Collective Soul and 3 Doors Down - that's a big night of hits! I'm looking forward to hopping on the 'Rock & Roll' Express this summer. It's gonna be fun!"
Collective Soul's Ed Roland added, "It's going to be an exciting summer! Not only are we going to be out with a great band, but also some great friends. I look forward to seeing everyone come out and rock with us, 3 Doors Down and Soul Asylum."
Grammy Award-nominated, multi-Platinum-selling Mississippi rock band 3 Doors Down has been captivating audiences around the world for nearly two decades. With 20 million albums sold globally, their success has been fueled by hits including "Kryptonite," "When I'm Gone," "Here Without You" and "It's Not My Time."
Collective Soul rose to international fame in 1993 with the rock anthem "Shine." The multi-Platinum quintet has a catalog of No. 1 hits under its belt, which has helped shape and define alternative rock.
Collective Soul will also perform at 3 Doors Down's 15th annual "The Better Life Foundation Concert" this fall. The event will take place Oct. 27 at Harrah's Cherokee Casino Resort in Cherokee, North Carolina. To date, The Better Life Foundation has donated more than $3 million to veterans, children, women's and humanitarian relief efforts domestically and around the globe.
Categories
Entertainment Entertainment feature On Stage feature Top Entertainment News Top News Features