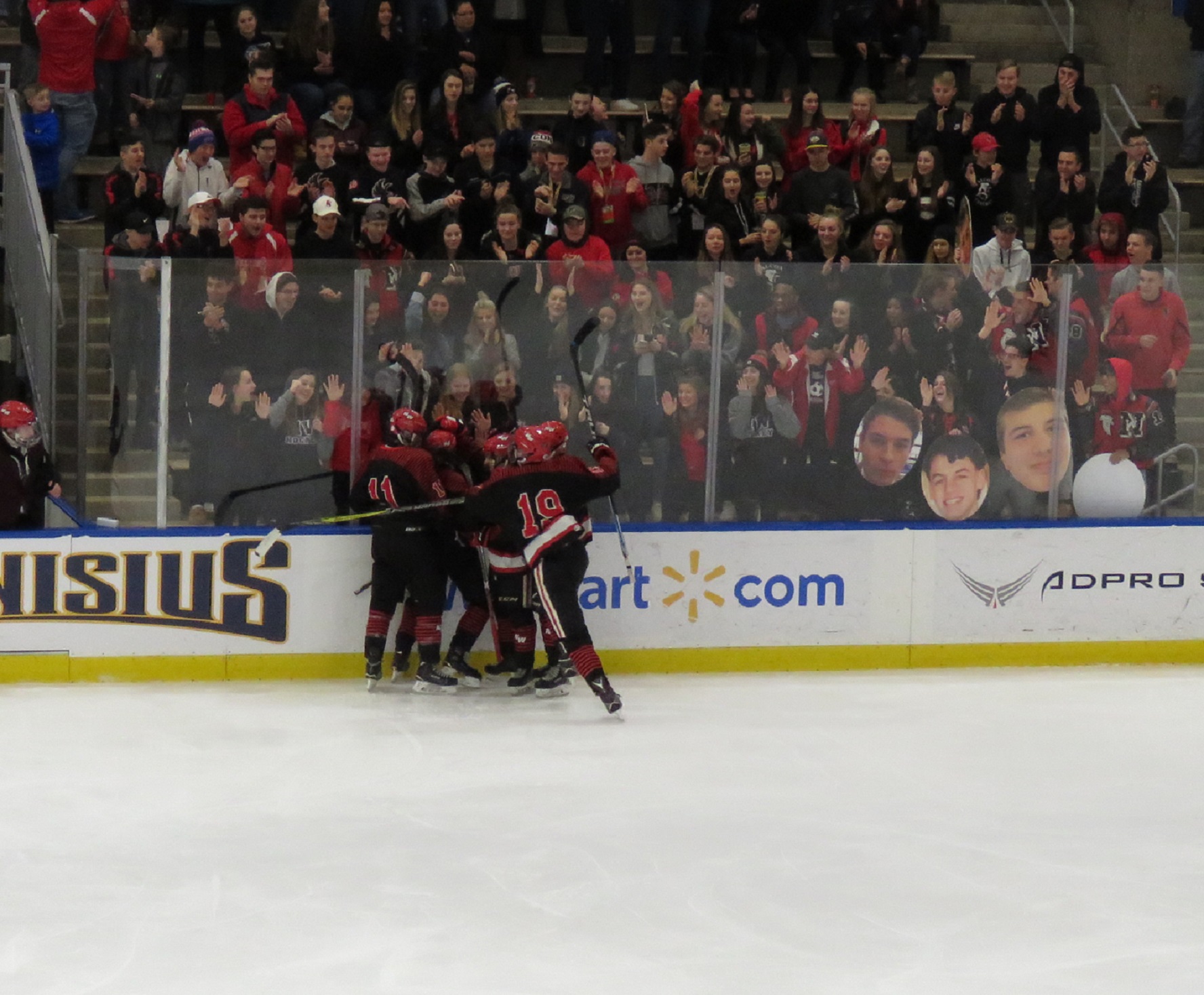 The Niagara-Wheatfield Falcons celebrate their second goal on the game. (Photo by David Yarger)

Sat, Mar 10th 2018 12:55 pm
Niagara-Wheatfield shuts out North Rockland to reach first state championship
By David Yarger
Tribune Editor
The Niagara-Wheatfield community has been down in the dumps the last few days, but Saturday morning, the Falcons hockey team gave some joy to those hurting.
The Falcons defeated the North Rockland Raiders in the New York state semifinals, 4-0.
The win sends the Falcons to their first state title game in program history. The moment hadn't settled in for coach Rick Wrazin, but he said he was proud of his team.
The Falcons and the N-W community was dealt a tough blow this past week, as student and friend Michael Ziegler passed away. To honor Ziegler, the Falcons donned stickers on the back of their helmets that said "MZ." The team said they were playing for more than a state title and were trying their best to "win it for Ziggy."
Senior captain Nick Peters said, "I always like to believe in the toughest times some of the greatest moments can be born from them. A state title for this community would be the greatest thing."
Zack Belter, a friend and teammate with Ziegler on the lacrosse team, said about the stickers, "It's so cool that we could get them right away. You can just tell when everyone throws their helmets on it's more than just a game."
In the first period, both teams traded equal pressure, garnering six shots on goal apiece.
The Falcons drew first blood, though, as with 1:50 left in the period N-W went on the powerplay. On the 5-on-4, Belter ripped a slap shot from the point, which tipped off the stick of Peters and past the Raiders goaltender.
The goal brought a stew of emotions to the team.
Belter said, "It was definitely a super cool feeling. There was so much emotion when I got back to the bench."
The Falcons went into the first intermission leading, 1-0.
In the second period the Falcons attacked the Raiders immediately and didn't let up.
With 10:03 left in the second period, Nick Breier received a perfect pass from Peters and Breier converted the breakaway to give the Falcons a 2-0 lead.
Twenty-five seconds later, Michael Lotempio took a pass from Breier and netted the Falcons third goal of the day.
Late in the period, Chace Woods stole the puck from the Raiders and went in looking for a shorthanded goal. Woods made several moves and got a shot on net, but North Rockland goalie Angelo Zodda made a terrific save to keep Woods off the board.
The Falcons went into the second intermission in control, 3-0.
In the third period, the Falcons got into penalty trouble and the Raiders began to control the puck more. With that, Wrazin decided to call a timeout and get his team back in control.
"We were starting to run around more and we were starting to get out of playing our game ... at that point it's defense first, so we just put it back in their heads that you do what brought you here," Wrazin said.
After the timeout, the Falcons answered their coach as Chris Tobey dished a pass to Woods who shot the one-timer past Zodda, giving the Falcons a 4-0 lead, which would be the end result.
Wrazin praised the work his team did in the second period and said it was a big turning point in the game.
"That was huge," Wrazin said. "Anytime in a big game we can get a couple goals in a hurry it takes the steam out of a team. ... Had we not gotten both of them, the game would've been a little different going down the stretch."
In five playoff games, goaltender Peyton Siegmann has given up one goal and the defense has been stellar.
Wrazin said, "We changed things up a little bit defensively from what we've done in the past, ... it's really created a situation where we don't give up a whole lot from in tight. Our defensemen have been tough in front of the net.
"Siegs has been focused. He gets in there and I don't think he puts any pressure on himself and says its just another day at the office."
The Falcons also had to kill several penalties in the semifinal game. Wrazin was happy with his penalty kill units.
"We've been a pretty good kill team all year," Wrazin said. "It's positionally sound, they go out, they know their job and they do it. ... The way to go forward is just everybody do your job and they've been doing a nice job of that."
The Falcons will look to win their first state title versus either Massena or Victor at noon tomorrow, back at the HarborCenter. 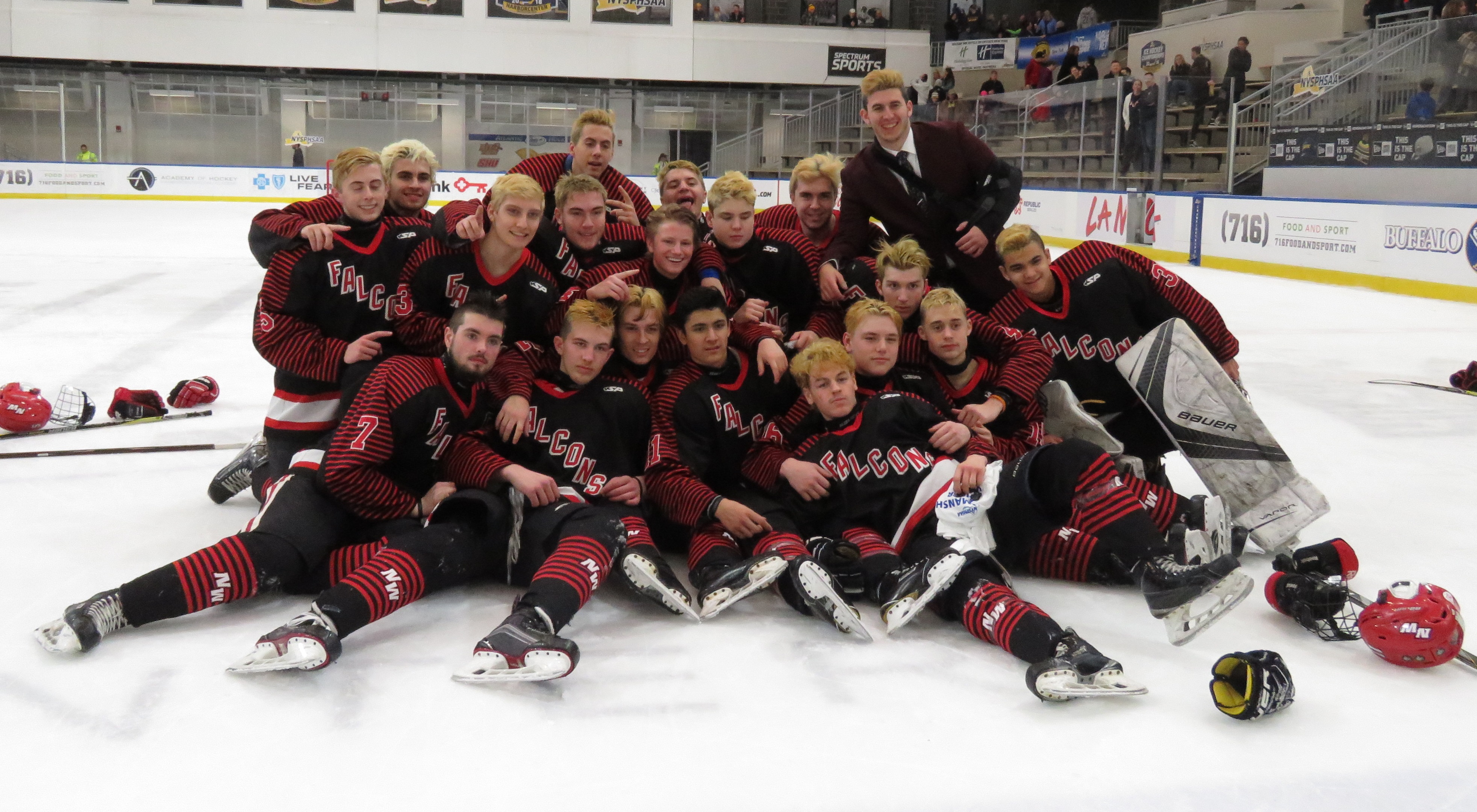