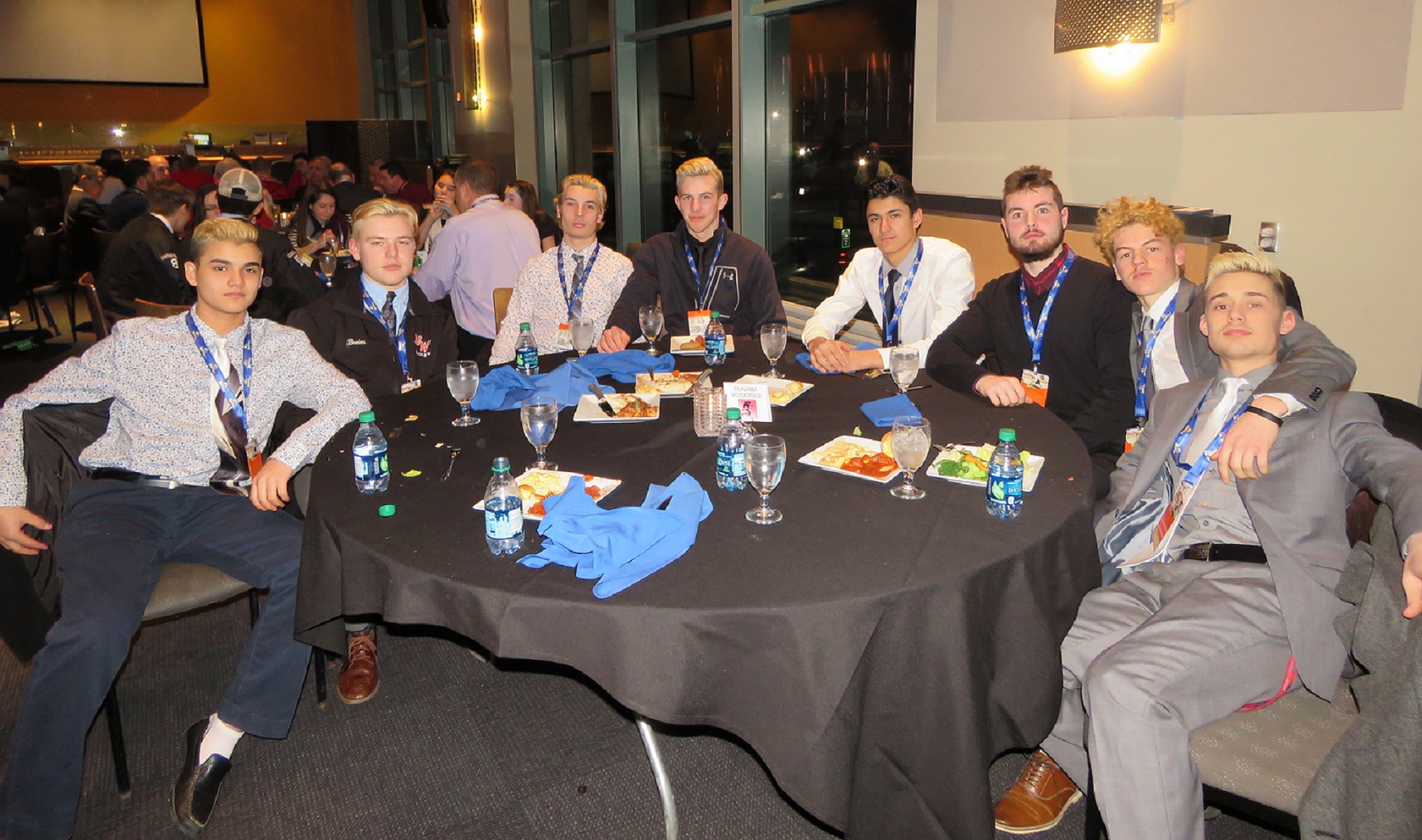 'Win it for Ziggy': Niagara-Wheatfield hockey ready for state tournament

Fri, Mar 9th 2018 10:25 pm
Falcons looking to brighten community's spirits with state title
By David Yarger
Tribune Editor
The Niagara-Wheatfield hockey team is playing some of their best hockey at the right time.
Winners of six straight, the Falcons are looking to make a push for their first state championship in school history.
The team was dealt a tough blow this past week, though, as they learned classmate and friend Michael Ziegler had passed away.
The mood around the N-W community has been emotional, but at Friday night's state tournament dinner the Falcons said they're looking to brighten up everyone's spirits with a title run this weekend.
Zack Belter, senior defenseman for the Falcons and a close friend to Ziegler, said, "We're looking to win it for Mike this weekend. I played lacrosse with him and he was always a team first guy and he'd go through a wall for you and that's what we gotta do this weekend."
Senior captain Nick Peters added, "I always thought when tough things happen, it's moments like these that can uplift the community and I think a state title can be great for our community this time."
Standing in the way of the Falcons and a possible state championship battle is North Rockland High School from around New York City.
The Falcons played two New York City teams back in December when they traveled to the Big Apple. The team defeated Scarsdale, 4-0, and John Jay, who is in Buffalo for the state tournament, 5-1. North Rockland was defeated by both the teams the Falcons beat, but coach Rick Wrazin, Peters and Belter said they're going to get a battle.
"I think they're physical teams," Belter said. "If we play disciplined and stay out of the box I think we can capitalize on the powerplay."
Peters added, "Depending where you're playing it's a certain style of play and it's always good to get experience and hopefully it'll help us tomorrow."
Wrazin was ready for a second straight battle versus an unknown team, as he said, "We've seen some film on them. We know what they do, I'm sure they've seen us. It's a game with two unfamiliar teams, even though we've played down in that section. They're a little different than what we've seen, but we think we're prepared."
At the beginning of the season there was a few unknowns about this Falcons hockey team, as the team didn't reach the sectional finals, which is a rarity for the program. Regardless of last year, though, the Falcons said they had the potential to reach the state tournament since day one.
"Yeah, definitely," Belter said. "We always knew our potential. We're just happy to be here and looking forward to a good weekend."
Peters added, "We knew how much talent and heart we had in our locker room and it's just nice to see it paid off."
Wrazin said, "We spent the whole season telling them they belonged here, and I think they knew from the start ... and they've been ready for a while."
North Rockland is currently 20-4 and winners of 12 straight games. The trio said they just have to play their brand of hockey and hopefully everything works out for them in the end.
"We just have to be us; play our game, play the way we wanna play and don't let teams get us off of what it is that we do," Wrazin said.
Belter added, "Dictate the pace, play our style and we should be all set."
Peters added the team needs to "sell out" on every play and hopefully it ends with a state championship.
The semifinals between the Falcons and North Rockland starts at 9:30 a.m. tomorrow at the HarborCenter.
Categories
School
comments powered by Disqus