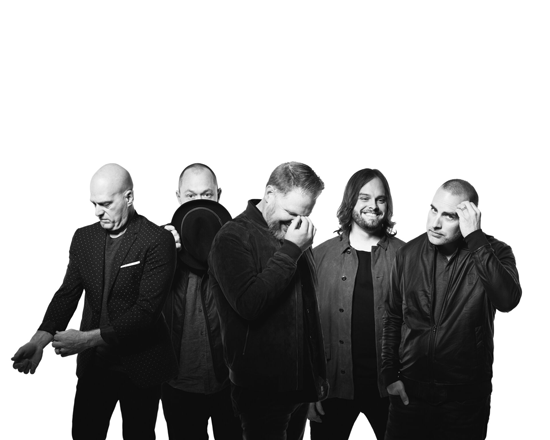 Mon, Mar 5th 2018 03:10 pm
Movie version of megahit enters radio airwaves alongside second single, 'Grace Got You' Feat. John Reuben
Multi-Platinum-selling band MercyMe just released "I Can Only Imagine - The Very Best Of MercyMe," a 13-piece collection of their most beloved songs. The album is accompanied by a special version of the monumental hit "I Can Only Imagine," made just for the anticipated movie of the same name called "I Can Only Imagine (The Movie Session)."
Carefully selected by MercyMe, the track listing for this album includes the band's biggest hits, such as "Flawless," "Word Of God Speak" and "God With Us," plus the original version of "I Can Only Imagine."
The Grammy Award-nominated band attended the world premiere of "I Can Only Imagine" last week alongside host Scott Hamilton and members of the cast, including Dennis Quaid, Trace Adkins, J. Michael Finley, Madeline Carroll and Priscilla Shirer. The true story is based on the life of Bart Millard, who wrote the megahit song after the loss of his father to cancer. The film opens in theaters March 16.
Carrying the same name, Millard's first memoir released last month.
"I Can Only Imagine (The Movie Session)" is now being played by radio stations nationwide, in addition to "Grace Got You" feat. John Reuben, which impacted radio on Friday. This marks the second single to impact radio from MercyMe's latest Grammy-nominated, chart-topping album, "Lifer." This single was preceded by "Even If," which had an unprecedented 19-week run at No. 1.
Stream or download "Grace Got You" on Spotify, Apple Music and Amazon Music.
Surprising fans with a special moment during Sunday night's sold-out "MercyMe Live" tour stop, the band invited Dennis Quaid and the Sharks to join the bill, marking their inaugural Nashville performance at the iconic Ryman Auditorium.
"MercyMe Live" is currently trekking throughout the U.S. with Tenth Avenue North alongside Tim Timmons until April. For the latest information on MercyMe, visit www.MercyMe.org.
Get connected with MercyMe
Categories
Entertainment Entertainment feature Top Entertainment News