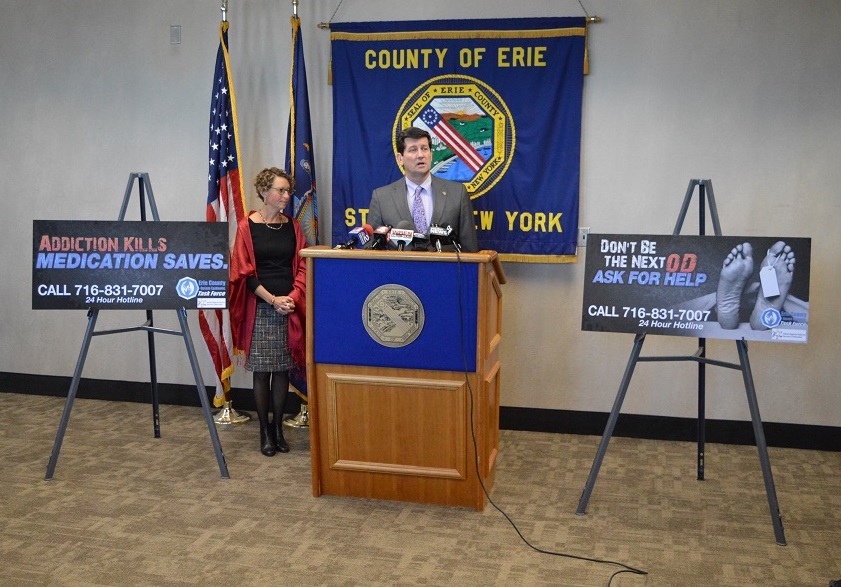 Erie County Executive Mark C. Poloncarz (at podium) is joined by Health Commissioner Dr. Gale Burstein to review the county's opioid fatalities from 2017. As of Feb. 27, the county medical examiner's office has confirmed 233 opioid overdose fatalities for 2017, with another 35 suspected but still pending confirmation. In 2016, 301 individuals died of opioid overdoses in Erie County.

Tue, Feb 27th 2018 10:55 pm
Closed cases through Feb. 26 indicate decline in overall overdose fatalities in 2017; 35 cases are still pending; Erie County numbers lower than NYS, region - fentanyl and heroin-related opioids found in nearly 80% of fatalities
Erie County Executive Mark C. Poloncarz on Tuesday joined county Health Commissioner Dr. Gale Burstein to review the latest county data on the opioid epidemic and fatalities associated with it, noting the Erie County Medical Examiner's office has confirmed 233 opioid overdose fatalities for 2017, with another 35 cases suspected but still pending confirmation. In 2016, 301 individuals died of an opioid overdose in Erie County.
"Even one fatality from opioids is one too many, but it is encouraging to see that the numbers of opioid fatalities in 2017 will be lower than those in 2016 - at the worst case a 10 percent reduction from year-to-year - and when the final cases are closed it could be even better," Poloncarz said. "This shows our efforts to fight the opioid epidemic in Erie County are bearing fruit and we are heading in the right direction. While this is very good news, this epidemic is still rising in other parts of New York and around the country, so it is important to keep working locally to educate, inform, empower and partner with our residents and all stakeholders in this public health issue. We all have a role to play in keeping ourselves and our community safer and healthier."
In their most recent report on opioid overdoses the Centers for Disease Control and Prevention noted overdose fatality rates in New York increased 7.7 percent from July 2016 - July 2017, while in New York City opioid fatalities increased by 19.3 percent over the same time period. Similar results were seen around the Northeastern U.S. in the period, with New Jersey reporting a 34.7 percent increase in overdose fatalities, Vermont reporting a 26.4 percent increase, Ohio showing a 39 percent increase and Pennsylvania reporting a 43.4 percent increase in opioid fatalities in the same time period.
"The national numbers, combined with what we are seeing locally, are further evidence of the destructive nature of opioids, but also of the need for a coordinated, community-wide response to this deadly epidemic," Burstein said. "In Erie County, we confronted the issue directly and early on, taking steps to enlist community partners to attack the opioid epidemic from many angles and bringing as many allies into the effort as possible. What is also notable is that, so far in 2018, we have 43 suspected opioid overdoses, while at this same time in 2017 we had 52 confirmed opioid overdose cases. We are making progress, but more work remains to be done."
The latest Erie County data shows that, among the 2017 confirmed opioid overdose deaths, 84 percent were white and 74 percent were male. Although 26 percent of Erie County's population is between the ages of 20-39 years of age, this age group accounted for 56 percent of the opioid-related fatalities. Opioid overdose death victims resided throughout Erie County; 43 percent of the opioid fatalities in 2017 lived in the suburbs; 44 percent lived in the City of Buffalo; and 9 percent lived in rural areas. In addition, 78 percent of the Erie County opioid-related fatalities involved fentanyl, and 28 percent involved heroin.
For more information on the Erie County Department of Health, visit http://www2.erie.gov/health/.
Categories
Dispatch Home feature NFP