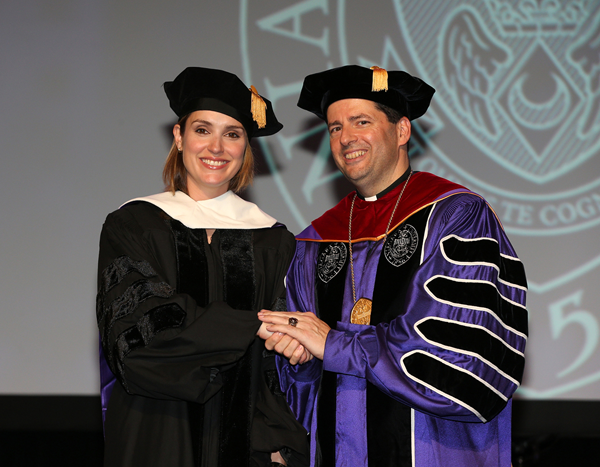 Margaret Brennan, left, was named the new host of "Face the Nation" on CBS. In 2015, the Rev. James J. Maher, C.M., president of Niagara University, presented her with an honorary doctor of humane letters.

Thu, Feb 22nd 2018 04:50 pm
Margaret Brennan, who was presented with an honorary doctor of humane letters during Niagara University's 2015 undergraduate commencement ceremony, was named by CBS today as the next moderator of "Face the Nation," the Sunday morning political talk show.
Brennan officially takes over this Sunday, replacing John Dickerson.
A native of Stamford, Connecticut, Brennan was recognized by NU on May 16, 2015, for her remarkable abilities as a broadcast journalist.
Brennan has worked at CBS since 2012 as a senior foreign affairs correspondent, a role that she'll continue while moderating one of the most influential platforms in American politics.
"All of us at Niagara University congratulate Ms. Brennan on her well-deserved appointment today," said the Rev. James J. Maher, C.M., president of Niagara University. "The thoughtful manner in which she delivered an inspiring message to our graduates in 2015 was indicative of her rare blend of intelligence, thoughtfulness and humor."
To learn more about Niagara University, visit www.niagara.edu.
Categories
Entertainment feature Home feature NFP Our Fave Photo OYT