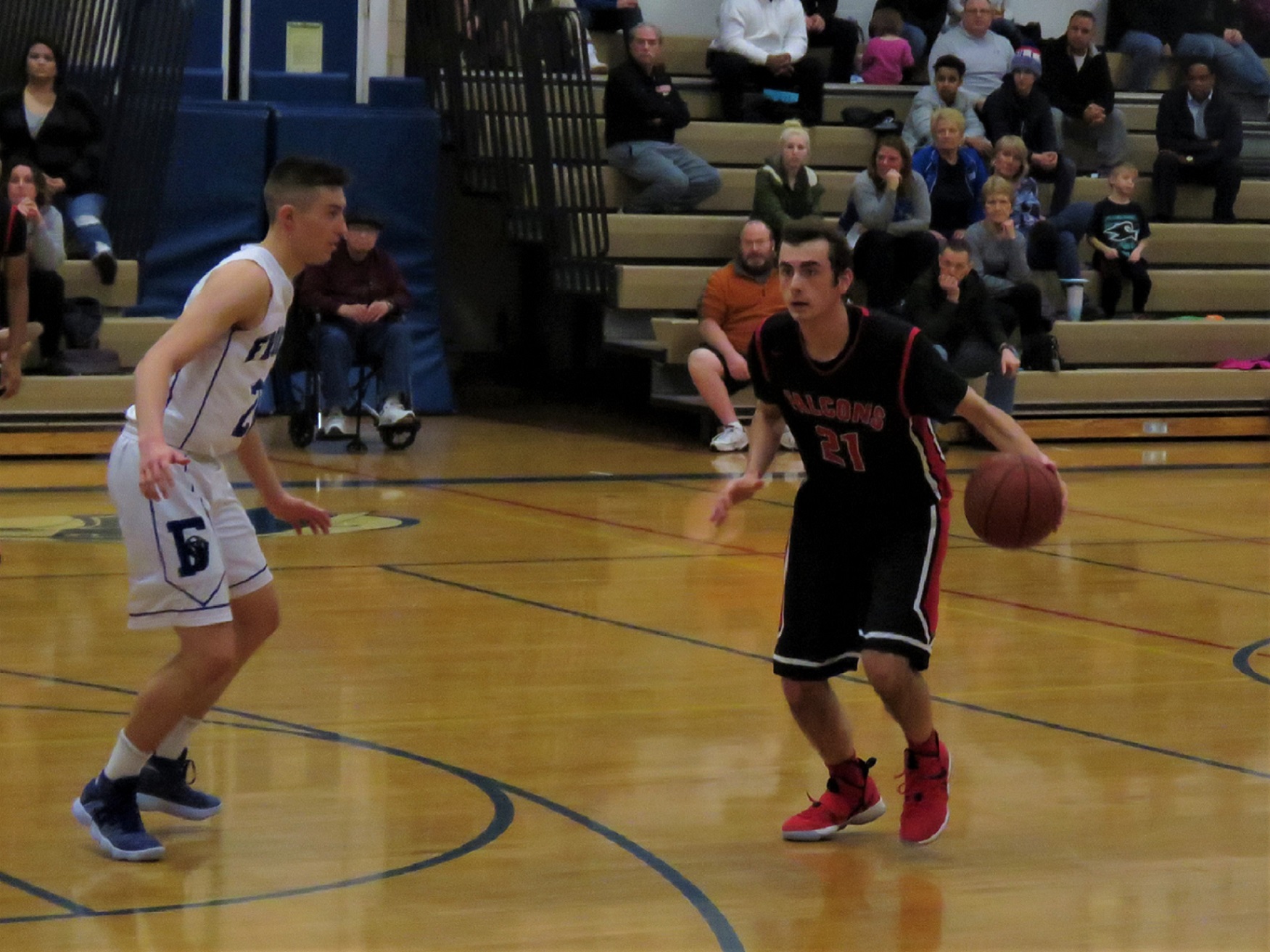 HS Hoops: Niagara-Wheatfield falls to Frontier in opening round of sectionals

Wed, Feb 21st 2018 10:35 pm
Battle of the Falcons ends in favor of Frontier
By David Yarger
Tribune Editor
It's been the story all year for the Niagara-Wheatfield basketball team. The team competes and keeps the game close, but the opposition goes on a second half run to pull away. The story lived on Wednesday night and ended Niagara-Wheatfield's season, as the Frontier Falcons used a big 39-15 second half to pull away N-W.
The game was a first round matchup between the No. 8 seed Frontier and No. 9 seed Niagara-Wheatfield and the first game of the Section VI Class AA playoffs.
In the first quarter, Frontier got off to a hot start, leading 9-0. N-W finished the quarter scoring the last 5 points, including a Ben Devantier steal and dish to Anthony Ruffino for a layup before the final horn.
In the second quarter, N-W continued their run with 8 quick points to start the period.
The rest of the way through halftime, the game was back and forth, with three lead changes and two ties.
After Zack Stanley made two free throws to give N-W the lead, 21-19, a couple possessions later, Alex Hiam hit a 3-pointer to give Frontier the lead heading into the break, 22-21.
From the third quarter on it was all Frontier. The Falcons scored the first 9 points of the quarter before Devantier drained a 3-pointer. Frontier went on to win the quarter, 19-7, and they led after three quarters, 41-28.
Frontier continued to pull away in the fourth quarter, scoring 20 more to their total, while N-W just had no answer.
Cam Miller sunk the last bucket of the season for Niagara-Wheatfield and at the last horn, the Falcons season ended in defeat, 61-36.
For the Falcons, the senior Ruffino led with a team-high 8 points and seniors Nick Clouden and Devantier added 6 and 5, respectively.
On the big Frontier run, coach Erik O'Bryan said he just saw a whole lot of nothing going on on the court.
"Lot of standing around. Lot of watching. Shot goes up; no offensive rebounds," O'Bryan said. "There's only two things you can do; you can either go get the rebound or you get back on defense. At times, our guys had a third; stand and watch."
O'Bryan credited his defense though, saying they were switching on a lot of screens and guarded the perimeter well. He added that the offensive struggles began to wear on his team down the stretch.
O'Bryan brushed aside the record and the numbers at the end of the game and praised his team for the work they put in all season.
"They're all great kids and they all have great futures. These seniors are all gonna go on to college and at the end of the day, no, it's not a disappointment at all. ... We got a group of hard working kids, they're good kids and raised right that have good grades and are gonna go to college and this will be a blurb on their radar as they get older," O'Bryan said
O'Bryan will have to say goodbye to six seniors this year — Clouden, Devantier, Jared Domaradzki, ­­Ruffino, Billy Scullion and Tom Sommers — and he thanked them for everything.
"You thank them for their dedication. They've put in a lot of hours, whether they're good hours or not; whether you won a lot of games or you didn't. They've been here since four years ago with JV. ... They've all put in their time and deserve their respect. No one wants to go out, but unfortunately at the end of the day, everybody is other than a couple teams," O'Bryan said.
The Falcons final record was 6-15.
Frontier will play No. 1 seed Niagara Falls on the road at 7 p.m. Friday.
Categories
School
comments powered by Disqus