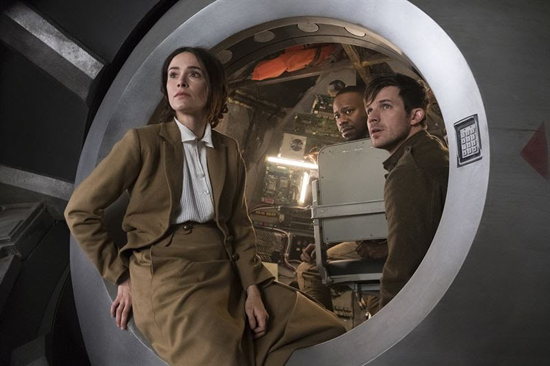 "The War to End All Wars" is the "Timeless" season two debut. Pictured, from left, are Abigail Spencer as Lucy Preston, Malcolm Barrett as Rufus Carlin and Matt Lanter as Wyatt Logan. (NBC photo by Justin Lubin)

Mon, Jan 22nd 2018 04:50 pm
3-hour special brings athletes together from around globe and serves as lead-in to second-season debut of network's popular era-jumping series
Looking to create strong family-friendly viewing on Sundays beginning March 11, NBC will air its annual three-hour "American Ninja Warrior: USA Vs. the World" special at 7 p.m. ET/PT and conclude the night with the highly anticipated second-season premiere of "Timeless."
As previously announced, family viewing continues Sunday, March 18, with the second-season premiere of the hit alternative series "Little Big Shots," hosted by Steve Harvey, and the debut of the Neil Patrick Harris-led game show "Genius Junior." That will be followed by "Timeless," whose 10-episode season will air each week at 10 p.m. Sundays.
Last year's telecast of "American Ninja Warrior: USA Vs. the World" ranked as the No. 1 non-sports-related show of the night on the broadcast networks in adults 18-49 and, in "live plus seven day" figures, the special rose to a 1.4 rating in 18-49 and 5.1 million viewers overall.
In its first season, "Timeless" averaged a 2.1 rating in adults 18-49 and 8.0 million viewers overall in "live plus seven day" ratings from Nielsen Media Research. "Timeless" tied for No. 1 versus regular broadcast competition in its timeslot in adults 18-49 and adults 18-34. It also generated strong high-income and high-education audiences, indexing at a 124 among adults 18-49 living in $100,000-plus homes and a 126 among adults 18-49 with four or more years of college (with 100 representing an average concentration of those viewers).
Critics heaped praise on the show's first season. The Washington Post said the series was "casually fun and intriguingly executed," while the Los Angeles Times said "Timeless" was a "high-minded adventure thriller," and The New York Times called the show "a good-natured science-fiction adventure series."
'American Ninja Warrior: USA Vs. the World'
Only two weeks following the conclusion of the Winter Olympics, this special will once again bring athletes from around the globe together for intense competition. Four teams from North America, Europe, Latin America and Asia will battle on the tough, four-stage national finals course featured in "American Ninja Warrior."
Team USA features impressive veteran ninjas Drew Drechsel and "The Weatherman" Joe Moravsky. A speedy competitor, Drechsel has qualified for the finals in Las Vegas five times and made it to stage three two times. Five-time competitor Moravsky has made it to stage three on the Las Vegas finals course three times, more than any other athlete in the competition.
Also joining Team USA this year are former nationally ranked gymnast and head coach/trainer Najee "The Phoenix" Richardson and Sean Bryan, the "Papal Ninja." Bryan is also a former competitive gymnast and NCAA athlete who enjoyed a breakout season on "American Ninja Warrior" this past summer.
Contestants will tackle "American Ninja Warrior's" punishing Las Vegas finals course in a head-to-head format that pits members from each team against one another.
Matt Iseman and Akbar Gbajabiamila host, and Kristine Leahy co-hosts.
'Timeless'
From Eric Kripke ("Revolution," "Supernatural") and Shawn Ryan ("The Shield"), season two of this thrilling action-adventure series will pick up right where audiences left off with the heroes: Continuing to race throughout history. The team includes Rufus (Malcolm Barrett), a scientist; Wyatt (Matt Lanter), a soldier; and Lucy (Abigail Spencer), a history professor, each working to prevent the destruction of the world as we all know it.
This season they'll find an unlikely ally in their quest to ruin Rittenhouse, a deadly organization with plans to change history and reshape reality - even though Lucy's family has been a part of Rittenhouse for centuries. Still making every effort not to affect the past themselves, they will visit 1692, 1917, 1941, 1981 and more. They'll be introduced to the likes of Marie Curie, Hedy Lamarr, William Randolph Hearst and a multitude of other influential people throughout history.
The cast includes Goran Višnjić ("ER," "The Girl with the Dragon Tattoo"), Paterson Joseph ("In the Name of the Father," "Aeon Flux"), Sakina Jaffrey ("House of Cards," "Mr. Robot") and Claudia Doumit ("Scandal," "New Girl").
Categories
Entertainment OYT Top Entertainment News